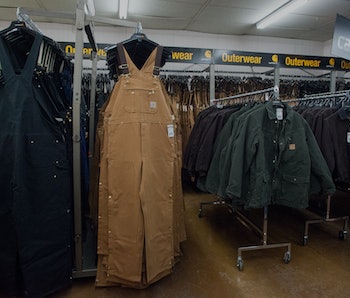 Carhartt has implemented a vaccine mandate for its employees, leaving some workers and customers distraught over the decision. The brand, beloved by both blue-collar workers and indie workwear enthusiasts, announced in an email to employees that its vaccination policy requires all workers to be vaccinated by February 15.

“We put workplace safety at the very top of our priority list and the Supreme Court's recent ruling doesn't impact that core value,” Carhartt CEO Mark Valade wrote in the email, referencing the Supreme Court’s recent decision to block the Biden administration from enforcing a COVID-19 vaccine mandate for large employers. “We, and the medical community, continue to believe vaccines are necessary to ensure a safe working environment for every associate and even perhaps their households. While we appreciate that there may be differing views, workplace safety is an area where we and the union that represents our associates cannot compromise,” he continued. “An unvaccinated workforce is both a people and business risk that our company is unwilling to take.”

“Medical abuse” — Carhartt’s vaccine mandate, which went into effect on January 4, follows many others enforced by large brands, including Nike and Columbia Sportswear. Still, Carhartt’s large conservative following made its decision that much more controversial. Elijah Schaffer, a prominent anti-vaxxer and “federally credentialed reporter” — define that as you will — tweeted that the company was subjecting its employees to “medical abuse” and likened the mandate to rape. “This bologna is going to cost [Carhartt] millions,” Twitter user @TheQuartering chimed in. “There isn't a single person I know that wears their stuff that supports vaccine mandates.”

Carhartt is worn by a number of celebrities, athletes, and blue-collar workers alike.

Keeping workers safe — As a private company, Carhartt is legally able to mandate whatever it pleases — including vaccines — despite claims of OSHA and HIPAA violations from conservatives. And while some of its employees and customers remain unhappy about the decision, many have applauded the brand’s decision to put workers safety first, with some comparing the decision to wearing steel-toed boots and hard hats on the job.

“I’m impressed and I will be purchasing from a company that cares about protecting all its workers,” wrote Twitter user @babettalane, with her sentiment echoed by over 4,000 likes at the time of writing. “Thank you for not making this issue political & for believing in science.”

Meanwhile, those making the issue political criticized Carhartt for abandoning its workwear roots to appeal to “trashy celebrities and college hipsters.” Might I suggest adding “vaccinated” in front of that description?