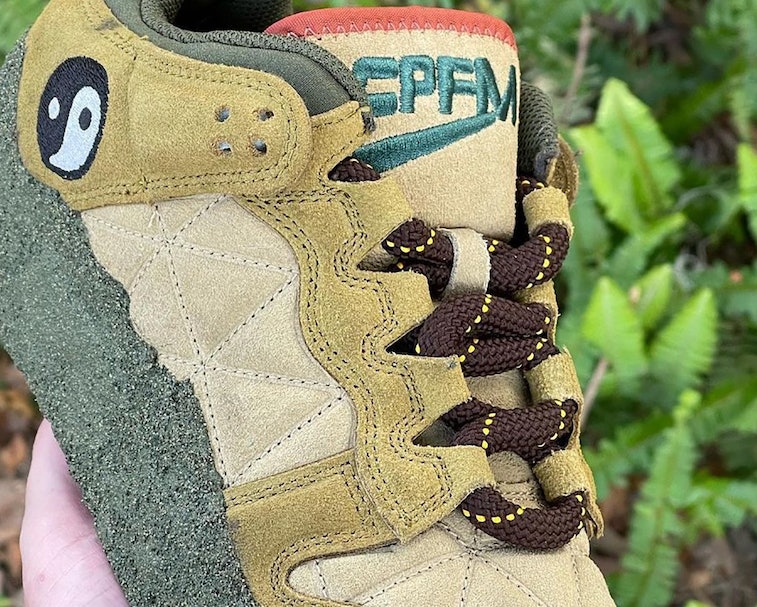 Cactus Plant Flea Market is following up its glamorous Nike Dunk collaboration with another take on the sneaker that’s a polar opposite.

Leaks have revealed a naturalistic makeover for one of the most in-demand silhouettes of the moment, courtesy of CPFM’s mysterious founder and designer Cynthia Lu. A gritty rubber reminiscent of either mud or concrete makes up the sole, while the upper puffs out with quilted stitching and an oversized eyelet in mustard and sand-colored suede.

An oversized Swoosh spills onto the midsole, and further branding comes through on the tongue with embroidery reminiscent of Cactus Plant Flea Market’s signature puff print from its T-shirts and sweats. A yin-yang symbol is mismatched with a backward Swoosh on the sneakers’ lateral foxing, while lace options include paracord and extra wide laces. Completing CPFM’s flourishes is a colorful heat map-like print on the insole with labeling for the left and right shoe, lest you have any difficulties.

A sneaker for or overrun by nature — Cactus Plant Flea Market’s second Dunk aligns itself more with the brand’s DIY aesthetics than its previous version of the sneaker, which was covered in Swarovski crystals and glistened like a disco ball. Climbing and gardening, two activities whose aesthetics have become widely adopted within fashion and streetwear, provide clear inspiration for the more rugged successor.

Because we’re early on in the leak cycle, a release date for CPFM’s second Dunk has yet to be announced. Spring would seem like a natural peg for such a nature-influenced sneaker, and whenever it drops its sure to become one of the landmark releases of the year. We’re looking at one of the most creative spins on the Dunk in its years-long renaissance, and at the very least getting the midsole dirty should no longer be a concern.