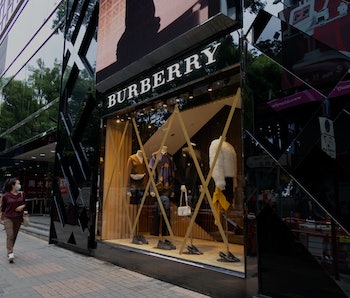 It’s not every day the Science Based Targets Initiative (SBTi) gives its stamp of approval. It's even more rare for the endorsement to reach a luxury brand.

Burberry became the first luxury fashion label to receive the SBTi’s approval, the gold standard of sustainability, for its net-zero emissions targets. The British luxury house has set goals to reach net-zero emissions by 2040 in alignment with the Paris Agreement, which is seeking to limit global warming to just 1.5 degrees Celsius.

Burberry’s plans can be broken down into commitments across three key areas. The first two manage the impact of Burberry’s operations and manufacturing, including electricity and gas in its stores, manufacturing plants, and offices. The third applies to its extended supply chain and the energy it takes to maintain material sourcing and manufacturing partners.

In 2017, Burberry announced intentions to reduce greenhouse gas emissions by 95 percent in the first two areas by 2023 and maintain the same levels through 20240. Two years later, the label announced plans to reduce emissions in the third area by 46.2 percent in 2030 and 90 percent by 2040.

A check mark for the check print — The imminent threat of climate change has led many fashion houses to reconsider their practices. Fast fashion and overconsumption continue to threaten the planet, but SBTi’s CEO Luiz Amaral had nothing but praise for the luxury label. “Burberry’s net-zero targets match the urgency of the climate crisis and set a clear example that their peers must follow,” he said in a statement.

The label’s goals for net-zero emissions are backed by a number of sustainable moves. It boasts a carbon neutral upkeep across its global operations, and its electricity is sourced from renewable resources. In addition to its eco friendly projects, the brand has also donated leftover fabric to students and invested in women’s participation in online gaming.

“We continue to challenge ourselves to drive measurement, improvement, and transparency across our operations and we are committed to continue working with our suppliers and partners to accelerate the adoption of more sustainable practices,” Caroline Laurie, Burberry’s VP of Corporate Responsibility, said in a statement. She also went on to say that she hopes other companies follow suit.

Chanel and Hermès both received approval from SBTI for their emission reduction goals, but Burberry’s targets for net-zero emissions mark a major first for the fashion industry.