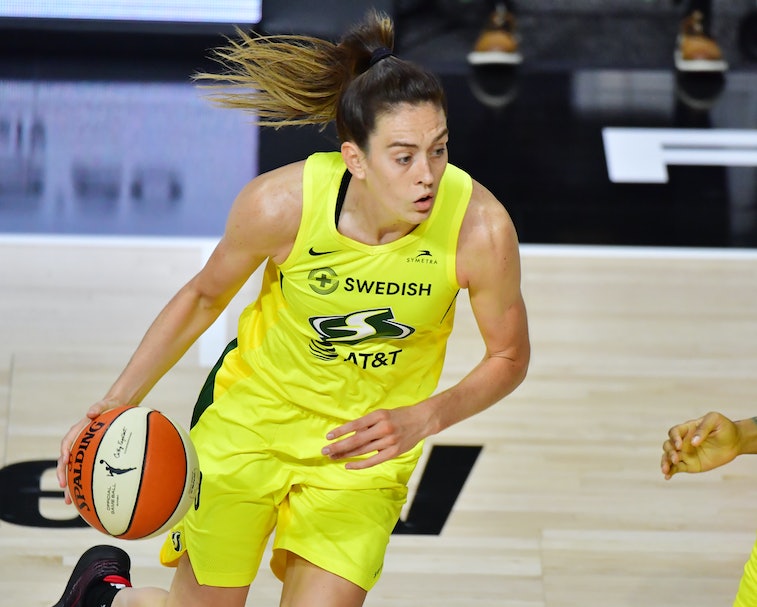 Seattle Storm forward Breanna Stewart has signed a new deal with Puma that will make her the first WNBA player since Candace Parker to get her own signature sneaker. While a signature shoe marks a crowning moment for NBA superstars, the achievement is even rarer within the WNBA. Only nine players in the 25-year history of the league have had their own shoe, and it’s been 10 years since Parker played in her own Adidas kicks.

Stewart signed with Nike in 2016 upon entering the WNBA as the first overall draft pick and a four-time NCAA champion at the University of Wisconsin. In her professional career, she’s won the WNBA Final twice and was named Finals MVP both times. She’s also received the Rookie of the Year award and regular season MVP in 2018.

“Anytime you hear signature, I think that’s jaw-dropping, eye-opening, especially on the women’s side,” Stewart told ESPN. “There haven’t been many. For Puma to be able to put the signature element out there, [and] respect me enough where they think that I deserve a signature shoe is super exciting.”

Stewart is now Puma’s most accomplished player — Since Puma first reentered the basketball space in 2019 with Jay-Z as the creative director, the brand has picked up a hand full of promising players and moderately successful veterans as sponsored athletes. Lamelo Ball, RJ Barrett, Michael Porter Jr., Terry Rozier, Rudy Gay, and DeMarcus Cousins are all on the roster — but none of them have the same pedigree as Stewart.

No NBA player for Puma has their own signature shoe either, and the only person who does is J. Cole, the rapper whose hoop dreams will reportedly take him to the Basketball Africa League. For Puma to take the next step within the sport, it’s going to need a superstar — and it’s Stewart who best fits the bill.

When will we see it? — Puma says it’s just in the beginning of the design phase, which could take 12 to 18 months. This means we could see Stewart playing in prototypes over the course of the next WNBA season, but a public release isn’t likely to come until next year.

So while we’ll have to play the waiting game for the sneaker’s release, at least the 10-year absence of a WNBA signature shoe is over at last.