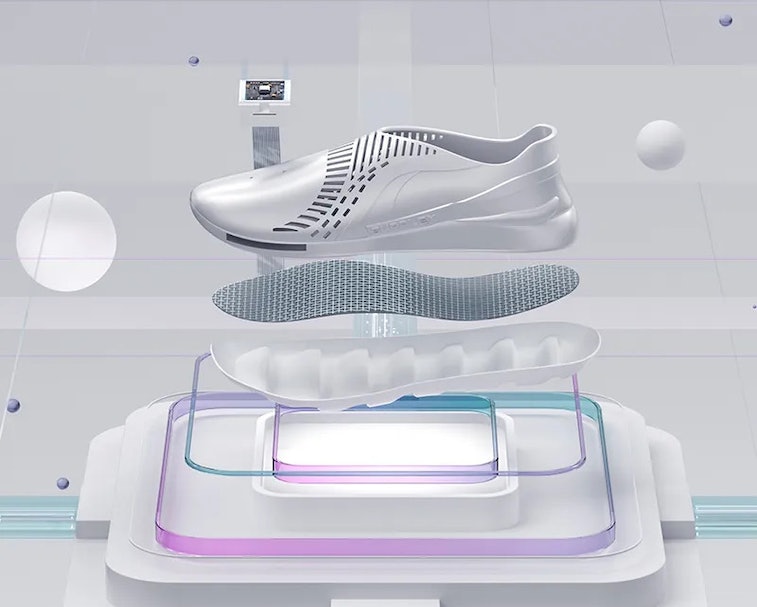 Even in virtual reality, Surplex knows the importance of quality footwear. The VR company’s latest innovation is a set of footwear that can replace the need for a base station or straps. Known as Full-Body Tracking Shoes, the silver sneakers are ideal for gaming or a simple stroll in the metaverse. The project is only a Kickstarter campaign for now, but Surplex also sees potential for use in 3D animation and the medical field.

Each individual shoe is equipped with 240 flexible pressure sensors that work in tandem with an inertial measurement unit. The shoes then sync with Surplex’s deep learning algorithm system to track the wearer’s movement and directly mirror it in real-time in VR. A single charge can last up to six hours, although we don’t recommend spending six hours in virtual reality at once.

Surplex also promises an easy set-up for the system. Unlike other cyber footwear, there are no base stations, dongles, or straps involved. Because of the complex sensors, the shoes offer 360-degree coverage, zero blind spots, and no drifting. A one-minute demo video depicts how the shoe’s movement translates to the mirrored VR character, but Surplex also notes that the algorithm is still undergoing some fine-tuning.

“The power of Surplex lies in our self-developed flexible pressure sensors under each foot and proprietary deep learning algorithms to infer human 3D skeletons accurately,” Surplex founder Axl Chan said in a press release. “The result is the most natural and highly accurate way to interact with the virtual world. Surplex is more than a VR accessory, it represents true freedom for a fascinating new world.”

Stepping toward the future — Surplex’s website gives a peak into what’s in store for the system, including the ability to “rig your characters in film productions, game development, etc.” More interesting is its medical analysis potential. Surplex plans to make a public interface for athletic performance and rehab analyses with access to pressure information and other kinematic data.

Accessing fully digital spaces through bulky headsets and stiff bases doesn’t prioritize comfort as much as functionality. Chan said the shoe idea stemmed from his realization that the interactive tools available on the market to navigate VR are pretty limited. The shoes will also be compatible with various games and apps, including VRChat, Blade and Sorcery, and Neos VR.

Surplex will launch its campaign for the Full-Body Tracking Shoes via Kickstarter “soon.” Because the project is still in development, a price, full list of supported platforms, or release date have yet to be revealed.