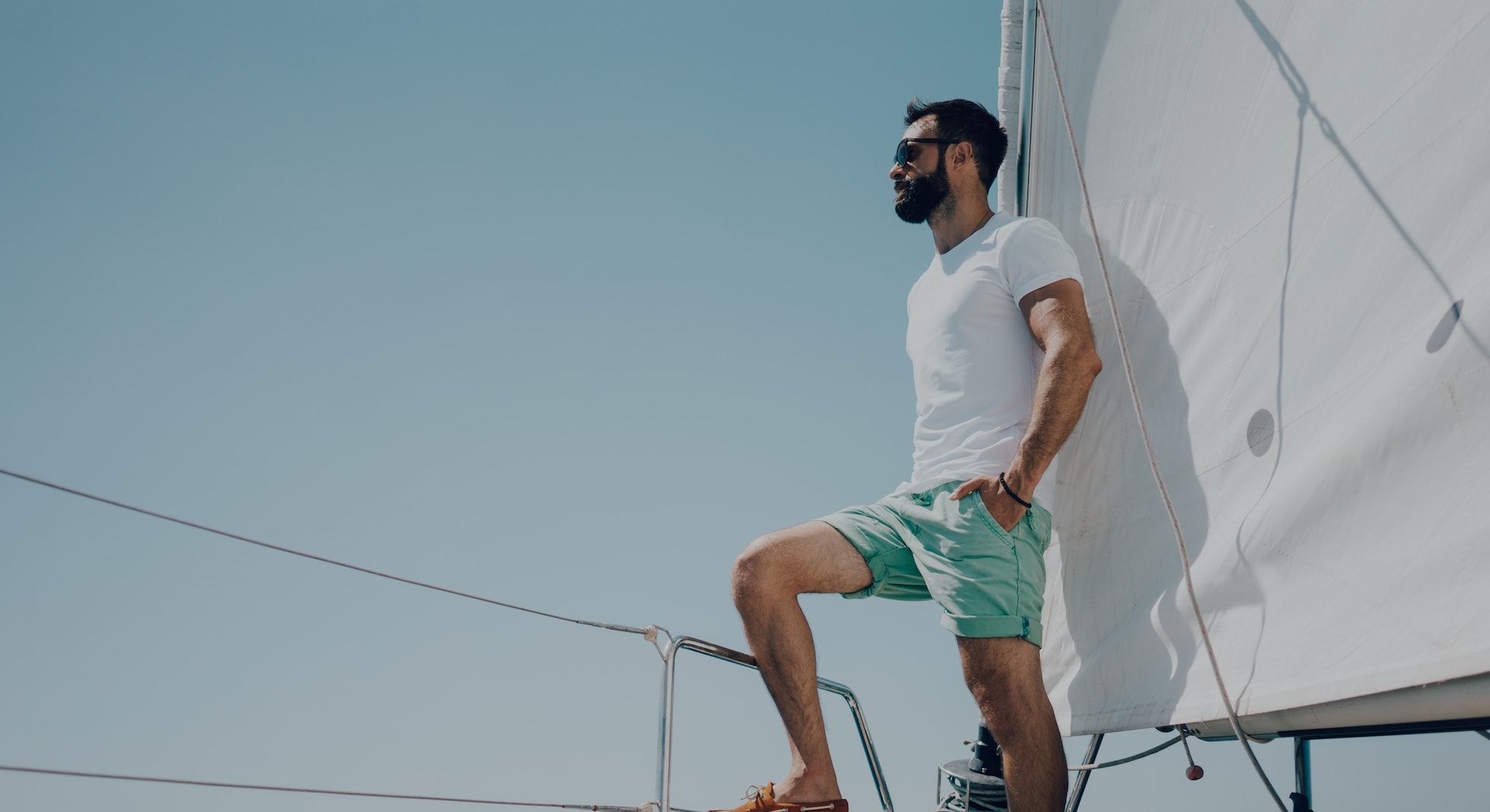 What exactly is a “boat shoe?” The first thing that may come to mind is the classic brown leather shoe, sown like a moccasin with laced tabs on the side and a white leather sole.

But it also looks like the predecessor of Vans, a simple low-cut canvas on top of rubber that’s just as adept at gripping the decks of a water-going vessel as the ones that hold four wheels for skateboarding. It can also look like a basketball sneaker, as worn by American cup teams in the mid-’80s.

Sperry is America’s first brand of boat shoes and has navigated the category through all those iterations, including the frequently-imitated Top-Spider. Now, it’s leading the charge as the category enjoys a revival. Over the past few years, Sperry’s releases have not only reemphasized that a boat shoe can have several different styles, but that it can also have a life outside the archetypes it’s usually associated with. A huge key to that shift has been the brand’s collaborations with Noah and Rowing Blazers, two New York City brands that wade in prep to varying degrees.

“To be blunt about it, a lot of other brands and people have kind of given [the boat shoe] a bad name,” says Rowing Blazers founder Jack Carlson. “There is baggage there. But like a lot of other things that come from this ‘preppy’ canon — and I say that holding my nose because I hate the word — it has somewhat transcended that in reality.”

The connotations of the boat shoe are right there in the name: “boat.” The shoes were originally designed for an activity typically reserved for the privileged and are commonly associated with the WASPiness of the Northeast. In Succession, the HBO show following an abhorrently privileged family based on the real-life Murdochs, Tom roasts his new underling and future inlaw Greg for wearing a pair to his first day at the office.

“Are you kidding?” Tom asks. “Are we talking to each other on the poop deck of a majestic schooner? Is the salty brine stinging my weather-beaten face? Then why the fuck are you wearing a pair of deck shoes?”

For the audience, part of the joke is that a sailing excursion is very much a possibility for this band of characters. It’s such a familiar place that they can put to practice the designation of certain shoes only to be worn on a water-faring vessel. In fact, a colossal yacht ends up being the setting for the show’s season two climax.

When boat shoes are worn away from the water, it’s often been by a fraternity crowd that’s adopted them as part of a uniform consisting of pastel overload and few deviations from brands like Polo Ralph Lauren and Vineyard Vines. For those outside this circle jerk of white male privilege, dressing the part, or even adopting a small part of the part, may not be so appealing. That’s finally starting to change as the fashionable crowd adopts another prep staple. As it turns out, boat shoes can look pretty good when they’re not soaked in Natty Light and elitism.

Noah approaches prep through the lens of Long Island, where founder Brendon Babenzien grew up around the borough’s water-faring culture. For Rowing Blazers, it’s also right there in the name: “rowing,” the sport that brought Carlson to the World Championships as a coxswain. The former posits that skaters and streetwear enthusiasts want something to look a little sharper, while the latter seeks to make the world in which Carlson made his name more inclusive. With different approaches, both have made prep staples like suiting, chinos, and fabrics like seersucker and madras feel less stuffy — enabling them to do the same with boat shoes.

“The boat shoe was destined for a revival.”

Noah began collaborating with Sperry in 2016, starting with a quintessential brown leather Top-Sider given a splash of pink on the insole. Alongside it, for the more adventurous, was a fully pink one rendered in suede. In the years following, Noah’s Top-Sider releases have included one in light brown suede with a debossed Jolly Roger, another with colorful patchwork leather, and an almost-punk, faux-croc pattern that was priced at $300 and sold out in all but a few sizes.

The brand has also worked with the Sperry CVO, a silhouette that could be accused of ripping off Vans if you didn’t know Paul Van Doren started his company after working for another boat shoe manufacturer, Randy’s. Canvas boat shoes like the CVO actually pre-date the leather Top-Sider, and Noah has modernized them with graphic hits that have included a repeating “SOS” and all-over print flowers.

Rowing Blazers began collaborating with Sperry that same year and has quickly stacked up numerous designs of the Top-Sider and CVO. Because Carlson is a vegetarian, he’s replaced the Top-Sider’s leather with materials like herringbone wool and gun club check tweed. But where the brand has really made its mark is by reintroducing the Cup Sailing Sneaker, a plush, low-cut shoe with a perforated white upper and restrained color blocking. Originally released in the late ‘80s, it’s a sneaker that many would be shocked to find out came from Sperry.

Carlson was excited to work with Sperry because it does have a history of more daring collaborations. The last time boat shoes had a moment outside of the typical prep confines, in the late 2000s and early 2010s, Sperry had a prolific series of collaborations with Band of Outsiders and counted the New York Citysneaker boutique Concepts as a partner. Elsewhere in the space, Sebago made several luxurious pairs with KITH’s Ronnie Fieg, whose sneaker collaborations are much better than his clothing.

“I like the ironic or tongue-in-cheek spin that those collaborations put on it,” Carlson says. “I thought it was cool for Sperry to be doing those things. I’m coming from an environment where it is very literal, but I always liked and jumped at the things that Sperry was doing 10 years ago that were a little more irreverent."

Daniel Penny, a freelance style reporter and writing instructor at The New School, says he got down with boat shoes around this time in no small part due to Vampire Weekend, the last great celebrity arbiters of prep. Before buying a pair of white Sperrys that he wore until they were more of a beige, he was a self-described skate rat.

“The whole preppy costume was totally foreign to me,” Penny says. “It was like this whole subculture that I was diving into. But it also felt rebellious because it was different than anything else I was seeing. I had never been to a country club or a yacht club. There were no lacrosse bros beating me up after school who wore boat shoes. It was a pure relationship.”

Prep is once again seeing a revival, perhaps as a course correction to the explosion in popularity of streetwear and sneakers. If the masses have zigged to hoodies and Travis Scott Jordans, a way to zag is through rugbies and boat shoes. Sneaker releases, in particular, have become exhausting to follow and demoralizing in attempting to purchase. With so many losing draws handed out by the Nike SNKRS app, a post-sneaker world may truly be upon us.

“The boat shoe was destined for a revival,” Penny says. “There are only so many classic, sort-of casual leather shoes that are not sneakers and are not dress shoes. You have to kind of accept that they have a meaning, and you’re either embracing or subverting that meaning.”

Even some of the luxury houses that have pivoted to sneakers have also contributed to the boat shoe comeback’s comeback in more fashionable circles. Last year, Prada introduced sleek pairs with rubberized logos to drool over. Louis Vuitton, upon introducing its own take in three colors last month, promptly sold out of them and has only restocked the all-black pair.

But if you’re going to partake in the trend, you may as well do turn to the originator in Sperry — the same way you should start with a pair of jeans from Levi’s or a fleece from Patagonia. And if you make it one of their shrewd collaborations, no one’s going to accost you like Cousin Greg. Or, worse, assume you’re in a fraternity.