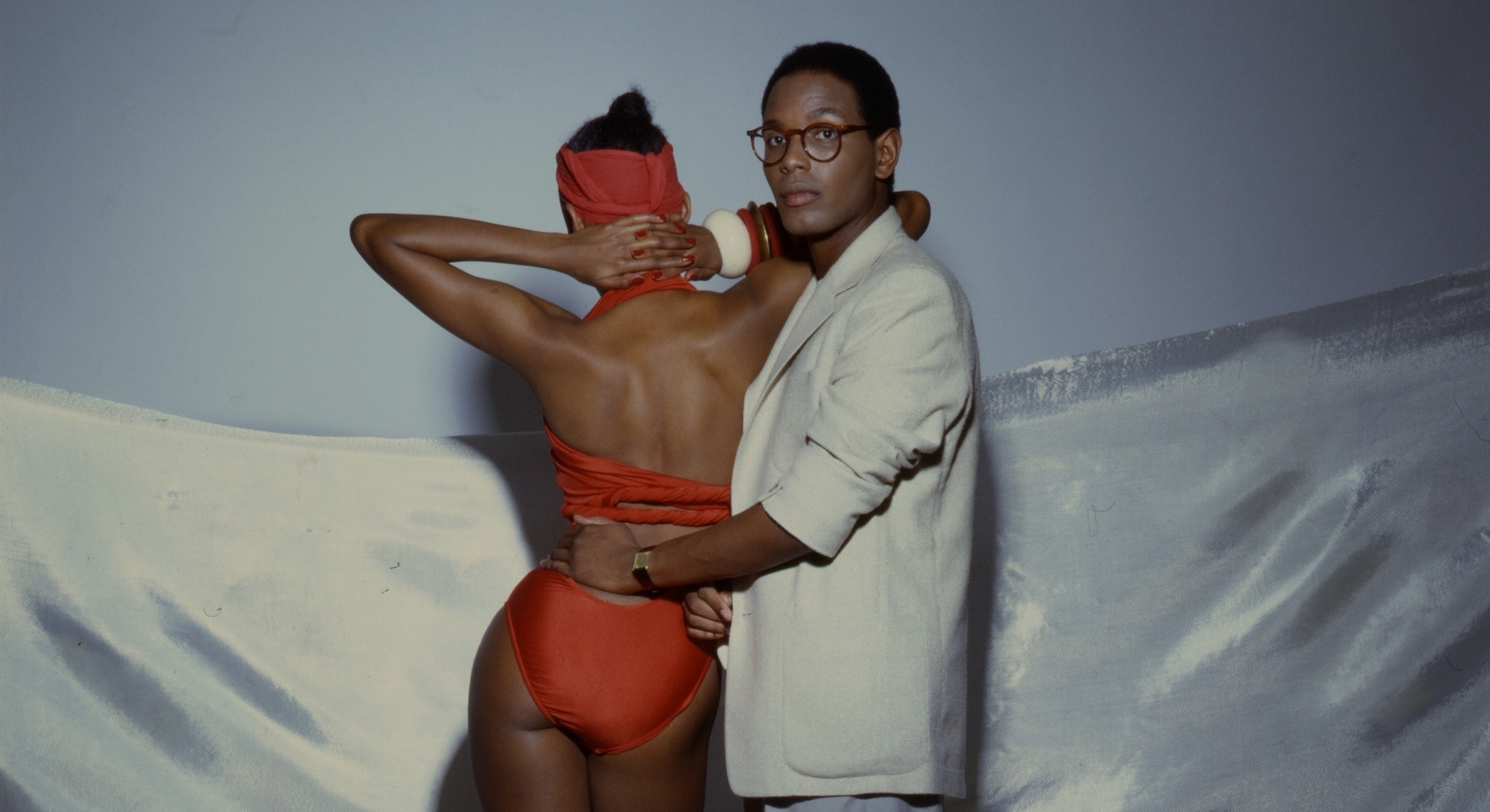 Growing up, James Flemons always mixed and matched his style. The Los Angeles native had five older sisters, and would often wear hand-me-downs and shop in the women’s section at Macy’s.

After winning best dressed in high school, he recalls a classmate expressing confusion at his eclectic way of dressing. “He said directly to my face, ‘You can’t dress like a skater one day, and then a preppy person the next day, and then like [a] ‘thug’,” Flemons remembers.

Today, Flemons is the designer of the semi-eponymous independent label Phlemuns, which has dressed celebrities from Lil Nas X to Bella Hadid, and famously created the outfits for Solange’s iconic “Don’t Touch My Hair” music video. Phlemuns designs have a relaxed silhouette and are made from recycled fabric, selling streetwear staples like hoodies, crop tops and sweat pants. A queer Black man, the clothing James Flemons produces is androgynous, and he cites Aaliyah and Andre 3000 as inspirations for “people who walk that line of [being] gender nonconforming” in their style.

While Flemons’ styles are inspired from the street, the brand isn’t the first that comes to mind when one thinks of streetwear. As streetwear proliferated into the mainstream, it also acquired connotations of hypermasculinity, in part due to its association with male-dominated skate culture, and the homophobia that appears in hip-hop. And yet, James Flemons, alongside Shayne Oliver, Pierre Davis, Stoney Michelli and Uzo Ejikeme, are prominent queer Black designers shaping contemporary streetwear, each continuing a long tradition of queer Black creatives’ definitive impact on the fashion style.

The first designer to link streetwear with the runway was Willi Smith, a Philadelphia-born gay Black man, whose label Williwear generated $25 million per year and sold off the racks at Macy’s and Bloomingdales in the late 1970s to 80s.

“He created the blueprint for a lot of designers today.”

Smith passed away from AIDS-related complications at the age of 39, but his legacy lives on in streetwear’s mainstream appeal in fashion today. An exhibition at Cooper Hewitt, Smithsonian Design Museum, which opened in March, sheds light on the almost forgotten designer. “He created the blueprint for a lot of designers today,” Darnell-Jamal Lisby, a fashion historian, said.

Raised in Philadelphia and belonging to a working class family, Smith’s grandmother, Gladys Bush, was a housekeeper who helped finance his education. Smith studied at Parsons on scholarship before being expelled for having an openly gay relationship, but still found success in the industry by designing for retailers like Talbots, and most significantly Digits, a sportswear company. He eventually founded Williwear, his own label, and collaborated with Laurie Mallet, his friend and business partner.

Smith’s success lay in connecting the clothes he designed to everyday people, rather than gatekeeping fashion as a high-priced luxury for the elite. He also put New York on the map in an industry dominated by Paris chic.

“New York fashion has always traditionally spoken to a more sportswear narrative, and [is about] reaching out to the masses,” Lisby said. “Willi Smith made street style, and people embracing the street style they already had, look cool. If you look at the clothes he was creating, it was all basics. For him it was about how you wore it, and leaving that to the consumer to decide how to wear it.”

Smith always returned to the streets for inspiration, be it in Mumbai or New York. His influences ranged from photographs of Black life in Harlem, Indian and Senegalese prints, drag balls, and his mother and grandmother’s style in Philadelphia.“He frequently discussed the influence of his mother and grandmother on his sense of style, especially their belief that you don’t need to be rich to look good,” Alexandra Cunningham-Cameron, curator of the exhibition, said.

And Smith is not the only designer belonging to the LGBTQ community who has defined the origins of streetwear and moulded its current-day relevance. In 2006, Shayne Oliver launched Hood By Air, which re-introduced streetwear to the fashion industry and paved the way for Virgil Abloh’s rise to fame as a luxury sportswear designer, and Kanye West’s Yeezy collection. Oliver’s clothes were gender nonconforming, and somewhat a product of GHE20GOTH1K, an invitation-only party led by Oliver’s childhood friend, DJ Venus X, a queer New Yorker of Dominican descent.

Ahead of his time, Oliver featured queer dancers who vogued, walked and posed at the finale of a fashion show in 2014, exposing a subculture that developed in Harlem, and is practiced primarily among queer and transgender Black and Latinx youth, to the crème de la crème of Manhattan fashion society. Seemingly at its height, the brand went on hiatus in 2017, and Oliver moved on to work for Helmut Lang. In 2019, Oliver announced a tentative relaunch of Hood By Air.

Supreme and Louis Vuittion remain the biggest giants in mainstream streetwear, in part thanks to Oliver’s efforts, but smaller, independent brands owned by queer Black fashion designers are reclaiming the fashion style. Take, for example, Stuzo, a company owned by lesbian couple Stoney Michelli and Uzo Ejikeme, which is based in Los Angeles and possesses a distinct New York flair.

Stuzo’s T-shirts are emblazoned with statements in bold-faced type like, “yup, still gay”, “boi/girl”, "black af”, and “gender free.” The brand also utilizes African prints like Kente cloth in its clothing, and even has joggers made of velvet or lace. Stuzo’s clothes are decidedly nonbinary, accommodating customers regardless of gender identification, and have attracted Jada Pinkett Smith, Spike Lee and Lena Waithe as loyal shoppers.

No Sesso, which means “no gender” in Italian, is a brand that also ignores the gender binary. Founded by Pierre Davis, a trans woman, No Sesso tends toward costume and conventional high fashion, but often has influences of streetwear. The brand’s spring 2020 collection had graphic tees, multicolored sneakers, and baggy pants, and Davis once remixed a Dickie’s work suit and basketball jerseys in the past for the effervescent, glamorous style that defines her collections. No Sesso’s latest collection was inspired by the Harlem renaissance, and while mostly affected by a period touch, possessed elements that can be called vintage streetwear.

With protests happening around the country for racial equality, and André Leon Talley criticizing Vogue’s Anna Wintour for being a “colonial dame”, Black people working in fashion are reminded again of the industry’s deeply-rooted problem with racism.

Willi Smith prioritized inclusivity and accessibility in fashion before these values were widely accepted as the norm, but often doesn’t get credit for his contributions because he wasn’t located in the center of the industry, choosing instead to advertise in “countercultural publications like PAPER magazine,” says Alexandra Cameron-Cunningham. Smith’s tragic death from AIDS-related complications at the height of his career not only snuffed out his genius prematurely, but likely led to it being forgotten.

“There’s a difference between white kids wearing hoodies and then Trayvon Martin wearing a hoodie.”

For Lisby and Flemons, the erasure of queer Black designers from most mainstream streetwear may owe to the lack of inclusivity in the fashion industry.

Flemons said that the mainstreaming of streetwear did not just erase its queer origins, but the style’s cultivation in low-income Black neighborhoods. “There’s a difference between white kids wearing hoodies and then Trayvon Martin wearing a hoodie,” Flemons said. “If it’s on a Black person, it’s criminalized. If it’s on a white person, it’s trending.”