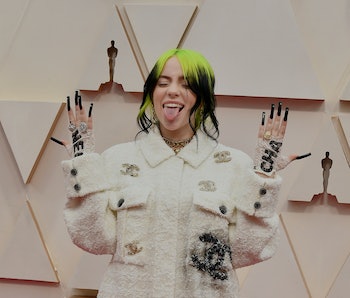 Fans of Billie Eilish are Happier Than Ever: A collaboration between the artist and Jordan Brand is brewing, new photos confirm. While a leak in June revealed a neon green Air Jordan 1 KO would be released, a more subtle Air Jordan 15 seems to be dropping alongside it.

Eilish has long shown her affinity to retro Jordans, often wearing Air Jordan 1s and praising Nike and Jordan Brand. Perhaps the music industry’s most loyal fan to the brands — save for hypebeasts Travis Scott and Drake — Eilish first teased rumors of a partnership when she appeared on an episode of Complex’s Sneaker Shopping in 2019. Per Highsnobiety, Jordan Brand VP of Footwear Gentry Humphrey has also commented on a potential collaboration in the past, saying: “You see us doing things with folks like Aleali May, you see us, gonna be doing some things with folks like Billie Eilish.”

Opposites attract — Now, two years after the rumors began, we’re getting a look at the two-shoe collaboration. The literal highlight of the capsule — a luminescent Air Jordan 1 KO — comes entirely dressed in Eilish’s favorite color, neon green. Nike’s Swoosh and Jordan Brand’s Jumpman decorate the sneaker alongside the artist’s stick-figure Blohsh logo on the tongue, while extra padding, a debossed Jordan Wings logo, and lines of stitching on the sides offer a quilted look.

The sneaker’s monochromatic color scheme looks comparable to Don C’s “Ghost Green” Jordan Legacy 312, which Eilish labels in the aforementioned Complex episode as one of her favorite pairs. She also mentions how she loves the Air Jordan 15s “more than any other shoe in the world,” saying in the clip that despite people hating on the model — and Tinker Hatfield pinpointing the sneaker as his worst Air Jordan design — it’s her favorite.

While the masses might not be on board with the AJ15, Eilish is clearly enamored enough to include the silhouette in her Jordan Brand collaboration. Her monochromatic design is simple and subtle, using a tan shade to show off the 15’s construction. A rubberized heel reading “23 - 6 - 15” nods to Michael Jordan’s jersey number, NBA championships, and 15th model, paying homage to the sneaker and its history. Eilish’s Bloshsh logo only appears at the front part of the collar, while insoles no longer read “Air Jordan,” but “Billie Eilish,” making it clear whose shoes you’re wearing.

Dropping soon? — An official release date for Eilish’s Air Jordan 1 KO and Air Jordan 15 has yet to be announced, but fans suspect the sneakers may drop around September 30, just prior to the release of Eilish’s Happier Than Ever: A Love Letter to Los Angeles documentary. A release would certainly help fans further understand the title of the film.