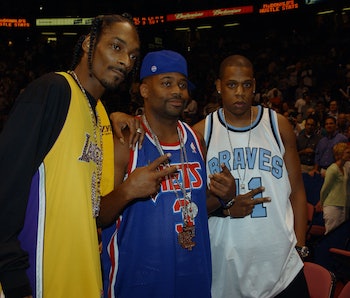 Last week, Fanatics and an ownership group led by Jay-Z announced that they had reached a deal to acquire Mitchell & Ness. What interested us most in the acquisition aren’t any of the business implications, but the narrative loop in Jay-Z’s involvement because of his love for throwback jerseys back in the his Blueprint days.

Hip-hop absolutely loved oversized jerseys during the era. The closer they hung toward the ground, the closer to drip nirvana. We can do without those proportions returning again, even as big pants are once again having a moment, but we wouldn’t be mad at a full-fledged throwback resurgence with more appropriate sizing.

Jay-Z is likely to do his part in bringing throwbacks back en-vogue to make good on his investment, and we’ve prepared for the resurgence, too, by picking out some of our favorite jerseys you can pick up right now. Besides older designs being much more thrilling, the benefit of these jerseys is that you don’t have to worry about your favorite player being traded and your top suddenly becoming a loaded novelty. [I say this in lamenting as someone in possession of a Carson Wentz Philadelphia Eagles jersey with ostrich leather numbers.]

The best result of the Chargers time in San Diego: powder blues.

LT was an absolute joy to watch during his prime, and even more so in the immaculate powder blue jerseys the Chargers sported at the time. The design is so iconic that Louis Vuitton paid homage this year to it with its own jerseys.

No one needs to tell you why owning a Michael Jordan jersey is cool, but we highly recommend picking up one of the “45” versions as a callback to his return to the NBA after his first retirement.

If you have to pick between an Bo Jackson football or baseball jersey, you've gotta go Raiders.

Raiders jerseys haven’t changed much over the years because you don’t need to mess with the menacing combination of black and silver. Of all those to wear it, none did it like Bo Jackson, who famously played professional basketball and baseball simultaneously.

NBA jerseys got weird in the '90s, but few as well than the Bucks' oversized mascot.

The Bucks’ late 90s jerseys deserve more love out of all the cartoonish designs from the era, especially because it’s what the league’s second-greatest 3-point shooter started his career in.

As much as it pains me to say it as an Eagles fan, the Cowboys’ star-shouldered jerseys from the ‘90s were absolute stunners. Just as flashy was Deion, the only player ever to appear in both a Super Bowl and World Series.

The player you pick up isn’t exactly important, but what is crucial is to get Phoenix’s contribution for the most delightful NBA All-Star uniform ever.

Another all-time classic from a team that hasn't changed its jerseys much.

Jerry Rice is quite possibly the best football player in his position as wide receiver, and what makes his Niners’ jersey even more amazing is the diamond patch from the NFL’s 75th anniversary.

Don't look for the end of the rainbow when the pattern itself is all you need.

Hip-hop couldn’t get enough of this throwback the first time around, and the Nuggets’ rainbow is no less enjoyable today than it was then.