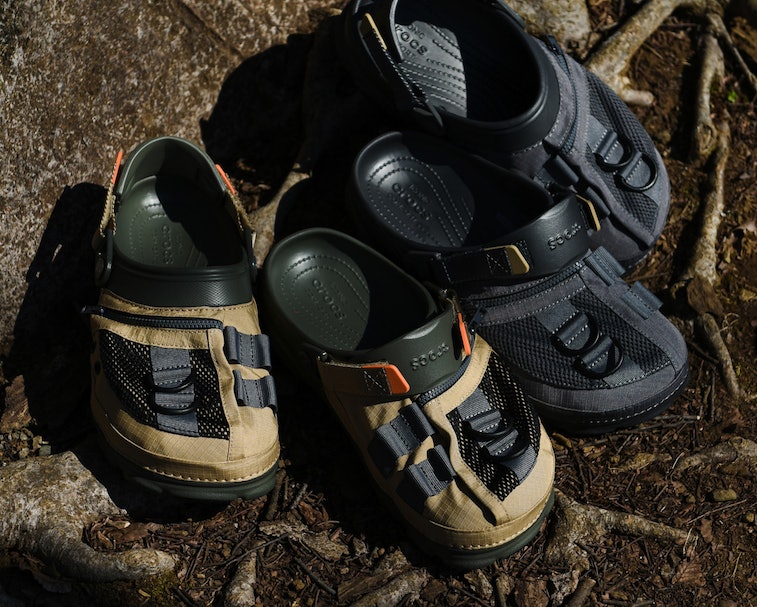 While Crocs have enjoyed a resurgence due to a healthy mix of irony and comfort, I have remained a healthy skeptic. No collaboration could sway me — not even when Beams added little fanny packs to the ankle straps. They're too ugly, I thought, I could never. Well, that has now changed as the Japanese brand tinkered with the shoes loved by chefs and nurses alike to make them look at home in the Rambo franchise.

Beams is dropping a quartet of tactical Crocs that are too badass to resist. Whether you're looking for storage or a Croc that can tackle rough terrain, this collaboration is more than a novelty. Dare I say it: these Crocs fuck?

A two-by-two capsule — Beams has made two different versions of the Crocs, each in two colors. One utilizes a fishing vest-like construction for the upper, complete with loops and D-rings for customization, as well as a zippered pocket. With today being 4/20, I'd be remiss if I didn't recommend it as a great place to store weed. But even if it's just a shoe you toss on for bodega runs, boom, toss your cash in there and call it good. It could handle more arduous conditions, however, with a more rugged outsole making it an all-terrain clog.

The other pair, which takes inspiration from military bags, looks even more rugged with a cobra buckle fastened onto the upper. The look is very Alyx, but somehow Matthew Williams has been beaten to the punch on a piece of footwear adorned with his brand's signature buckle. Together with the adjustable heel straps, which also feature on the fishing vest pair, the feature should make for a sturdy stride. I wouldn't be afraid of a little hiking wearing these.

The pre-order is already sold out — While only a "late April" release date has been announced, Beams has already sold out of its pre-orders. That should signal that the proper release will be just as hot, so keep your eyes out for further details. Beams' fanny pack Crocs were exclusive to the Japanese retailer, so don't expect to see these anywhere else either. That means you'll need to enlist a proxy, which will be worth the effort for a pair of Crocs you don't need irony to wear. At approximately $71.50, the proxy fees won't add too much more to the final cost.