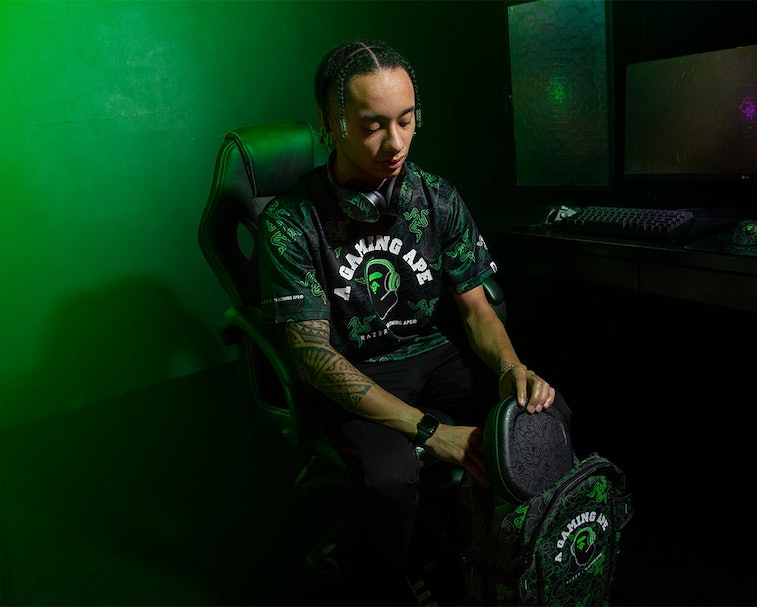 If I had to wager, I'd say the cross-section of people who still wear Bape and hardcore gamers is quite wide. That should mean a large and enthusiastic audience for the reveal of Razer's first streetwear collaboration.

Bape and Razer are putting neon green Cloud Camo all over a range of peripherals and wearables, including the Opus wireless headset, DeathAdder V2 mouse, and Goliathus V2 mouse pad. Appearing across all the goods is a Bape logo altered for the occasion, which sees the ape wearing a gaming headset.

Everything in the collection is more or less what you'd expect from such a collision — and if the inevitability of the design isn't off-putting, you'll be able to scoop up the Bape for gamers on December 4. Cue the name the collection is running with, "A Gaming Ape." (Yes, really.)

Head, shoulders, and more — Bridging the gap between the peripherals and wearables is Razer's Rogue backpack, which comes with a dedicated slot for laptops, a wrinkle-proof exterior, and waterproof zipper tape to protect your electronics. Ostensibly, it could be worn by anyone — but I can't see it being worn by anyone who doesn't log dozens of hours per week gaming.

The same could be said for the apparel, which includes an all-over camo print T-shirt and hoodie that look like what a professional e-Sports player would wear. Black and white T-shirts are more Bape's bread and butter, putting the in-the-zone logo front and center.

Some technical specs — The Opus headset is THX-certified with active noise cancelling and a "Quick Attention" mode to allow the outside world back in. Meanwhile the DeathAdder V2 mouse packs high-speed transmission with a 20,000 DPI optical sensor that's 99.6 percent accurate. Finally, the Goliathus V2 mouse pad has a Textured Micro-Weave surface to bolster a mouse's accuracy, responsiveness, and ease of motion.