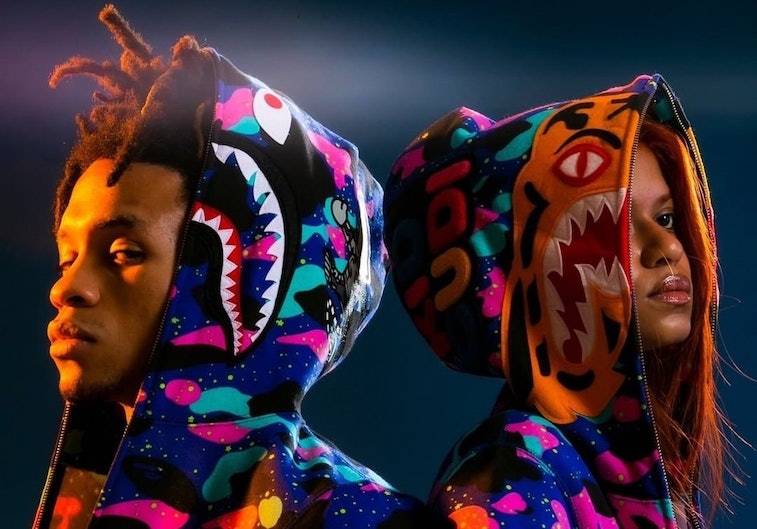 It’s been many moons since young Kid Cudi was working in a New York city BAPE store. Now, instead of working for the brand, the artist announced he would be working with BAPE to create a collaborative apparel collection. Boasting 20 new items, the capsule is the largest collection the BAPE brand has ever worked on with an artist. But given the longstanding history between BAPE and Cudi, it's a well-deserved accomplishment for the musician.

Cudi’s apparel collection comes just after a recent footwear partnership with Adidas, where the artist got to work making his very own silhouette. Named after his daughter Vada, the "Vadawam 326" sneaker takes visual cues from the Artillery Hi as well as inspiration from sci-fi movies and NASA, resulting in a '90s basketball shoe with chunky and futuristic features. Paired with his new BAPE line, Cudi will be able to rock an entire outfit designed by himself — if only his younger self could see him now.

Star quality — Fans can look forward to a collection filled with Cudi references, as well as seeing Kid Cudi in BAPE’s Baby Milo form. The brand’s signature full-zip hoodies appear in shark and tiger motifs, both boasting BAPE and Cudi branding and an Entergalactic-themed camo print. Keeping it comfy, matching pink, green, and purple sweatpants can be paired with the hoodies.

Expanding on the collection’s galactic theme, graphic tees, hoodies, and hats all feature a graphic of Kid Cudi as an astronaut. Almost like playing Where’s Waldo, the artist can be seen floating through most of the BAPE capsule offerings. His face, complete with glowing red eyes, appears on a black hoodie, another graphic tee, and the collection’s staple pieces.

A retro wool and leather varsity jacket bears a chenille patch of Cudi’s face on the back, as well as multicolored lettering that reads “Moon Man” down the right sleeve. BAPE’s Baby Milo is embroidered onto the front of the jacket, fully decked out in space gear.

Both characters also grace the range’s most surprising addition, a colorful BAPE-branded G-Shock watch. Teased last year on Instagram by Cudi, the accessory boasts a bright pink and red strap, with a matching pink face. The watch seems to match the chaotic energy of the rest of the capsule, allowing it to stand out in its sea of colors and patterns.

To infinity and beyond — Although Cudi doesn’t work at BAPE anymore, his collaborative collection will make his presence known throughout all physical store locations, starting February 20. The full capsule will also launch online for those unable to shop at BAPE’s coastal locations. No matter how you plan on copping a piece of this collection, however, know you’ll be over the moon if you score.