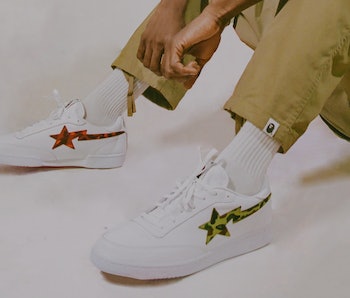 The Bapesta is probably the most well-known and well-liked bootleg sneaker of all-time. First introduced in 2002, Bape's flagship sneaker is a near one-to-one copy on the Air Force 1. The most prominent deviation is a light star instead of the Swoosh, with minor changes including the words "Ape" or "Bape" replacing "Air" on the midsole.

Nike has never filed suit, although the recently settled Warren Lotas case would seem to indicate the sportswear giant could have won if it had ever done so. Free of litigation, the Bapesta has become an icon in its own right — and now Bape is bringing its cues to Reebok.

Their collaborative Club C, slated for a super limited release, applies the flair of the Bapesta to Reebok's restrained silhouette. The usually simple leather sneaker is hit with Bape's lightning star, rendered in four different colors of camo across the lateral and medial sides of each sneaker. Red, blue, and purple Color Camo — as well as 1st Camo in Green — are something of a greatest hits compilation from the Bapesta's nearly 20-year-old history. Why release four different shoes when you can combine them all in one?

Bape's first Reebok collab — This is the first time Bape has worked with Reebok, although the Japanese brand has a long-running partnership with its parent company (for now) Adidas. What's most interesting about this collaboration is Bape's decision to carry over the Bapesta name, despite the shoe's obvious ties to Nike.

"Bapesta" appears on the Club C's mustache, and a mashup of the two brands' logos sits on the tongue. Apart from these details, and more camo on the insole, it's a Club C as we know it. Judging by how other brands typically use collaborations to launch new silhouettes or re-establish old hits, we may be in for a lot of Club C releases in 2021.

Just 200 pairs — To kick off its alliance, Bape and Reebok will release just 200 pairs of this multi-colored Club C through Bape's Miami store. Those who can make it to the shop will be able to pick it up this Saturday, December 19, for $150. Co-branded T-shirts, which have yet to be revealed, will also be available — and everyone who cops the shoes will also receive a limited-edition tote bag.

Wider releases should be in store next year, when a second iteration of the Bape Club C will be revealed, as well as another model. I'm not sure that Bape is the answer to Reebok's established woes, but so far their creative link-up is nothing to scoff at.