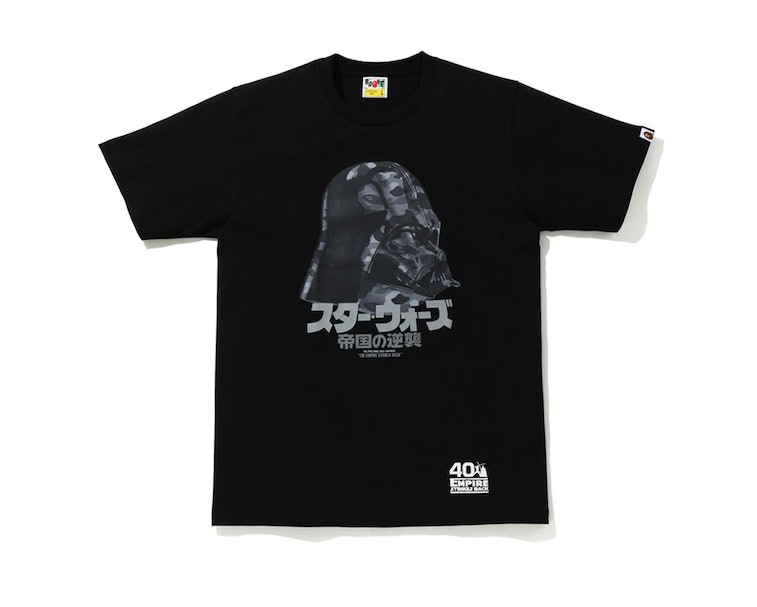 The Empire Strikes Back, the last Star Wars movie many fans/trolls think justifies the series' existence, had its 40th anniversary back in May. Late to the celebration is Bape, which has announced a collaborative capsule to release at the beginning of August. And while most of it does little to distance itself from past Star Wars x Bape collabs, the Darth Vader tee is worth giving up some of your Galactic Credit Standard.

The T-shirt, which will drop in black and white, features a profile of Darth Vader's mask adorned with Bape's iconic Cloud Camo. Rendered in grey scale, the camo isn't as obnoxious as the brand's oversaturation and and less stylish adherents have made it appear. It also features the title's translation in Japanese, adding instant cool points we've known ever since we could get our hands on Japanese Pokémon cards.

What else they got? — The rest of the T-shirt range features a band of characters done up in Bape's cartoonish style — but the problem is we've seen many of them before. R2-D2, C-3PO, Chewbacca, Boba Fett, and Stormtroopers have all appeared on Bape shirts already. And where oh where is the mighty Luke Skywalker? He's nowhere to be seen in this celebration of the film that concluded his original arc.

More original is a pair of tees with the original Japanese poster for The Empire Strikes Back set into Bape's Sta logo. It's a little hard to make out, but well worth it when the image clicks.

Finally, and unfortunately, there are streetwear dolls. Two sizes of Medicom Toy Bearbricks channel Boba Fett with an onslaught of Cloud Camo. A VCD figure depicts Boba Fett more true to form but with no dearth of camo either. The removable helmet reveals Baby Milo underneath, which is cute but hardly enough so to justify it as a collectable. There's a galaxy full of better decorations out there, my friends.

Dropping this weekend — The full capsule drops this Saturday, August 1, through Bape's webstore and select brick-and-mortar stores. You can also scoop it through ZozoTown by utilizing a proxy and find the toys alone through Medicom Toy's physical and digital outlets. Just, you know, let the Force be with you.