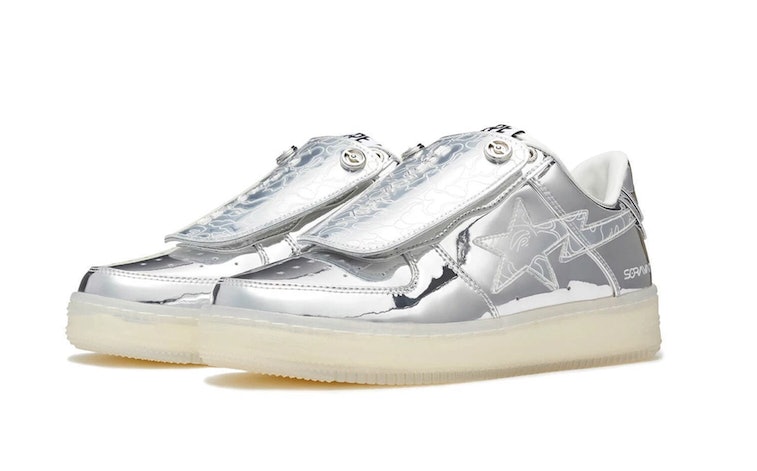 BAPE has recently leaned on collaborators to bring in a profit, and the brand has finally found a partner that makes sense. Hajime Sorayama, the Japanese artist known for his feminine robot figurines, has teamed up with BAPE to create apparel, a BAPE STA sneaker, and BE@RBRICKs — more on the latter later.

Sorayama, like BAPE, has collaborated with brands more in the past two years than he has in the last decade. His metallic artwork has graced Dior, Stella McCartney, and Daniel Arsham designs — all while Sorayama has worked alongside Poggy, Medicom Toy, and Nanzuka’s 2G Parco store to dish out exclusive pieces, some of which join the artist’s BAPE partnership.

All that glitters is Sorayama — Through 2G and Medicom Toy, BE@RBRICK figurines have been produced in three sizes — 100 percent, 400 percent, and 1000 percent — offered in either shiny gold or silver. Incorporating BAPE’s influence, the figurines feature shark faces, BAPE branding, and the brand’s signature camouflage, which outlines the models in a way that recalls Sorayama’s robotic women.

As for the actual wearable portion of the collaboration, BAPE has prepared the expected co-branded T-shirts, each of which bears “A BATHING APE” and “HAJIME SORAYAMA” in huge text. More tees see recognizable shark faces atop monochrome backgrounds, while the same graphic appears on a gray coaches jacket. And to match the BE@RBRICK figurines — or perhaps carry them — a tote bag comes with a glossy silver finish.

The highlight of the collection may literally be Sorayama’s metallic BAPE STA sneaker. With an entire upper coated in reflective silver, the shoe looks like a mirror. Translucent soles and BAPE logos help add to the effect as BAPE’s signature camo details a lace cover with futuristic silver buttons.

Go for the gold (and silver) — BAPE and Hajime Sorayama’s full collection drops July 31 at BAPE stores and at the streetwear brand’s website. Additional BE@RBRICKs will be available at 2G Tokyo and 2G Osaka stores for collectors — although the metallic BAPE STA sneaker should really be considered the heirloom of this capsule. Its chrome finish may be silver, but the collaborative shoe is gold in our books.