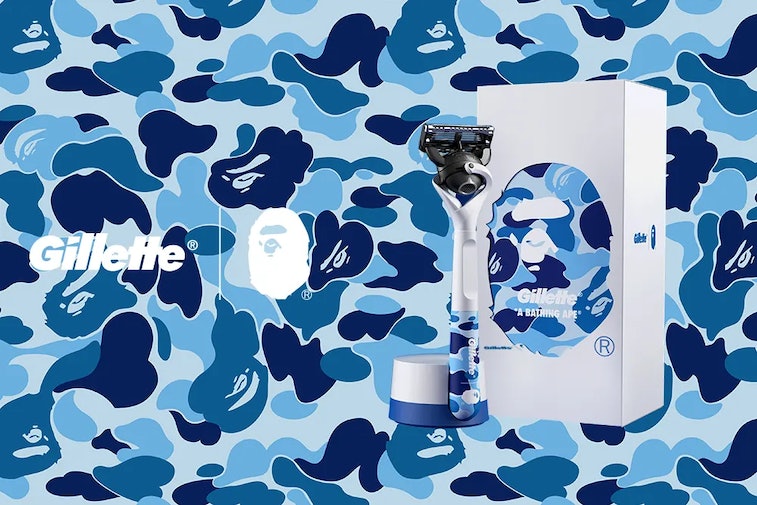 No fit is complete without a fresh shave, at least according to BAPE. The streetwear brand has linked up with Gillette to create a co-branded razor featuring the former’s signature camo print — but how that product aligns with BAPE’s heritage, or even streetwear in general, is unclear.

Eleven years after its founder Nigo sold 90 percent of his stake and left the brand, BAPE has gone from teaming up with Supreme and Kanye West to partnering with Havaianas, Amazon, Angry Birds, and Minions, with each collaboration more nonsensical than the last. In the past few years especially, the brand has moved away from its exclusive image, seemingly slapping its camo print on any product that comes near it. But if BAPE will work with anyone, why should consumers care?

Cut down the collabs — Unless you’re a huge fan of monkeys, most of the appeal for BAPE products came from its exclusivity and influence, which its Gillette collaboration challenges. There’s no justification for the partnership other than profit, and who the hell wants a limited-edition razor anyway?

BAPE seems to be mimicking Supreme — another streetwear label famous for slapping its Box Logo on anything from Box Logo-branded trailers to mac & cheese — but all it’s doing is watering down its once-prestigious image with products that are less original and less desirable, something that Supreme itself is teetering on. Streetwear has never really been about logos anyway; it’s always been an “if you know, you know” energy. And now we know BAPE is milking its reputation for all it’s worth.

Shaving off credibility — The streetwear brand’s Gillette collaboration includes a razor, magnetic razor stand, and travel case, all of which feature BAPE’s signature blue camo print. Each piece also comes with dual branding, including BAPE’s Ape Head motif, while coordinating packaging continues the logo-heavy theme. At least the included razor comes with a replaceable blade, meaning hypebeasts can continue to shave with it long after BAPE’s legacy has faded away.

Besides when the grooming set launches, there’s little information on Gillette’s website explaining why the partnership exists — and there’s little reason to buy into “the ultimate collab in fashion and grooming” unless you need a new razor. If that’s you, look out for the BAPE x Gillette grooming collection on February 23 at the shaving company’s website. The rest of us will be shaking our heads.