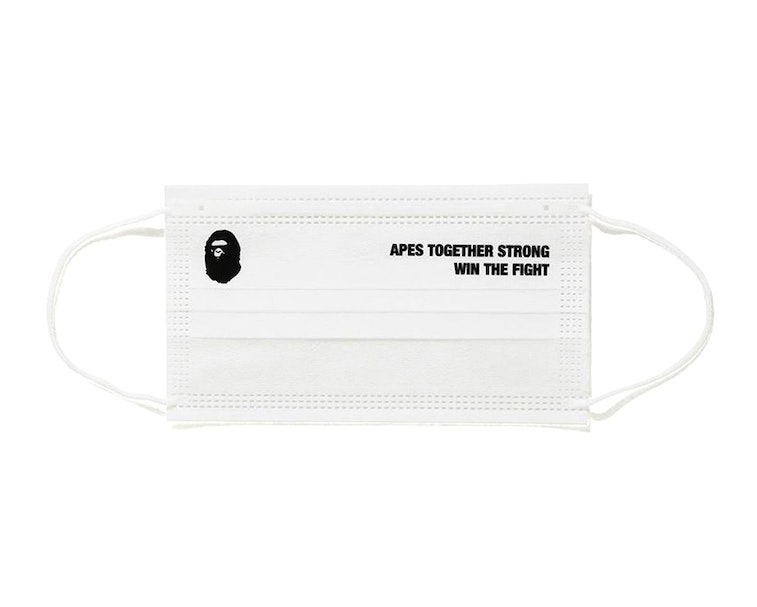 Face masks are nothing new for Bape. The market was already there because Japan long ago bought into masks as a common good to prevent the spread of illnesses less deadly than COVID-19.

What is new is a Bape mask explicitly made for COVID-19 — and it's surprisingly tasteful. Instead of camo or the shark motif, the Japanese streetwear brand opted for simple white cloth with an encouraging message. "Apes together strong/Win the fight" is printed alongside the Ape logo, and that's it. The mask is uncharacteristically subdued for Bape, and wearing it won't have the unfortunate effect of making you look like an insufferable hypebeast.

It comes with a case, too — To help keep your mask clean when it's not on your face, Bape has included a translucent case with its signature camouflage rendered in white. Once again, it's shockingly subtle — something you can't usually say about Cloud Camo.

My eyes widen every time I see someone set their mask down on a table, so this dedicated case may be the solution long after the Bape mask is done for. And that could be sooner than later, as the mask doesn't appear to be washable. It looks just like the no-frills disposable joints you see around, so you're better off rationalizing the purchase as a case with one (1) disposable mask included.

Try your luck in stores — The mask set, which retails for $34, has already sold out through Bape's webstore and is reselling on StockX for around $60. But before you go shelling out for a 100 percent markup, check out your local Bape shop, where they've also been stocked.

If that too is fruitless, settle for Bape's free COVID-19 coloring book as a salve for boredom.