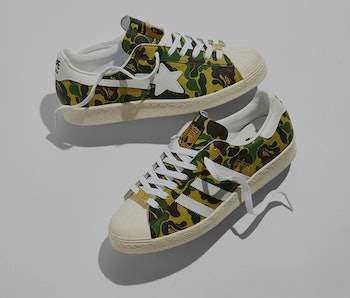 BAPE and Adidas have been collaborating on the Superstar since 2011, with the latest renditions popping up last February. Two designs — including a basic black and white pair and a mismatched red and blue camouflage pair — honored both the BAPE Star and Adidas’ Three Stripes, and now, the brands have debuted a third design to add to the collection. BAPE took to Instagram to announce a “Green Camo” Superstar would soon launch as part of its Spring/Summer ‘21 collection.

Although the two streetwear companies have a longstanding relationship, their last collaboration marked the first time BAPE's "Sta" logo appear on Adidas’ iconic silhouette. Given the Superstar is 50 years old — and is to Adidas what the Air Force 1 is to Nike — the new look is a bit jarring, but welcomed. The “Sta” logo adds some much-needed hype to the silhouette Adidas has been trying to push out almost as much as its Stan Smith sneaker.

Soon to be worn by John Cena — Like past collaborations, the duo’s latest pair dons an upper made up of BAPE’s signature military-inspired ABC print, this time dressed in classic green hues. The leather upper is only offset by BAPE’s Star logo and the Adidas Three Stripes branding on the sides in white.

Staying true to the Superstar silhouette, shell-toes and sole units take on an off-white hue. Branding up top reminds us of the collaboration, however, as gold “A BATHING APE” branding sits on the right shoe’s tongue to complement the left shoe’s gold Adidas branding.

Heel tabs follow suit, with the right shoe reading BAPE alongside a star, and the left shoe labeled with Adidas’ trefoil motif. Gold lace dubraes add another touch of luxury to the Superstar, keeping the sneaker’s white laces in place.

A costly collaboration — Even the shoes’ boxes have been given a makeover, sporting the same green ABC camouflage print and Three Stripes co-branding. While an Adidas release date hasn’t been confirmed by the brand, the sneakers are set to land on the BAPE website on May 1, with retailers across the globe carrying BAPE’s Superstar on May 7.

No price has been announced either, but given the last two pairs retailed at $360, consumers should expect a similar price. While Superstars usually retail around $85, BAPE’s Bapesta sneakers sell for $279 — and cost even more once put on the resale market. Considering the same value might apply to BAPE and Adidas’ collaborative Superstar, it’s worth copping at retail price instead of hoping for an after-market deal. After all, the classic “Green Camo” pair will most likely be the most coveted sneaker out of the Superstar collection.