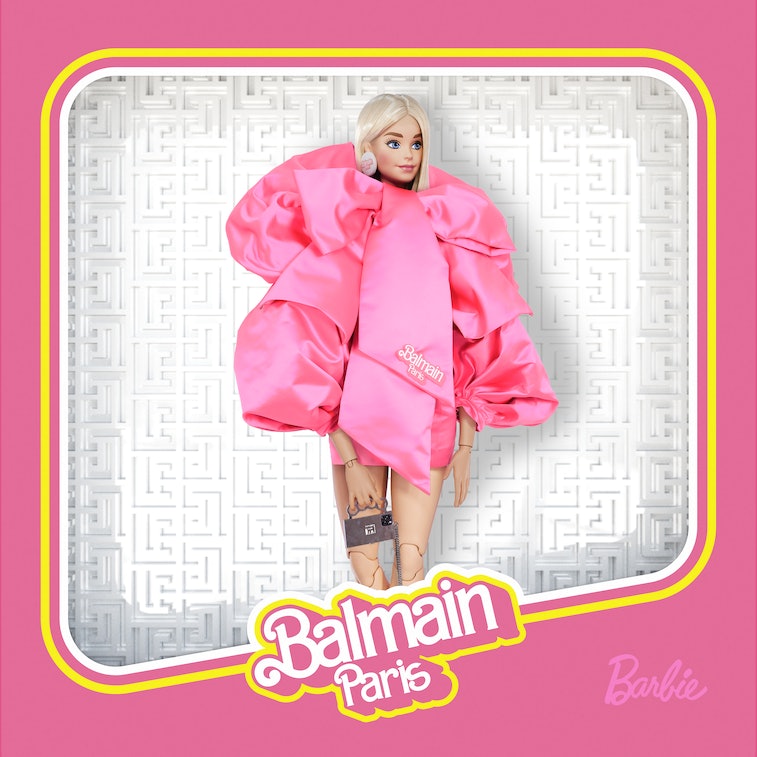 Barbie has moved on from her own world to the blockchain one. In collaboration with Balmain, the doll is entering the luxury space once again with a luxury ready-to-wear collection — pink, of course — alongside an NFT auction that will feature three unique Barbie avatars sporting digital versions of the looks.

Even prior to Balmain, the toy company has collaborated with Jean-Paul Gaultier, Michael Kors, Donatella Versace, Diane von Furstenberg, Karl Lagerfeld, and most notably, Jeremy Scott. The Moschino creative director has dedicated multiple projects to Barbie; sending human versions of the doll down the runway for SS15; personally awarding Barbie the 2021 Fashion Icon award at Arab Fashion Week; and even being immortalized himself as a Ken doll. If Barbie’s team-up with Balmain has proved anything, it’s that she’s only loyal to Ken, not fashion houses.

(More than a) Material girl — After all, Barbie has remained one of the biggest fashion influences since her debut in 1959, although the doll has equally represented antiquated female stereotypes. Yet according to Rousteing, the new 70-piece collection is dedicated to female empowerment, diversity and inclusivity; all of which are traits he aligns with Barbie. “For me, it’s a lot more than just a commercial project. It’s very emotional,” Rousteing told The New York Times, reflecting on the shame he felt playing with Barbie dolls as a child.

The toys aren’t exclusively meant for any gender, Rousteing continued, and accordingly, the majority of the Balmain collection is genderless. “Having Barbie in my Balmain army, making a collection inspired by her where there are no boy clothes or girl clothes, is my small revenge. I think Barbie represents a joyful dream world. There’s nothing wrong with a dream. But let’s push the dream, and not the dream of the 1950s or 1960s, but 2022.”

Fusing the ideas of today with the styles of yesterday — all doused in shades of pink — the collection features graphic tees, silk satin suits, dollhouse-shaped bags, sequin mini dresses, and doll-like pajama sets. Rousteing even took inspiration from his own previous designs, reimagining his AW12 Fabergé dresses in magenta Swarovski crystals.

An IRL look at the collection.

Digital Dollhouse — In addition to the ready-to-wear collection, Barbie and Balmain’s collaboration includes three one-of-a-kind NFTs of distinctive Barbie and Ken avatars, each of which will be auctioned online. The highest bidder will not only receive the digital doll, but a real-life version of its outfit, albeit doll-sized.

As the auction signifies Barbie’s first steps into the world of blockchain, the NFTs will be available exclusively through Mattel Creations, an e-commerce platform launched by Mattel in 2020. The space for digital art creates “an intersection between the [Mattel] brand, art and collectability,” according to a press release, and will have its Balmain NFT auction hosted by cyber industry expert MintNFT. Bidding begins on January 11 at 12 p.m. ET, while the full ready-to-wear collection will launch globally at the luxury brand’s website, Balmain stores, Mattel Creations, and brand partners like Neiman Marcus on January 13. Ready to party like Barbie?