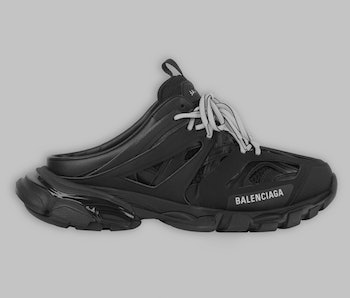 The great mule renaissance has come to Balenciaga’s “Track Sneaker.”

Designer Demna Gvasalia chopped the back off of his over-the-top sneaker, giving it new life as summer casual footwear. The exposed heel is the Track Mule’s only deviation from its predecessor, which makes it easy to slide on and off as a house shoe or for quick jaunts outside. What remains is the same chunky heel, the same weaving upper, and the same double laces that have made it a standout ~fashion~ sneaker.

The days of the Triple S may be long behind us, but the Track Sneaker and its offshoots live on as Balenciaga’s foremost meme-worthy footwear. Wearing the Track Mule will all but require acknowledging its inherent absurdity, essentially saying, Yes I dare.

The Track Sneaker keeps on giving — Since first introducing the Track Sneaker in 2018, Gvasalia has continued to find more applications for the massive running shoe. It’s been carved out as a proper strapped sandal and built up into a $1,000 hiking sneaker. Even though Gvasalia’s Balenciaga has specialized in preposterous footwear, it’s still impressive to see just how much the Track Sneaker can be remixed.

The Track Mule is particularly funny for its modest alterations, as the laces become entirely superfluous for a slip-on shoe. And with a propulsive sole underneath, the mule can be seen as a more fashionable version of Hoka One One’s ultra-supportive Recovery Slide.

An expensive joke — Balenciaga’s Track Mule is available for pre-order now in black, white, and beige. Securing a pair will set you back $895, and delivery is expected to begin no later than April 12.

Dropping nearly $900 on mules is a nontrivial investment, but if you’ve got it like that it’s a great way to embrace the rise of exposed ankles and wink-and-nod footwear. We’re all about the comfort and ease of wear for the like of sandals and mules, whether you rock ‘em exclusively at home or as a stylish alternative to your sneaker rotation. The broader your shoe game is, the better.