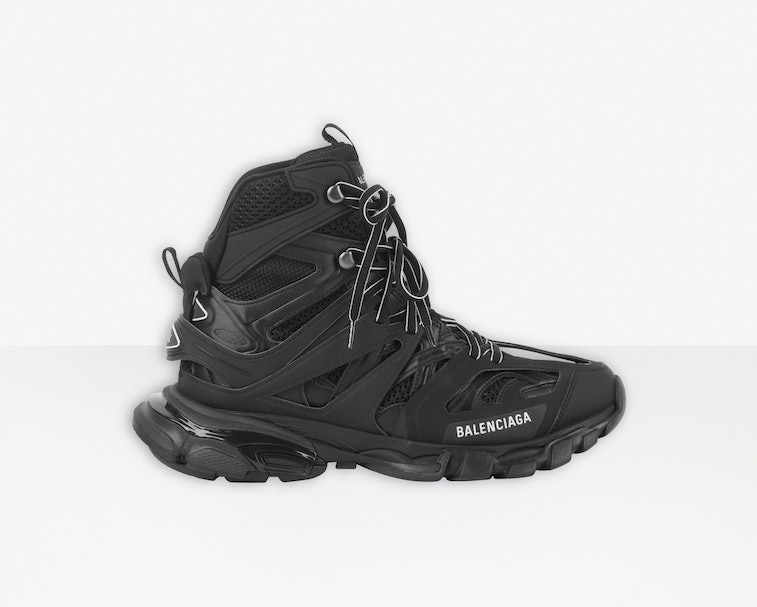 Demna Gvasalia has done it again. The Balenciaga designer has previously transformed his Track sneaker, the successor to the behemoth Triple S, into a slide and a more fastened sandal. Now he's given it yet another life in the über trendy land of hiking.

The chunky-soled sneaker has been hiked up into a hybrid sneaker-boot, and naturally it's called the "Track Hike." Its signature wavy, textured upper now climbs well up the ankle to claim even more real estate than the wieldy originator. D-lock lacing help make the Track Hike a bonafide boot — but it's largely the same sneaker as you know it, only taller.

Ugly good — Gvasalia is a specialist in bizarre footwear that's nonetheless entrancing. His sneakers have an almost meme-like appeal, with customers in on the joke saying, Yes, aren't these hilarious?

No sneaker was more polarizing, and more emblematic of Gvasalia's talent, in the last decade than the aforementioned Triple S. With three soles stacked on top of each other, the $1,000 sneaker was comically unwieldy and equally ubiquitous in its run as the most coveted luxury sneaker around.

Fashionable sneaker acolytes eventually moved on from the Triple S, and the Track has partially filled the void since as a more modest hit. During that time, Balenciaga has also released Vibram Five Fingers with articulated heels, soccer cleats for everyday wear, and a hybrid motocross-cowboy boot. Medieval armored boots are also on the way this year — appealing to a continued appetite for head-turning footwear.

They're already flying — Balenciaga opened up pre-orders for all-black and all-white versions of its new Track Hike, and the entire run is already sold out. But if you're ready to shell out $1,050 for these boots that'll likely never see a trail, a wider run at luxury retailers is imminent.

More colors should be on the way as well, and we're looking forward to the Track Hike being even more unmissable in, like, hot pink or a deep red.