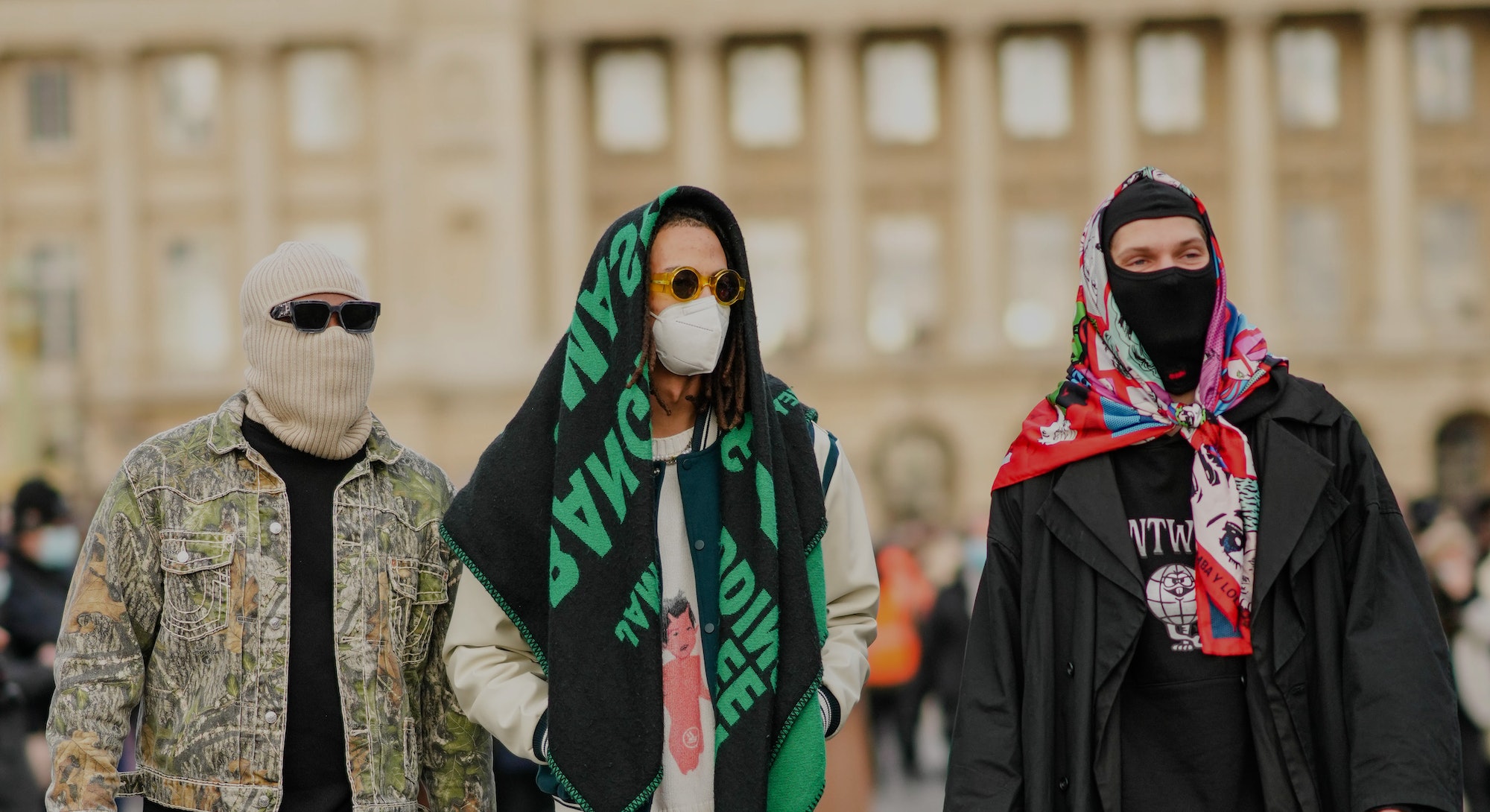 Balaclavas have suddenly become fashion’s hottest accessory. But as the thick, knitted headpieces rise in popularity, there’s a clear double standard about who can and can’t wear them without fear of being stigmatized for their religious beliefs or cultural background.

Everyone from Kim Kardashian to Kanye West has been seen wearing balaclavas of all shapes, designs, and colors. Meanwhile, as the accessories are made fashionable by celebrities, Muslim women and people of color have faced persecution for head coverings long before these crocheted daisy balaclavas started to pop up all over people’s Instagram feeds.

Celebrities have always been put on a pedestal for their sense of style, but there’s a blatant double standard that exists between who can and can’t cover their head in public. Muslim women can get fired for wearing hijabs to work, and Black people routinely get stopped and searched by police for wearing hoods. All the while celebrities and social media influencers are viewed as trendsetters by media outlets and fans, creating a cultural discrepancy that stems from the basis of racism and misogyny.

Traditional hijabs, which are essentially flat scarves tied strategically around the head, are usually worn for religious reasons, but aren’t exclusive to Muslims the way one might assume — women in all three Abrahamic religions (Jewish, Christian, and Islamic) have worn them since the 13th century BC. Balaclavas were originally invented for Crimean War soldiers and aren’t synonymous with hijabs or other forms of religious head coverings, but that doesn’t mean their similar implications can be ignored.

“You are liberated with your balaclava because it makes you feel beautiful and I feel the exact same way when I wear my hijab.”

More recently, balaclavas have been pushed by celebrity endorsements and a huge social media presence. After Kim Kardashian showed up to the 2021 Met Gala in head-to-toe Balenciaga, Lyst reported a 62 percent increase in online searches for face coverings within the following 48 hours. Beyonce has offered multiple balaclavas in her Adidas “Ivy Park” collections and Alexa Demie wore a black headscarf as she prepared for the Euphoria Season 2 premiere. Kanye West even wore a face-covering during Paris Fashion Week, despite a 2011 countrywide ban that prohibits full-face coverings in public.

TikTok is full of tutorials on how to turn scarves into balaclavas, and there are hundreds of these product listings on Instagram and Etsy. However, glossing over the racial and religious implications of head coverings by adding knitted bunny ears or a Balenciaga tag is just bad taste to those who have dealt with harmful biases for wearing a hijab or hoodie.

For Hajar Mohammad, a skincare writer who uses her platform to educate others about her faith and hijab, society’s fascination with balaclavas is ironic. Muslim women are often unwarrantedly lectured about how the hijab is a tool of oppression, yet balaclavas are deemed trendy and fashionable, she says. “The majority of people do not know why a woman wears a hijab,” Mohammad told Input in an interview. “You are liberated with your balaclava because it makes you feel beautiful and I feel the exact same way when I wear my hijab.”

Balaclavas are just one aspect of modest fashion, the trend of wearing less skin-revealing clothes for spiritual or personal reasons, that’s helping reshape beauty standards — that industry alone is expected to amount to $311 billion by 2024. The popularity of unrevealing clothing is everywhere once you look past the haze of Fashion Nova cutout dresses and incorporating lingerie into a daytime outfit. Billie Eilish continuously made headlines for wearing baggy clothes that prevented her body from being sexualized, and streetwear (the world’s favorite style right now) is built on oversized pieces.

There’s a newfound appreciation for modest fashion, balaclava included, that doesn’t stem from church or business casual wear. However, the trend couldn't reemerge with the high societal popularity it has now until it became less attached to religion.

“You can put your balaclava on and take it off as you please all while being told how gorgeous and ‘high fashion’ you look, but hijabi women do not have that privilege.”

Isra Saker, a London-based photographer who dresses modestly for religious reasons, attributes the rise of the balaclava to a worldwide realization that you can look good purely with what you wear, not with what you reveal. She told Input that there’s a wide misconception that Muslim women are forced to wear a hijab, when in reality, wearing a head covering is a personal choice for religion and fashion alike.

The entire balaclava trend could have been an opportunity for the world to be more accepting of hijabis and modest dressers. Unfortunately for people like Mohammad, Saker, and millions of others who share a cultural and religious background with them, it seems that white folks and celebrities are safe from the stigma and discrimination that’s long been attached to certain groups who wear head coverings — be it a balaclava or a hoodie.

On TikTok, Maliha Fairooz criticized the deeper innuendos of the balaclava when she said, “If you're a black, young man, it's called a hood and you can get murdered by the cops; If you're a Muslim woman, you will get hate-crimed; If you’re a skinny Caucasian woman, you get to go down as a fashion icon.”

Islamophobia and racial prejudice are huge drivers in dictating how, why, and which people can cover their bodies or heads in public. Women in Quebec aren’t allowed to wear the hijab in workspaces for concern of looking too intimidating. French girls under 18 are banned from wearing hijab, burqa, or niqab, and hijabi mothers aren’t allowed to participate in school field trips.

In France, hijabi women weren’t allowed to play soccer until 2014, yet just last month the French Senate banned hijab in all sports competitions to “uphold religious neutrality.” But religious imagery isn’t questioned during soccer when (usually male) players make the symbol of the cross, have religious tattoos, wear balaclavas to keep warm, or point to the heavens after a goal.

Ironically, France, one of the fashion capitals of the world, glorifies headscarves. Vogue France’s Instagram posted a balaclava-clad Julia Fox and Kanye West in Paris, saying “yes to the headscarf,” despite countrywide hijab bans. Many French fashion houses, like Chanel, Louis Vuitton, and Maison Margiela produce balaclavas upwards of $500 and put them on non-Muslim people, but don’t like to see the people they're taking inspiration from wearing their designs, said Mohammad.

Gucci’s blackface balaclava jumper in 2018 and Nike’s “menacing, gang-related” balaclava of the same year also reinforced the presence of racism in fashion. Balenciaga was accused of “gentrifying sagging” in 2021 with a pair of $1,200 sweatpants that had a visible boxer waistband, further exemplifying this tone-deaf wave from luxury brands.

In 2019, 23-year-old Elijah McClain was violently killed after police responded to a call saying he looked “sketchy” in a ski mask. Racial profiling exists on a global level, yet brands can’t stop taking these criminalized trends and calling it fashion.

Hijabs are stigmatized as medieval punishments and hoodies are suspicious to police, while the balaclava is an homage to Hollywood and European glamour. The double standard is obvious and present, but the problem isn’t just with the brands and celebrities pushing their popularity — there needs to be a deeper shift in perspective and understanding that head coverings aren’t equivalent to crime. “No one is saying you can’t wear it. Just appreciate what you’re doing and the privileges you have [of] being able to do that without being racially attacked,” said Saker.

With the likes of Cara Delevingne, Halsey, Julia Fox, and Kim Kardashian wearing balaclavas and headscarves, their popularity is only on the rise — especially at a time where, because of the weather and this whole mask thing we’re still dealing with, face coverings are still needed.

“You can put your balaclava on and take it off as you please all while being told how gorgeous and ‘high fashion’ you look, but hijabi women do not have that privilege,” said Mohammad in an Instagram post. So when you tuck away your balaclava come springtime, remember that the discrimination against those who wear head coverings year-round is an ugliness that can’t be masked with crochet or bunny ears.