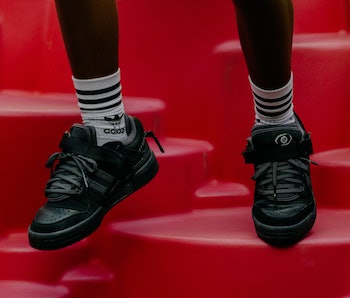 Bad Bunny’s all-black Adidas Forum Low is made colorful by its backstory, which the Puerto Rican artist shared today. Inspired by Benito’s own experience of growing up and going to school, the monochromatic Forum serves as an invitation to the next generation to redefine and reimagine their everyday uniforms — whether that be their favorite outfit or actual school uniform.

A press release reveals that the long-awaited black sneaker — debuted back in April — arrives alongside a campaign featuring young students, reclaiming their educational environments with Bad Bunny’s kicks. The campaign film highlights each student’s individual personality as they reinterpret their uniforms with Benito’s black shoes, which allow for customization through multiple laces and interchangeable tongues.

Bad Bunny has class — Previously named “Core Black” thanks to its tonal makeup, the collaborative sneaker is now known as the “Back to School” Forum Low to celebrate its scholastic backstory. Designed to “empower individual expression,” according to a press release, Bad Bunny’s next Adidas Forum Low boasts a light black leather upper contrasted by darker black suede overlays.

Co-branded sock liners, neon yellow polka-dot laces, and a bright yellow outsole accent further differentiate the sneaker from Benito’s past two Forum Low collaborations, which also come with a double tongue, buckle ankle strap, and “Ojo” (eye) graphic. Such features — and Bad Bunny’s influence — have made his sneakers Adidas’ hottest this year: His “First Café” pair is reselling for up to $1,685, and his pink “Easter Egg” iteration is marked up to nearly $1,000.

According to StockX, Benito’s low-top sneakers have even become the most coveted non-Yeezy Adidas sneaker in the reselling site’s history following its insane reselling prices — hinting that plenty of consumers and resellers alike will be after the artist’s next Forum Low.

Hope you can school resellers — Arriving on August 17, the “Back to School” Bad Bunny Forum Low sneaker will retail for $160 — a bargain considering the resale prices. Consumers can try their best to score Bad Bunny’s sneaker on the FRSH website, Adidas’ Puerto Rico website, or Adidas’ Confirmed app, where they can now enter a lottery-based draw to purchase the shoe.

Those lucky enough to score the sneaker will likely incorporate it into their everyday fit much like a uniform, regardless of their school status. Just like our first day of class fits, Bad Bunny’s Forum Lows are worth laying out on our beds in anticipation of their debut.