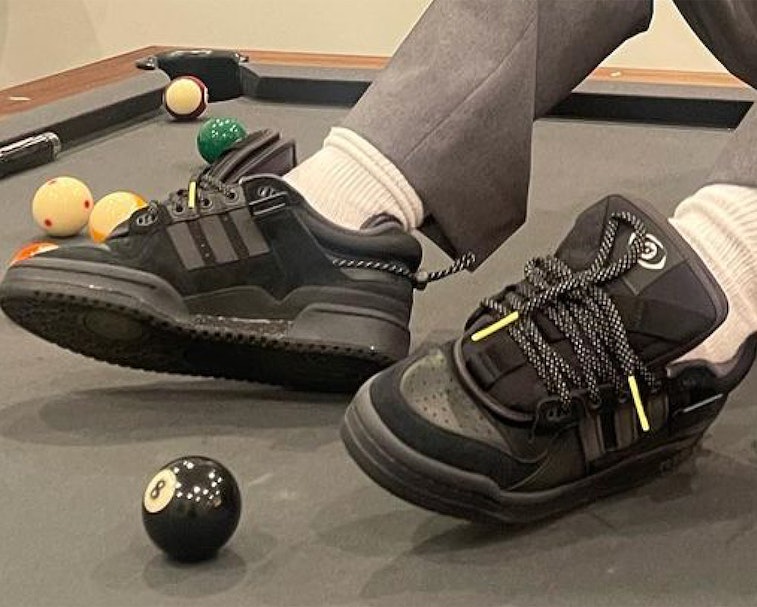 After an explosive start to the year, it’s been a few quiet weeks for Bad Bunny — his fans have gone without new music, new shoes, or a new episode of WWE. The artist isn’t one to disappoint his audience, though, which is why he may be launching his next collaborative Adidas sneaker soon.

Eagle-eyed fans may have seen Bad Bunny sporting his upcoming Adidas Forum silhouette back in April when he made an appearance on WWE. But thanks to Benito’s right-hand man Janthony Oliveras, we’ve gotten a closer look at the musician's imminent collaboration. As seen on Oliveras’ Instagram, the sneaker takes on a tonal makeup similar to the previously-released “First Café” and “Easter Egg” pairs. This iteration of the low-top Forum shoe is the darkest out of the three, though — its all-black upper makes us wonder what Bad Bunny’s inspiration for the sneaker was.

Black Bunny — Reportedly called “Core Black,” the upcoming sneaker boasts a lighter black leather upper contrasted by darker black suede overlays. And much like its predecessors, the shoe comes bearing all of Benito’s additions to Adidas’ low-top Forum silhouette — including an added clasp, an “Ojo” (eye) graphic, and supposedly, a note reading “Yo Visto Así,” or “I dress like this.”

With the overwhelming success of his last two Adidas sneakers, Bad Bunny seems to be keeping his design classic. Looking at the shoe’s laces, though, the artist has modified his best-selling footwear slightly. Thick rope laces have replaced the Forum’s already wide laces, sporting white speckles on their black base. Hits of neon yellow hit the aglets to add a pop of color to the dark shoe.

Staying in the shade this summer — When it comes to summer, most consumers are looking to buy white sneakers — making Benito’s all-black design even more striking. But if his past shoes are any indication, the season won’t affect the “Core Black” sneaker’s sales at all. With the “First Café” pair reselling for up to $1,550, and the “Easter Egg” iteration marked up to nearly $700, plenty of fans and resellers alike will be after the shoe when it drops for the retail price of $160. Just when it’ll be released, though, is still unclear.

Unless Janthony can hook us up with a pair, we’ll most likely see the all-black Forum Low launch on Adidas’ Confirmed app, which will subject the footwear to a lottery-based draw. Like the past two drops, fans can also enter raffles at participating sneaker boutiques to increase their chances of obtaining Benito’s shoes — or they can try to make the sneakers themselves.