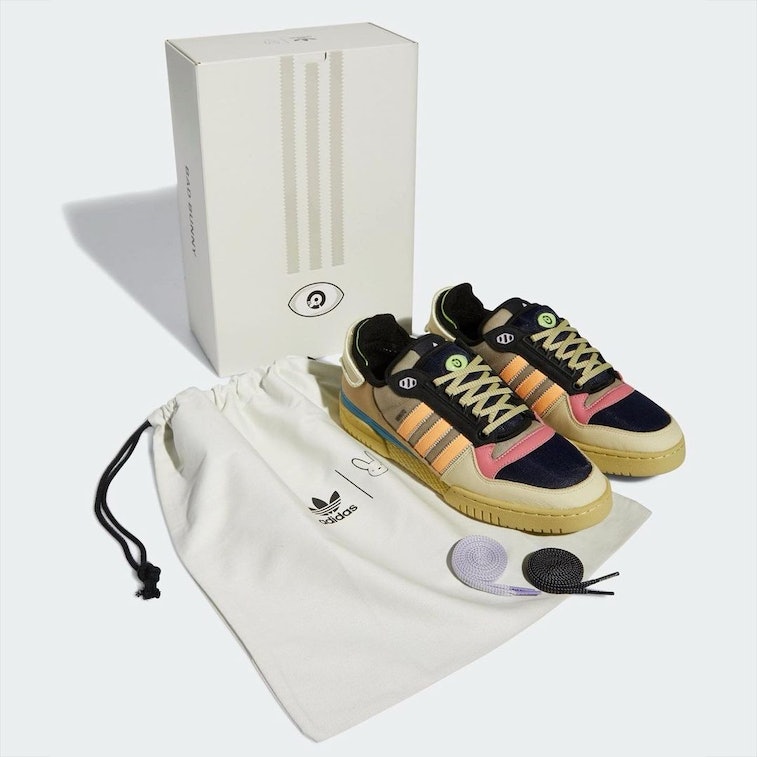 Latin superstar Bad Bunny is making consistent headlines and January’s not even over yet. One day after announcing a world tour via Instagram, the artist is gearing up to present a brand new iteration of the Adidas Forum Powerphase sneaker.

The man, the myth, the sneaker designer — Given Benito’s ultrapopularity in pop culture and the success of his past Adidas collaborations, he’s getting a bit of artistic freedom with this next sneaker. The shoe is a hybrid that combines the familiar Forum’s upper with the Powerphase’s sole. A main color palette of tan and black gets accented by shades of pink, blue, green, and orange for design that’s more colorful than his bright yellow and all-black Forums.

As for the details, Bad Bunny scrapped the big buckle that usually equips the Forum and added Velcro overlays, his signature third eye logo on the tongue, and “Benito” next to the Three Stripes. A mix of materials from suede to neoprene to plastic rounds out a shoe that’s as diverse as el conejo. The pair is packed in a specially branded box, similar to the past releases, with a dust bag and black and lavender laces.

It doesn’t stop there — With his Ultimo Tour Del Mundo this spring, an upcoming film alongside Brad Pitt this summer, World’s Hottest Tour this fall, a new album, and probably more unreleased Adidas sneakers, the Puerto Rican-native has his hands full this year.

There’s no release date just yet for Bad Bunny’s Adidas Powerphase, but expect a price tag of $160 – if you manage to get them retail. With all his upcoming ventures, the tried and true fans can expect to spend a pretty penny on their Latin dreamboat. Brings new meaning to “Hoy Cobré,” doesn’t it?