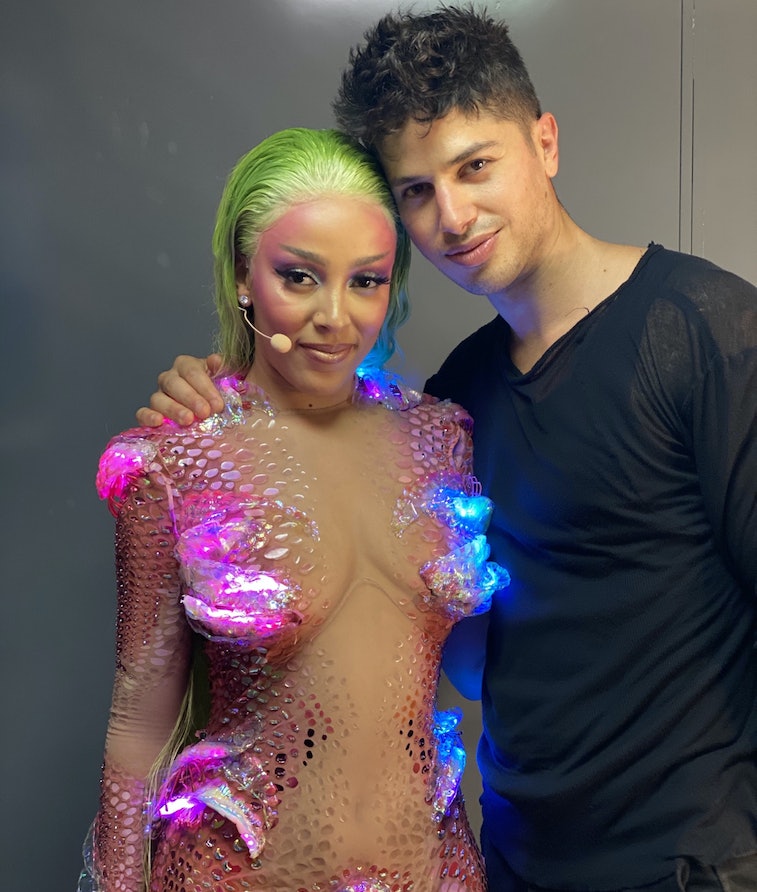 Over the past decade, the designer has made himself the go-to contact for anyone looking to flirt with the future, asking his clients how they choose to express and reflect technology’s presence within fashion. At 33, he’s already created a number of iconic outfits, including the renaissance-esque robot suit Lady Gaga wore during her 2018 “Enigma” residency, Doja Cat’s “alien fish goddess” look at the 2020 VMAs, and the luminescent bodysuit Lil Nas X wore in his headline-making “Call Me By Your Name” music video.

When Levine kicked off his career 10 years ago — working with Gaga to create custom leather looks for a Rolling Stone portrait and the artist’s “Marry the Night” music video — he defined himself as the brand of the 21st century. The title seems to prevail today, a lengthy roster of celebrity clients and museum exhibits later: “I’m setting the perception for the future… [which] pushes me to continue to reinvent and do things that people haven't seen before,” he told Input in an interview.

In 2014 — prior to the NFT and digital fashion hype of today — Levine began experimenting with augmented and virtual reality fashion, two concepts “only now” becoming acceptable and widespread, he says. The designer says he lives with a “pressure” to come up with the next top thing, which he admits is something that both excites him and keeps him up at night.

Up next on Levine’s to-do list is achieving “new aesthetic standards” with his work, creating “new paradigms within the fashion ecosystem” that will be available to anyone — not just the “beautiful, dirty rich,” as Gaga puts it. His projects are for people “who love and covet unique styles,” regardless of income, and the rise of virtual fashion is helping Levine’s custom looks reach a wider audience.

Put into simpler words, Levine wants people to look at his designs and say, “what the hell is that?” His latest piece, the Terrelli bag, takes inspiration from an ancient sea creature called the Dunkleosteus Terelli, whose appearance may make some utter the previous phrase.

In fact, most of Levine’s designs are influenced by the biology of the natural world, despite their technological details. “Science is like a reflection of the general human consciousness,” he says, which pairs perfectly with the expression of fashion. By mixing biological structures with his signature utilitarian tailoring and a touch of elegant ‘30s and ‘40s fashion, Levine is able to create a unique blend of designs with a subtle sci-fi appeal.

He starts most of his designs with a “scribble and refine” technique, he says, later reimagining his work through 3D prints and “new processes” which he claims are constantly being created. The detail-oriented design experience is where the designer pulls some of his inspiration from, adding — or taking away — certain features with experimentation. Levine’s process for the Terelli bag began three years ago, he says, inspired by the protective armour seen on the Dunkleosteus Terelli.

“I wanted to create brand-building styles that made people go ‘wow,’” he says of the process, “with a focus on reinventing a certain accessory.” Through the bag’s development, Levine created nine different styles of the Terrelli, narrowing the design down to three clutches by dilating its shell. And after tracking down a manufacturer to produce the purse’s clamshell frame — finding one within the last booth at a Milan trade show three weeks before prototypes were due — the Terrelli was “beautifully crafted.”

Yet much like the Dunkleosteus Terelli itself, there’s further research to be done on the Terelli bag, Levine claims. To further his creation process, the designer is touring the purse through trade shows so that people can interact with the bag, touching its texture and offering critique. As of now, iridescent finishes and video screens are possible alterations.

“My goal is to have it in as many hands as possible.”

Levine wants to limit the Terelli bags’ release to every few years, much like how cicadas reemerge, he says. But the purse isn’t an exclusive celebrity custom, he adds, noting how anyone is able to inquire about the bag’s release online. “My goal is to have it in as many hands as possible,” Levine says, a process that becomes easier with the expansion of digital fashion.

“I don’t necessarily want my designs to only [be available] to people that have money,” Levine says, although that notion is easier said than done. To account for the cost of raw materials, dying, cutting, shipping, and actual labor — of which there can be hours, weeks, or even years of — many of the designer’s pieces cost thousands of dollars. But in the digital world, the creation process becomes easier, and more importantly, less expensive.

“I'm really excited about digital fashion,” Levine says, citing the medium as a way to bring his aesthetic to a higher volume. “A tentacle jacket could cost me $50,000 to produce, but now I can make a digital [version] that people anywhere can purchase and wear in augmented reality.” Especially on social media — where much of someone’s identity is encapsulated in profile pictures, he says — it’s important for digital personas to have digital ways of expressing themselves through fashion.

The extensive process behind Lil Nas X’s luminescent jumpsuit in his “Call Me By Your Name” music video.

At this year’s Art Basel art fair in Miami, Levine tested his digital designs, partnering with Holaplex to create a series of NFTs. Mimicking the theme and silhouettes of his tangible Time and Light runway show, the two augmented reality styles were inspired by computationally generated fractals and allowed users to wrap themselves in metallic tendrils alongside a matching visor. After a series of bids, each sold for $1,230 and $5,738, respectively.

“When [people] put on my clothes or accessories, they get an exalted feeling. They feel powerful. They feel sexy.”

Compared to Levine’s made-to-measure pieces — which cost around $34,000 to $69,000, with even greater values attached to custom creations — the designer’s virtual renderings are much more accessible to those who don’t hold the same “rockstar” status as Gaga or Lil Nas X. Still, Levine says he’d like his clothing to maintain its rockstar appeal, even when produced in larger quantities. “When [people] put on my clothes or accessories, they get an exalted feeling. They feel powerful. They feel sexy,” he claims. Even the biggest names have “transformed before his eyes,” Levine adds, becoming one with his design.

When the designer worked on Gaga’s outfit for her Enigma residency, she told him she wanted to be “a circuit board.” When he worked alongside Jeffree Star, the makeup mogul told Levine he wanted to be “stained glass.” And when Levine molded Beyoncé’s multi-million dollar face for a cast, she told him (through pen and paper) she was “having so much fun.” It’s the latter feeling the designer hopes to achieve with his digital digs — with elements of the former, of course.

Regardless of what names Levine works with, however, it’s his own that has spearheaded the virtual fashion landscape. The space still holds a myriad of “super evident” market gaps, the designer claims, although he doesn’t elaborate on what the gaps are, only that he’ll fill them with a “whole new class of products” that are currently in the works and under intellectual property protections. With a reach across new mediums and demographics, Levine’s legacy is only getting bigger and better.

Celebrities will still go to the designer for his intricate, tech-based garments — but every-day people will be able to enjoy his bionic looks, too, albeit online. The metaverse, and its accompanying digital fashion, is “a whole new world,” Levine adds. But it’s his world nonetheless.