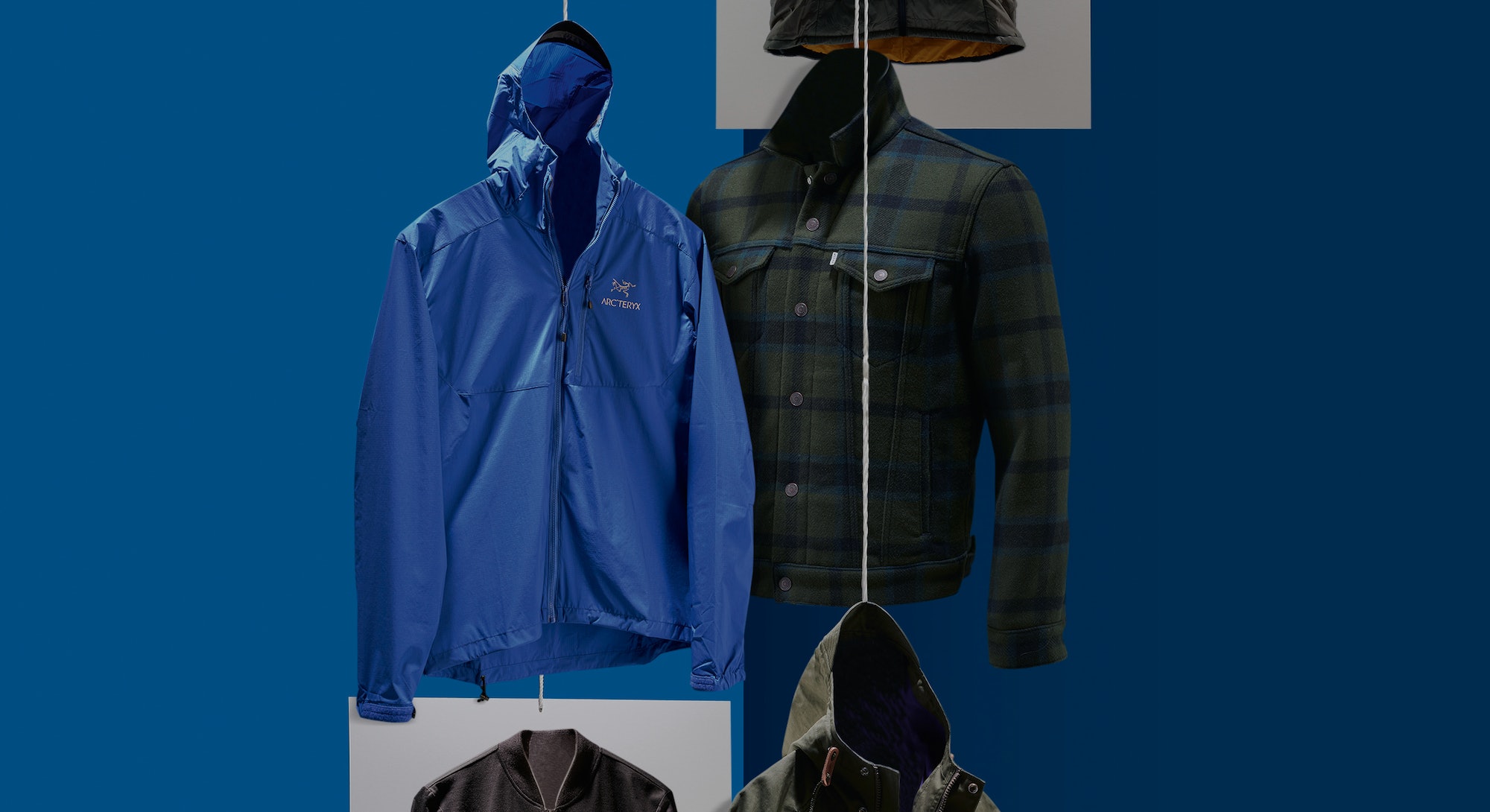 Approximately 75 million years of dinosaur evolution brought on the existence of the Archeopteryx, a Late Jurassic creature widely accepted as the first link between reptiles and birds. What didn’t take as long, however, is the process leading to Arc’teryx becoming one of the hottest brands in the world.

Compared to any other outdoor companies in 2021— and many proper fashion labels, for that matter — few received as much attention as Arc’teryx, the Canadian brand that was founded in 1989. There were memes, Tik-Tok trends, and a highly acclaimed collaboration with Jil Sander, all with Arc’teryx’s name attached. But more importantly, its gear was everywhere — it could be spotted anywhere from New York City’s SoHo neighborhood to nature-loving havens such as Portland or Boulder, Colorado.

Apart from the lone Jil Sander collab and another with Palace in 2020, Arc’teryx hasn’t done much to draw attention outside of its usual crowd of hikers, climbers, and explorers with high budgets. It’s largely followed the model of Patagonia, which has only ever collaborated with the bootmaker Danner, rather than that of The North Face, which has eagerly catered to streetwear and fashion enthusiasts by working with the likes of Gucci, Supreme, KAWS, and many more overt progenitors of “cool.”

Arc’teryx doesn’t look much different than it did 10 years ago, barring developments in technology, but the people who wear the brand do — and there’s a whole lot more of them, too.

The outdoor trend that’s still prevalent today can be traced back to 2017, when the term “gorpcore” was penned by Jason Chen of The Cut. Chen noticed a sudden proliferation of fleece jackets and puffer coats from brands such as The North Face, Patagonia, and Columbia and saw it as a natural progression of “normcore,” which repurposed bland garments such as stonewash jeans and white crew socks into a fashionable rejection of consumerism with a dash of irony.

Arc’teryx was name-checked in that article, too, though it was nowhere near as popular then compared to other outdoor stalwarts. That changed as soon as some of the most stylish people in the world began wearing it. Frank Ocean wore a toque from the Canadian brand at Paris Fashion Week in January 2019. A year later, and again at Paris Fashion Week, the late Virgil Abloh wore an Alpha SV jacket during his Off-White show and even sent Bella Hadid down the runway in hacked-up Arc’teryx jackets. Just weeks after that, Abloh was spotted again at Paris Fashion Week along with Drake wearing matching camouflage jackets from Arc’teryx LEAF, the brand’s dedicated line for military and police personnel only.

“You’re not even hiking, name a mountain.”

As has become the norm in hyper-contemporary fashion, Arc’teryx reached its peak when it became the subject of two Tik-Tok trends last year. In one, users immediately take their newly purchased jackets into the shower to test their waterproofing capabilities and marvel as the water beads off. In the other, prone to the apparently most dedicated of Arc’teryx customers, users shed one layer of their outdoor gear to reveal another — repeating the steps until you may see one person wearing as many as a dozen Arc’teryx pieces.

Soundtracking many of these videos is the song “Arc’teryx” by YT, seemingly created for the express purpose of tapping into the clout on TikTok. The lyric you’ll hear most is: “Arc’teryx on me, we don’t rock no Patagonia / Arc’teryx on me, I could go hiking Snowdonia.”

A TikTok user who goes by the name Yijihoon, a techwear enthusiast who grew up in Seattle and now lives in Orange County, is one of many who’s helped the hashtag #arcteryx rack up more than 219.5 million views. He has several posts of him applying water to his Arc’teryx gear, and one of them alone has generated 5.1 million views on the platform.

Yijihoon says he first came across Arc’teryx two years ago when he found a Beta AR jacket on sale for $300, usually $600, at the brand’s store in Seattle. He was impressed by the quality of the piece, from its light weight to taped seams. Even though he grew up hiking in the area, he’s drawn more today to technical apparel than outdoor. But Arc’teryx, with its minimalist designs and fondness for blacks and grays, fell in line with his aesthetic, which looks more like a video game than base camp.

“I know a lot of people tend to look down on [the outdoor trend],” Yijihoon told Input in an interview. “It’s mainly the hiker community saying, ‘You’re not even hiking, name a mountain.’ But I see it in a positive light. It’s really sharing the culture of hiking and the excitement of technical apparel.”

Outdoor gear is hardly the first category of clothing to be appropriated outside of its usual field of use, and it won’t be the last. Just like running shoes or baseball caps, outdoor apparel is convenient for everyday life — namely because it’s warm, waterproof, and just plain comfortable. There’s also an ease of mind that comes in knowing you’re prepared for the worst, even if that may just be a brief exposure to rain on your way to work.

Arc’teryx’s minimalism is also part of its wider appeal, as its garments are typically less flashy and more utilitarian than The North Face. This quality is what made it a perfect match to partner with Jil Sander, the brand whose founder was known as the “Queen of Less” and still carries on with the same spirit under creative directors Lucie and Luke Meier after her retirement in 2013.

When Arc’teryx first began rising in popularity only two or three years ago, it was also a way to adopt the outdoor trend without turning to what were already the usual suspects. As is often the case, key stylish folk turned to a more niche brand to stand out from the crowd, only for that very brand to go on to blow up.

“We’re not overtly fashionable, and we’re not following micro trends.”

Arc’teryx hasn’t outright rejected its embrace from the fashion community, but it has been careful in its interactions. Jil Sander and Palace remain its only official collaborators in the space, but the brand has engagement in key partnerships with other creatives that fall just short of the descriptor.

Wildly popular upcycling designer and artist Nicole McLaughlin is an ambassador for Arc’teryx, and though she hasn’t released any products with them, she’s served as an advisor, led public-facing workshops, and sat on the brand’s panels. Shaun Crawford, a graffiti artist and frequent graphic contributor to Supreme, has also applied a top-secret tie-dye treatment to Arc’teryx jackets that have gone on sale in small quantities, in-person only. The brand even planned a holiday party in New York City with Throwing Fits, the podcast that adores fashion and streetwear as much as it roasts them into oblivion, until the Omicron variant forced a cancellation.

Back in 2020, sensing what was already bubbling and yet to come, Arc’teryx’s vice president of design spoke to Hypebeast and emphasized that the company’s focus would remain the same. “We’re not overtly fashionable, and we’re not following micro trends,” Dan Green said. “The moment we pivot and try to address the streetwear world, we’ll totally lose it.”

Leaning fully into streetwear and fashion, as The North Face has, would likely lead to an immediate payday, but as quick as it may come, it can also fall off precipitously. Gorpcore has now had a hold on culture for five years, growing particularly strong in the last two, but it’s an inevitable fact that the masses will eventually move on to something else.

While outdoor gear is still having its moment, though, Arc’teryx also stands out as a status symbol. Its prices are considerably more expensive than those of the quintessential American trio and just shy of Stone Island and Moncler, two out-and-out luxury brands. Just one of Arc’teryx’s shell jackets, its most popular segment amongst recent adopters, comes in at under $200, with most pieces in the range of $300 to $500.

Because of Arc’teryx’s popularity and the high prices people are paying for its gear, a second wave of memes has emerged in which insiders and outsiders alike poke fun at the phenomenon. Up for riffing is the fact that there are other waterproof jackets on the market for cheaper (such as a Domino’s staff jacket), people attempting to turn outdoor apparel into an entire personality, and, of course, the frequent absence of anything to do with nature.

Themba Kimani, a 21-year-old college student in Seattle, ribbed himself and others with a TikTok video that garnered 1.7 million views. In it, his “NPC” friend with “no drip” is instantly transformed by wearing an Arc’teryx jacket and toque, and the customary water test baptizes him into the realm of the properly fitted. Kimani enjoyed the attention his post received, and the commenters who were triggered by it, but he’s still very much a fan of the brand he first discovered while working at REI.

“I think it speaks to how versatile and unique the designs of Arc’teryx are,” Kimani says. “If it’s able to serve its purpose and function and people are able to recognize its aesthetic qualities, too, then I think they’re doing a really good job.”

In our logo-crazed culture, one can’t diminish the appeal of Arc’teryx’s fossil logo either. Why it’s seen as cool can be traced back to the simple obsession so many children have with dinosaurs. They’re awesome, almost unimaginable monsters that roamed the earth many millions of years ago.

If any digital record of today remains thousands or millions of years ahead, it wouldn’t be hard to figure out why so many people turned to garments that effectively protect us from the elements. Much harder to fathom, really, would be why anything less utilitarian was ever held in favor.