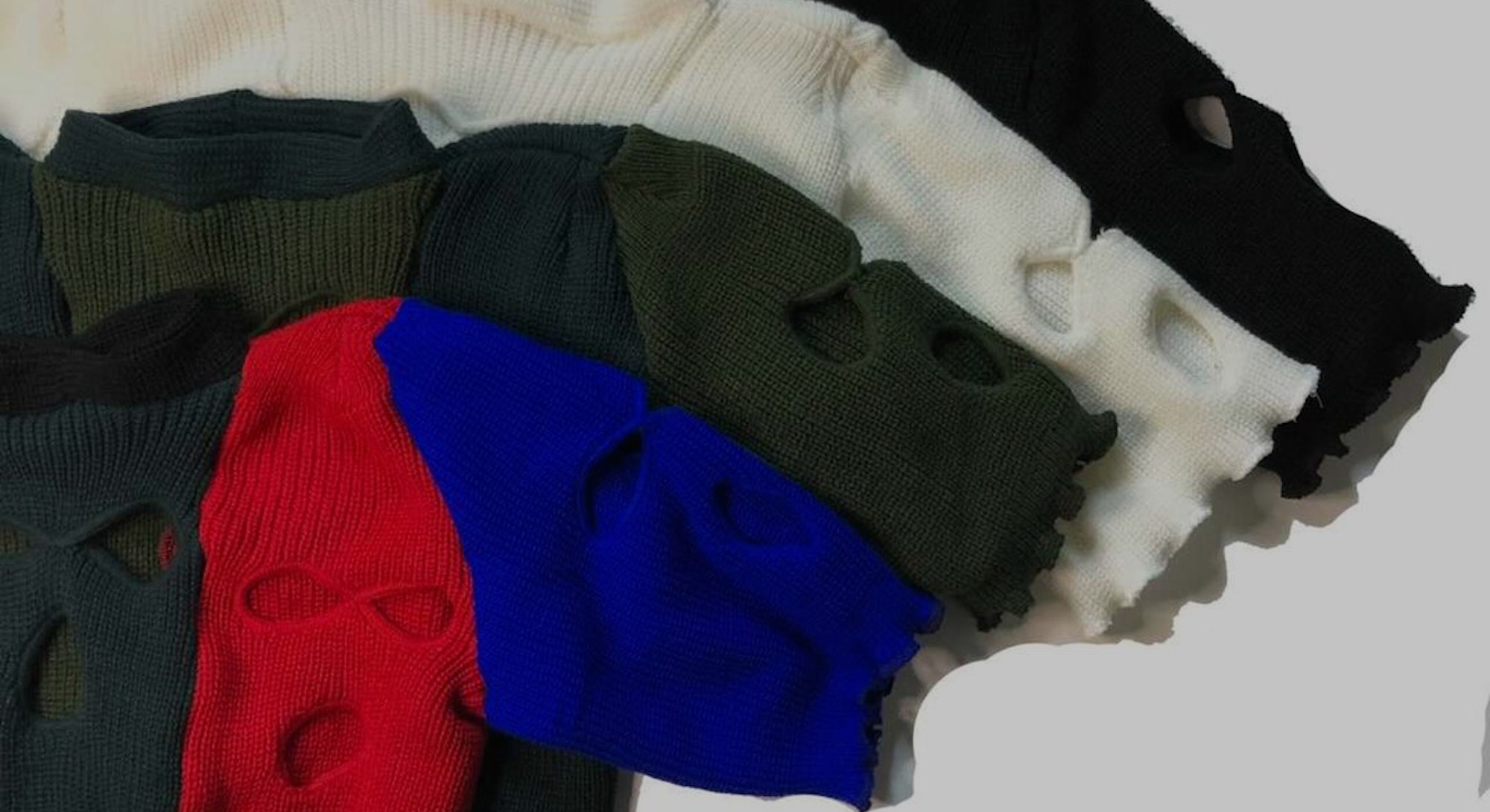 In 2018, they went to Goodwill every morning and scoured through bins of old jackets, homeware fabrics and beat-up handbags. “Stephanie and I would go shopping at the Goodwill bins,” Felix said. “We always knew there had to be this recurring item that people always overlooked that could be turned into something.”

For Felix, that recurring item was the ski mask. He bought a few masks with the intent of creating a garment out of them, but let the idea simmer for two years. This past September, Felix created a long-sleeved sweater out of 11 black ski masks.

Imagine a standard ski mask: the knit material covers your head and neck, with holes for the eyes and mouth. The ski mask came about during the Crimean War of 1854, when Great Britain, Turkey, and Sardinia fought against Russia, and British soldiers wore knit head coverings to protect them from the cold. In recent years, people have worn ski masks to conceal their identity while committing crimes.

In 2020, the ski mask has shed its dark connotations to become a stylish statement, thanks to Felix’s innovation of the “Ski Mask Knit,” released under his brand "Lasher Felix." The name Lasher comes from a nickname that Felix was called in school because of his long eyelashes.

Growing up in Long Beach, California, Felix wasn’t enamored with fashion or labels. He wore black hoodies, Vans knockoffs, and often skipped school to go skateboarding. After dropping out of high school, he spent 10 years playing guitar in shoegaze-grunge bands. It wasn’t until 2017 that he developed an interest in fashion design, after discovering the “rollercoaster belt” that Matthew Williams created for Alyx Studio — which was inspired by a trip to Six Flags. Shortly after, Felix moved to Los Angeles with Libanati so they could pursue their respective creative projects together.

Some of Felix’s first projects include harnesses made out of deadstock hardware and Dickies pants repurposed with printed fabrics. “I like contrast. I like really edgy and raw, rugged things, but also I really like soft and beautiful things. The combination of those things fits together,” said Felix, 28. “I think that’s where the ski mask comes from. It’s this soft, cozy knit sweater, but it’s this rugged, underground thing associated with robbers.”

Felix learned his sewing skills from Libanati, a self-taught fashion designer who’s known on Instagram for her “Outline Tee,” a rib knit tee with contrasting overlock stitching on the outside. Libanati and Felix work as a team, helping one another with their designs. “We’re both influenced and kind of come from the music and art world,” Felix said. “We’re interested in creating and being a part of a community that kind of pushes that forward.”

Each Ski Mask Knit sweater is made in Felix and Libanati’s L.A. apartment on their two sewing machines: a Juki straight-stitch and a Juki serger. To make the sweater, they cut each ski mask in half, serge any cut ends and then sew them together. There is no concrete pattern for the ski mask sweater — each style is determined by numbers and trial and error. For example, a full-length sweater takes 11 ski masks, a long-sleeve crop takes 7 masks and a short-sleeve crop takes 5. “We’re always refining, adjusting, and figuring it out,” Felix said.

For now, each knit is “one-size fits most,” as creating a range of sizes would complicate the process and require a much larger team. The duo handles every aspect of the business from start to finish, which can include sourcing fabrics, taking photos for social media, or mailing out orders, among other things. “All the limits we create are to make sure our customers are happy and satisfied,” Libanati said.

“We’ve been locked down, but this is the first time I’ve felt like I was living my life.”

Made in small batches, Lasher Felix designs are inherently sustainable. Creating mindful clothing comes naturally to both Felix and Libanati, who have been thrifting for years out of necessity and live minimalist lifestyles. “L.A. has always had a resale market so I think it’s just in our California style to recycle on all fronts,” Libanati said.

Creating clothing out of used materials also stems from the duo’s artistic ethos. They shop at thrift stores instead of fabric stores and design with unconventional materials to guarantee that the garments are unique. After all, the Lasher Felix customer is someone who likes to set trends, rather than follow them. Felix describes the customers as “people who have an independent sense of self.”

As small business owners, Felix and Libanati are passionate about supporting other small businesses, whether they’re shopping for themselves or buying materials to design with. They source the ski masks for the knits from a man named Luis at a local flea market, and take their sewing machines to a family-owned sewing shop when they need repairing.

Cultivating relationships with suppliers and customers is more important to the designers than the clothing itself. “We just want to have people that we care about and care about us,” Felix said. “Our art becomes secondary.” The ski mask sweater is definitely an innovation, and can be worn by people of different sizes and genders. You can style it with your streetwear, create a punk-inspired vibe, or just lounge at home in it.

In the future, Felix only intends to grow the brand. He plans to refine ski mask knit accessories like scarves and beanies. “It’s just really nice to be able to do what I want to do,” Felix said. “We’ve been locked down, but this is the first time I’ve felt like I was living my life.”