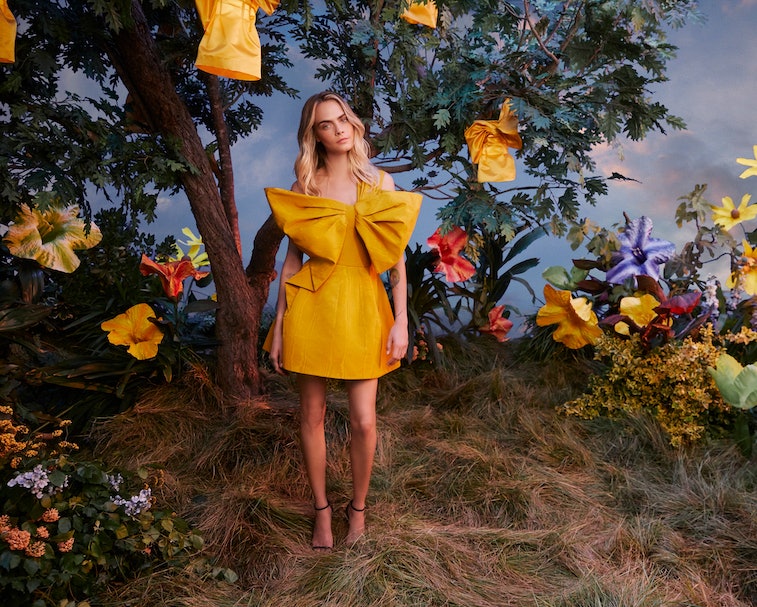 Amazon's apparent desire to take over every aspect of our lives has officially come for the luxury sector. The retailer has launched its Luxury Stores outpost today, with Oscar de la Renta as its first and only label. For now, Luxury Stores can only be accessed by Prime subscribers through the mobile app. Those who didn't receive an invitation can apply for access through Amazon's website.

Other ready-to-wear, accessory, and beauty brands are expected to be added to Luxury Stores in the coming weeks. Oscar de la Renta has been given an unprecedented level of independence from Amazon and has the ability to decide what will be sold and for how much, what will be showcased for consumers, what kind of customer service they'll offer, and whether or not they ship through Amazon. The label also partnered with Amazon on a launch video for the platform starring Cara Delevigne.

360-degree views — The most noteworthy feature for Amazon's Luxury Stores is an interactive 360-degree view that allows customers to see how different items fit on various body types and skin tones. Each item of apparel can be seen on several models for each size and viewed at different angles.

This feature was made, Amazon Fashion president Christine Beauchamp told Vogue, "to overcome and shopping challenges pertaining to size, fit, draping, and whether the garment will be flattering."

The disruption begins — Beauchamp also told Vogue that Amazon has sold more than a billion fashion items in the last year on mobile alone. That should be an enticing figure for luxury labels, especially given the uneasy state of retail as is. Existing practices are due for a change, and Dries Van Noten penned an open letter in June calling for better alignment of deliveries along with the seasons they're intended for and limiting discounts to end-of-season.

Partnering with Amazon may feel gross, but it could provide the opportunity to initiate those changes because of the autonomy the retail giant is granting its labels. And of course, there's the sheer scale of Amazon, which has more than 150 million Prime members alone. The massive user base not only provides millions of potential customers, but also a treasure trove of data.

"In general, learnings are something with Amazon that we can’t get to the same scale with other people," Oscar de la Renta CEO Alex Bolen told Vogue. "We think we know things about our customers, but do we have it on the scale that Amazon is going to be able to gather it? We don’t."

Like it or not, the Amazon takeover of luxury has begun.