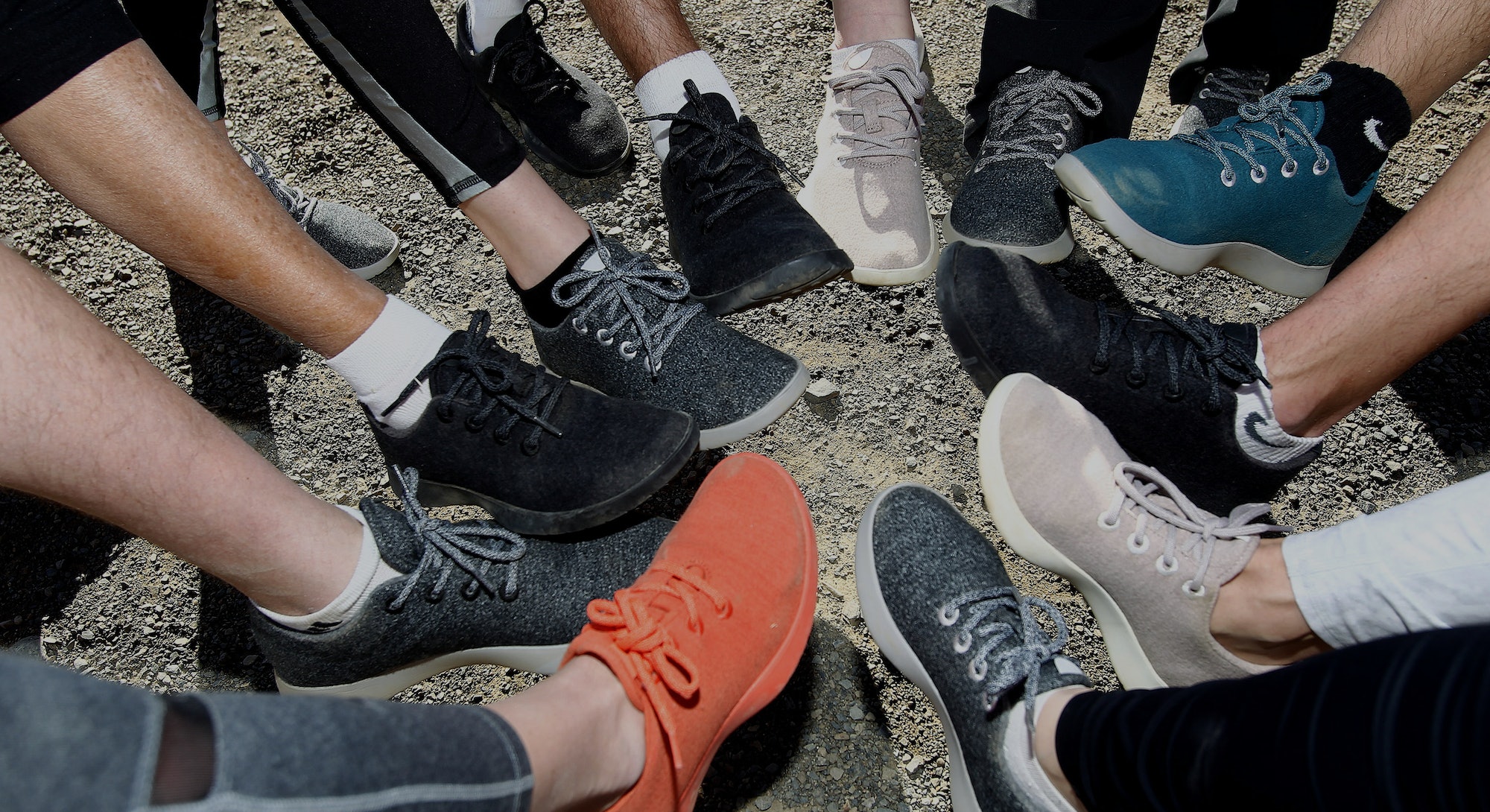 When James Harris and Lawrence Schlossman, formerly of Failing Upwards, decided to launch their own podcast through Patreon, they were looking for a way to debase themselves for money.

Once they reached the $12,000 mark in monthly subscriptions for Throwing Fits, they promised to wear Allbirds sneakers for a week and photograph the results for viewing (and laughing) behind a paywall.

"Allbirds are patient zero for a lot of things that we shit on and hate," Schlossman says. "It would be too on the nose to wear Skechers Shape Ups. This isn’t a fucking prank video. We were like, ‘What are literally the most basic, terrible sneakers that have taken over the landscape that we occupy, even though cool people don’t wear them." He also describes Allbirds as an "aesthetic abortion," and while acknowledging that they care about the environment, says "all corporations are evil."

It isn’t just Throwing Fits, an irreverent podcast that pokes fun at the absurdity of dudes obsessing over clothes and sneakers, that has turned Allbirds into a punchline. The sustainability-focused, direct-to-consumer footwear brand has long been a punchline among sneakerheads. In its rise to a valuation of $1.4 billion in 2018, after just two years of business, Allbirds has won over tech bros and other less stylish consumers — but bonafide sneakerheads have remained at arms length.

Despite this, Allbirds is moving forward in its encroachment of a space where it may not be wanted. Early this summer, the brand announced an atypical partnership with Adidas in the most trite way possible. Their two Twitter accounts engaged in a scripted exchange, framing the upcoming collaboration as two competitors setting aside their differences for the greater good of the environment. Then, just last week, Allbirds teamed up with the Los Angeles-based streetwear brand Chinatown Market and upcycling designer Nicole McLaughlin for a capsule of one-of-kind pieces to be auctioned off for charity.

Giving credit where it’s due, Allbirds has made admirable inroads in creating more sustainable sneakers. Each pair is made primarily with four materials: ethically sourced merino wool, tree fiber, sugar-based foam, and proprietary Trino yarn that combines wool with tree fibers. Allbirds also utilizes recycled plastic and nylon in its sneakers, and its packaging is made from recycled cardboard.

Matt Powell, the sportswear analyst at NPD who releases the annual list of best-selling sneakers, points out that collaborations are a drop in the hat compared to the larger market. “Brand must always seek to be introduced to consumers,” he told Input via email. “Collaborations are a great way to do that. Adidas and Allbirds both hope to introduce their products to each other’s customer base.”

Not all of Adidas’ customer base is made up of devoted sneakerheads, and the partnership has led to speculation that Adidas may be seeking to acquire Allbirds. The footwear and apparel giant has pledged to eliminate the use of all virgin plastic and polyester materials by 2024. For all the progress Adidas has already made, including continuously expanding partnership with Parley to use ocean-sourced plastics, Allbirds can help in its steps toward more sustainable production. Nike is also making similar strides, but as the market leader it is big enough not to need any help from the outside.

Good intentions aside, Allbirds sneakers just aren’t attractive. From the beginning, they’ve looked like a pair of Yeezy 350s with any semblance of cool extracted and discarded — painfully plain, tragically unremarkable, and geared toward those who see the act of getting dressed as a necessity and not a means of pleasure and expression.

According to Harris, Allbirds are for “Silicon Valley tech dudes, not even sales guys because they spend too much money, but product guys who are all about life hacks, eliminating choice, the four-hour body, and soylent.” That’s a far cry from those built in-home displays for the sneakers, set alarms for the Sisyphean pursuit of weekly drops, and consider a Supreme box logo the holy grail.

You can’t buy your way into the culture

Streetwear and sneakers aren’t what they used to be. Scarcity has created a multi-billion dollar secondary market that makes it all but impossible for the average consumer to secure coveted shoes and apparel. The only winners in this game are people who fancy themselves entrepreneurs because they’re armed with a bot and can command a sharp price increase from the poor saps who lose out. This puts the hottest gear in the hands of those with enough money to participate, changing the game from “if you know, you know” to “pay-to-play.”

And yet, streetwear and sneakers still do mean something to its core adherents. There’s a clear line between true devotees, passive consumers who’ll eventually move on to the next cool thing, and culture vultures in it just for the spoils. Those in the first camp, and even some in the second, are savvy enough to recognize the third. You can’t buy your way into the culture, and you can’t manufacture cool. “If some person is able to make Allbirds resonate with a subset of young people who care about coolness and whatever the fuck the culture means at this point, that person is this generation’s Don Draper,” Harris says.

From the outset, streetwear carried a “for us, by us” mentality. It was born from Black culture first and foremost, with skate, surf, and punk culture playing a major role and Japanese consumers setting the market ablaze. To this day, Black contributions to streetwear are still under appreciated — made even more egregious by the white-owned and oriented businesses coming to crash the party and cash out.

It doesn’t get much more white than Allbirds, a company founded by a former New Zealand rugby player and a biotech engineer who cut his teeth San Francisco. but the company is far from the first to seek out the spoils in a space where it hasn’t typically operated.

“People think that Silicon Valley and big tech are going to save the world, but look what’s happening now.”

You know the market has become oversaturated when Ruffles enlists the sneaker customizer The Sole Surgeon to create a pair of Nike Dunks with Anthony Davis’ name attached. Ruffles had to have put some serious cash in the pockets of those involved, and Allbirds likely did the same thing with Chinatown Market and McLaughlin. It can be written off as a part of their marketing budget, with none of the money going toward the communities who originated streetwear and skate culture.

What Allbirds is trying to sell, real sneakerheads won’t buy. The hubris would be shocking, but nothing that a corporation can do is too shameless to believe — especially when it comes from the worlds of tech and venture capital. StockX has engaged in questionable practices, from poor handling of its users’ personal information to a series of added fees and layoffs in its quest to become profitable. Last year, former eBay senior vice president Scott Cutler became StockX’s CEO after several rounds of investments from venture capitalists. No company serves as a better signal of Silicon Valley’s interest in profiting off the culture than StockX.

“People think that Silicon Valley and big tech are going to save the world, but look what’s happening now,” says Harris. “When you take that mentality and apply it to product, it doesn’t mean it’s a fucking go. Disruption is not always a miracle worker, so when you try to disrupt the sneaker industry that doesn’t mean you’re putting out good sneakers.”

After their week of wearing Allbirds, both Harris and Schlossman dispute the company’s claims for the world’s most comfortable shoe. Chalking it up to a sizing issue — Allbirds aren’t available in half-sizes — Harris says he felt like he was “pigeon-toed” all week. “If you take a tech philosophy and apply it to sneakers, shouldn’t shit fit perfectly true to size?” Harris says.

Allbirds may have won over those who view their footwear as an afterthought, but no amount of money and collaborations will win over true sneakerheads. The company is better off staying in its lane, selling ugly but sustainable shoes to people who can’t be bothered to chase cool. It’s going to need more than transparent partnerships with the likes of Adidas and Chinatown Market. But even if Allbirds showed signs of an earnest interest in this world, sneakerheads aren’t so easily swayed.