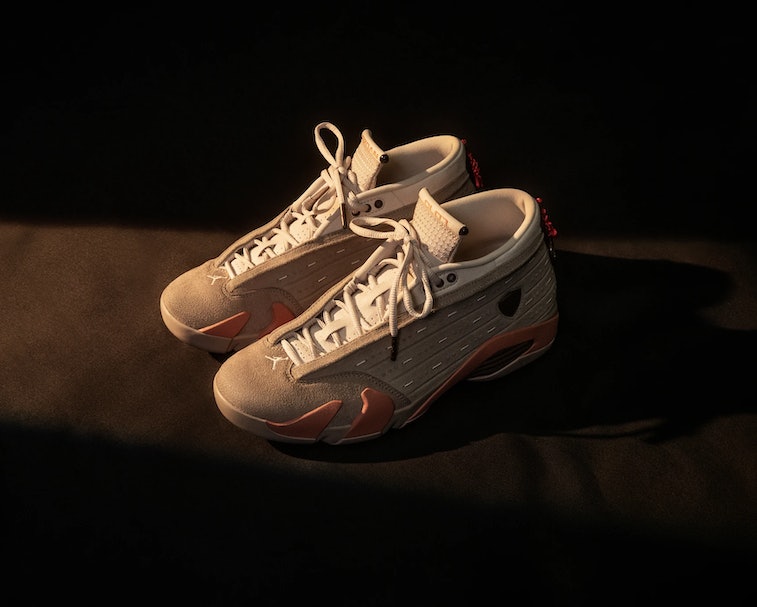 While it didn't exactly go unnoticed, Clot's "Terracotta" warrior-inspired Air Jordan 13 Low from 2018 was something of a sleeper hit. The armor-plated upper featured a subtle nod to Michael himself with alternating panels beset by two and three dots, and it also borrowed its tranquil cream, orange, and grey color scheme from terracotta pots.

These elements now return on one of the lesser acclaimed sneakers from His Airness' career, the Air Jordan 14. Even if you're not in love with the silhouette, you'll appreciate the lowtop version with a new armor pattern that defines the upper. It's a rich nod to China's history and a fresh take on the shoe inspired by Jordan's love for motorsports and, in particular, Ferraris.

So many details — The most fetching addition is an elaborate and traditional knot hanging off the heel and attached to which is the symbol "如意吉祥," a Chinese idiom for prosperity and happiness intended to bring good luck to a game. While the tongue remains the same as the Air Jordan 14's original, it also resembles a traditional Chinese scroll in this context and bears Clot and Jordan branding.

The Jumpman remains atop the toe, but the typical Ferrari-shaped badge on the shoe's lateral side is now blank and rendered in brown leather. Together with cream and terracotta orange, the color scheme now falls in the line with the earthy aesthetic that's become popular in streetwear. By taking on the dual meanings of "Terracotta," Clot's latest Air Jordan collab should appeal to plant lovers and warrior buffs alike.

Coming just before the Chinese New Year — Though it's less overt than some of the other sneakers Nike has cooked up, Clot's "Terracotta" Air Jordan 14's February 8 release date aligns itself with Chinese New Year celebrations.

Further details on the drop are still to come, so look out for updates on Clot and its boutique Juice's Instagram accounts. An apparel capsule will also release alongside it — but we know it's all about the kicks.