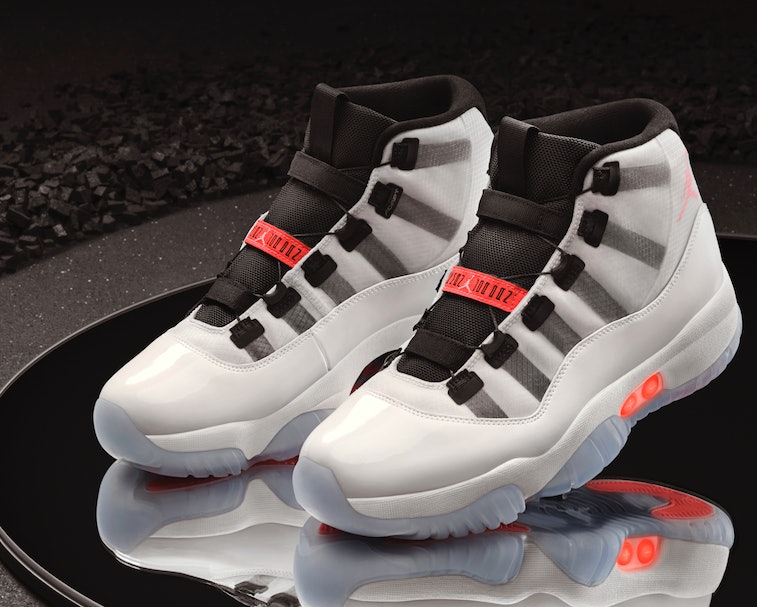 One of Michael Jordan's most iconic signature sneakers, the Air Jordan 11, is about to get a major upgrade as part of its 25th anniversary: a new version of it will feature Nike's futuristic self-lacing technology.

The jump into motorized laces comes as the brand celebrates the 25th of the Air Jordan 11, one of the most beloved sneakers from Michael’s signature line. This is the first sneaker outside of Nike’s Swoosh-branded products to feature Adapt technology, and it’s now the third to apply it specifically for basketball.

The lacing system is essentially the same as the 2.0 version, which allows wearers to control the snugness of their shoe through the Adapt app as well as buttons on the midsole. These buttons can now be customized as well, with a range of colors and a flashing pattern up for choosing through the app.

Adapt is spreading — After finally delivering a workable version of the MAG sneaker from Back to the Future II in 2016, Nike refined its self-lacing tech for everyday use and launched it for a wider audience under the Adapt banner.

The HyperAdapt 1.0 was the first step in getting robo laces to the masses, although its limited numbers and high price point ($720) made it only somewhat more attainable than the Air MAGs. Next up was the Adapt BB, a basketball sneaker featuring the same tech for less than half the price ($350). Adapt was updated this year to allow wireless charging and app integration, and it’s still only been rolled out on the BB 2.0 and Air Max Auto.

The Air Jordan 11 Adapt now becomes only the fourth sneaker of its kind, still giving you the chance to be an early(ish) adopter. For most of us, the motorized laces are little more than a novelty, and a rad one at that. But the tech is a huge help for people with disabilities, and it comes as part of Nike’s wider efforts to make lacing easier for everybody.

One of the last releases of 2020 — The Air Jordan 11 Adapt will release December 30 through the SNKRS app, bringing a close to the 25th-anniversary celebrations and providing a look at the future for Jordan Brand. Expect it to be pricier than your typical AJ11 and to come in somewhere around $350.

Before this step into the future, the Air Jordan 11 “Jubilee” will drop December 12, also through SNKRS. Released early Wednesday night to select customers, the Jubilee is a brand new color scheme inspired by designer Tinker Hatfield’s original sketches. Silver detailing can be found throughout, including on the Jumpman logo and “23” embroidery on the heels. It’s basically the “Space Jam” version but with a metallic sheen fit for the shoe’s silver anniversary.