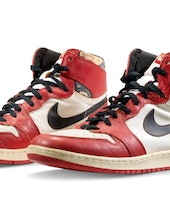 The total price of the sneakers including the buyer's premium.

A pair of Air Jordan 1s worn by Michael Jordan when he shattered a backboard have sold for $500,000. That's just shy of the $560,000 fetched another pair of game-worn, autographed Air Jordan 1s in May, setting the record for the most expensive sneakers ever sold. That pair was unique in that it was a "Mid" cut that never went on sale to the general public.

The latest high-priced Jordans came as part of Christie's auction in partnership with Stadium Goods. Including the buyer's premium, the Jordan 1s sold for total of $615,000. That's more than any other sneaker in the wide-ranging option, which included a pair of game worn "Pre-Jordan" Air Ships and several player exclusives from Jordan's career.

When Jordan broke glass — The outsole of these Air Jordan 1s still have a piece of glass embedded in them from when Jordan broke a backboard during a 1985 exhibition game in Trieste, Italy. Shockingly, it happened with a one-handed dunk — which probably says more about the strength, or lack thereof, of the hoop instead of Jordan.

This moment was the inspiration for the "Shattered Backboard" Air Jordan 1s released in 2015. The orange, black, and white color treatment was pulled from the uniforms of the Stefanel Trieste team Jordan played against and has become one of the most coveted pairs of Js that Jordan never played in. Five years later, pairs can sell for more than $2,000.

The auctioned pair came from Gianni Bertolitti, captain of Stefanel Trieste, who was given the shoes by Jordan. His Airness autographed both sneakers on the inner collars.

What else sold? — None of the other sneakers sold for nearly as much as the "Shattered Backboard" 1s, although Christie's hasn't listed the final price for the Air Ships. The next highest-selling auction was for a pair of Air Jordan 7s that Jordan wore during the gold medal game at the 1992 Summer Olympics. They sold for $112,500, including the buyer's premium, which seems like a steal considering the legend of the Dream Team.

A pair of game-worn Air Jordan 1 TYPS modified just for Jordan also sold for $62,500, while a pair of sample "Concord" Air Jordan 11s worn and signed by Jordan sold for $56,250. The cheapest sale was for a pair of Air Jordan 10 baseball cleat samples that were never worn and sold for $8,750.