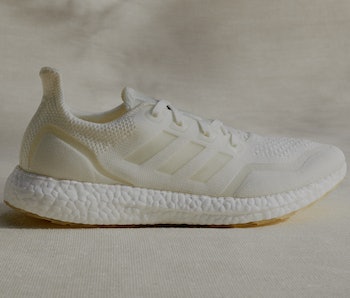 Adidas' first fully recyclable UltraBoost has moved past the beta phase and will get a wider launch to coincide with Earth Day.

Now dubbed the UltraBoost “Made to be Remade,” the sneaker will be the biggest step yet in Adidas' efforts to achieve a circular loop. Once the sneaker has reached the end of its lifespan, the wearer can return it to Adidas to be recycled and made into yet another shoe. A QR code appears prominently on the tongue to make the process of beginning the return simple.

Last year, Adidas released 1,500 pairs of the recyclable UltraBoost as a pilot program. Those chosen were then instructed to wear the sneaker for 21 weeks before returning it and giving feedback on its performance.

More on the Futurecraft program — Adidas seems to be shedding the “Futurecraft” name for its recyclable UltraBoost name, but it exists within the same paradigm as the series still in its infancy. Over the past two years, Adidas has given the “Futurecraft.Loop,” a unique sneaker, to select people on a temporary basis. Sneakers from the first loan were recycled into another batch, which were then given back out to be returned at a later date once again.

Other Futurecraft sneakers are due to release to the public this year and next, but it’ll be the UltraBoost “Made to Be Remade” that gets the first wide(r) release. The sneaker drops this Thursday, April 22, but only members of Adidas’ Creators Club will have the opportunity to purchase. Chances are the number of sneakers available will be fairly small, but any can sign up for the Creators Club here for free.

Just remember, the most sustainable thing you can do is to buy nothing.