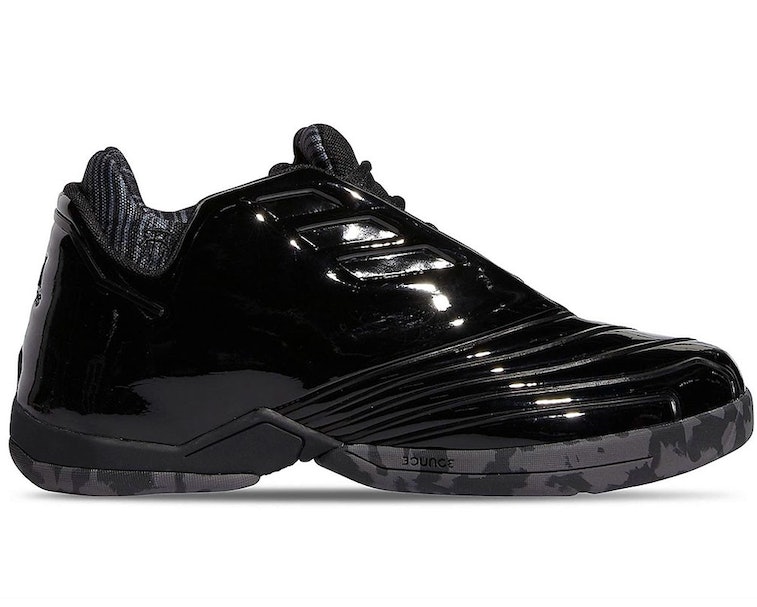 Adidas has spent the last year reviving Tracy McGrady’s signature sneaker line with more enthusiasm than we’ve ever seen. Youngins may not know it, but T-Mac was one of the most thrilling players to watch in the NBA throughout the early and mid-2000s, and he had the sneaker game to match. His most iconic kicks moment came when he wore mismatched blue and red versions of the T-Mac 3 for the 2004 NBA All-Star game, but his first three models are all certified classics.

The T-Mac 2, first revived earlier this year for its 20th anniversary, is getting a fetching all-black makeover. Just like the T-Mac 3 that followed it, McGrady’s second signature sneaker from Adidas features an upper fastened out of a single piece of patent leather. The unique shine that comes from the material usually reserved for dress shoes made the T-Mac 2 and T-Mac 3 some of the most dazzling sneakers on the court during the era. And now that the former is appearing in black, it bears an unmistakable resemblance to the Air Jordan 11 — one of the most heralded models of Air Jordans and the first basketball sneaker ever to make use of patent leather.

Out of all the basketball sneakers from the last 20 years, LeBron James’ and Kobe Bryant’s enjoy the lion’s share of attention today. It’s encouraging to see other players with comparatively under-sung legacies get some shine, as it’s important to recognize the complete history of kicks in the game if you’re truly going to be a sneaker scholar.

Behold the Restomod — Adidas has been giving its T-Macs what it’s calling the “Restomod” treatment, which involves preserving the original shapes while upgrading the technology they house. Gilbert Arenas’ underrated Gil Zero sneaker has also appeared under the Restomod banner, and Nike had been doing something similar with its Kobe Protro line until its contract with his estate expired.

The T-Mac 2 Restomod comes with a Bounce outsole and Torsion System midsole that’ll help it compare favorably on the court to more contemporary basketball sneakers. But even if you have no plans to hoop in them, the “Black Patent” variant is worth scooping up based on its appearance alone. Sneakerheads have been known to wear Air Jordan 11s in weddings, and this sneaker too could be an alternative to formal footwear.

T-Mac’s latest Restomod drops this Saturday, March 18, through Adidas’ website. And while demand shouldn’t be crazy enough to make it a difficult cop, select other retailers will also have stock to ensure your opportunity at a lesser-appreciated part of sneaker history.