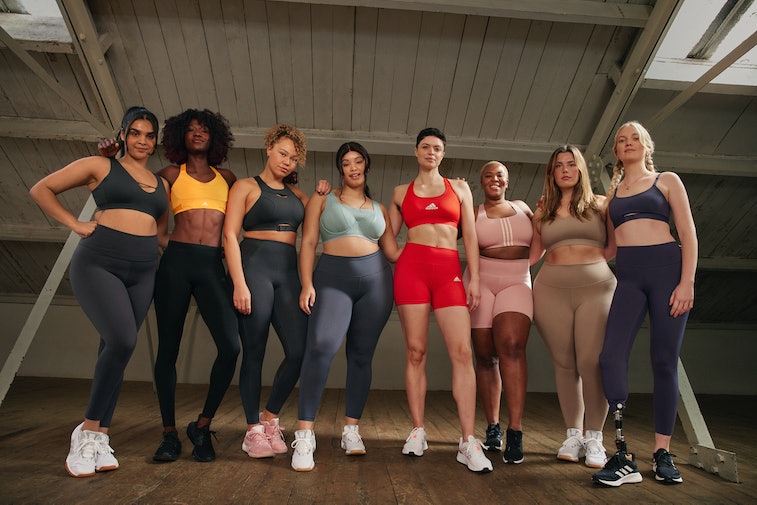 Adidas has unveiled an extensive collection of sports bras guaranteed to fit everyone — and to get people talking. The brand released a bold ad for its sportswear capsule featuring a photo of 25 different pairs of bare breasts, with a goal of illustrating body diversity.

“We believe women’s breasts in all shapes and sizes deserve support and comfort,” Adidas captioned its post on Twitter. “Which is why our new sports bra range contains 43 styles, so everyone can find the right fit for them.”

The brand’s ad, which does not censor the breasts in any way, incited both angry and approving remarks from social media users. One Twitter user shared, “This is major. Well done Adidas!” Another user, known only as “dmoney$,” threatened to report Adidas’ post in a bid to have it removed from the platform. The brand responded to the user’s tweet, writing: “It’s perfectly natural to have breasts. We are happy to celebrate that and won’t be taking this down so we can keep doing so.”

News flash — “It’s important to normalize the human body and help inspire future generations to feel confident and unashamed,” Adidas wrote in follow-up tweets. “We want future generations to feel body-confident, which is why this gallery is so important to share.” The brand also explained that it followed Twitter’s social media guidelines and would be further sharing the uncensored photos on its website and on billboards around the country — much to the delight and dismay of many.

Others noted how “unsacred” it was to lay eyes on women’s (allegedly God-made) breasts. Only a day prior to Adidas’ campaign release, Christian pastor Brian Sauvé — who has a Twitter account for a reason only God knows — wrote on the app: “Dear Ladies, There is no reason whatsoever for you to post pictures of yourself in low cut shirts, bikinis, bra and underwear, or anything similar — ever. Not to show your weight loss journey. Not to show your newborn baby. Not to document your birth story.”

According to Sauvé, an ad campaign doesn’t count as a reason either — and accordingly, Adidas responded to the pastor’s Tweet with its uncensored promotion. “Dear Brian, all bodies should be celebrated and supported, without shame or exception,” the brand added. It’s unclear whether Adidas’ campaign launched in rebuttal to Sauvé’s comment or as a mere coincidence. Either way, many applauded the brand for its subjectively sick burn.

Backed by boobies? — Provocative or not, depending on who you ask, the ad campaign seems to have turned people’s focus to breasts rather than inclusivity and sports bras. One Twitter user wrote: “I’m all for boobies and positivity but like … what [is Adidas] selling? Shouldn’t it at least show how [the brand’s] ‘body positive’ bras support all different kinds of boobies? Or is this just another shock ad designed only to generate revenue by using women’s bodies? exhausting.”

Adidas has not yet responded to the comment, but its campaign highlights just how the brand is supporting women — in all aspects of the word. At a closer look, its alluring ad shows the markings that sports bras can leave behind after being worn, bringing attention to the prolonged issues of sports bras’ fit and function (among other things). According to Adidas, breasts can experience the same G force as an F1 driver if not properly supported during running, and approximately 23.5 million women have skipped a workout all together because of a lack of confidence in their sports bra working properly or being uncomfortable.

“IS THIS JUST ANOTHER SHOCK AD... USING WOMEN’S BODIES?”

A bra for everyone — Working alongside a female-led design team and the University of Portsmouth, a leading breast biomechanics research institute, Adidas created a range of sports bras that deliver added comfort and better fit, enabling more athletes to participate in sport and experience the benefits it brings.

The collection of 43 sports bras is nearly as comprehensive as what activities people can do in them: Different designs support everything from lounging, yoga, pilates, HIIT classes, training, and running. Everyday bras from the capsule feature breathable fabric meant to feel like a second skin, as studio styles are designed to move with the body for soft support.

Stronger reinforcement can be found in Adidas’ training sports bras, which offer sleek coverage with stretchy and quick-drying fabrics to unlock the highest levels of performance for high-intensity workouts. Running bras lend the most support with moisture-wicking wrapping and flat seaming.

Adidas’ extensive sports bra collection is available worldwide on February 14 via its website, app, and in stores. Alongside the capsule, customers can also utilize an online bra fitting service to ensure they shop for their correct size. The tool provides a self-measurement tutorial and bra recommendations based on fit and activity, making sure you have all the support you need whether you’re running or running your mouth on social media.