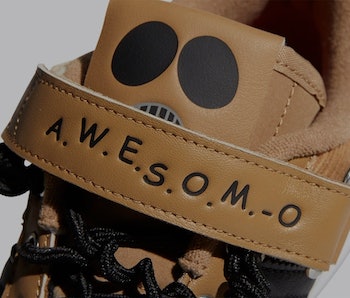 Adidas and South Park began partnering on collaborative sneakers last year, and 25 seasons and running for the animated show mean an abundance of source material for them to play with. The two parties started things off strong with a Towelie-themed Campus 80 timed for 4/20, and now they’re back with a hilarious one-off reference from back in season 8.

The Forum Low is taking on the appearance of Awesome-O, the crude robot disguise Cartman wore in an effort to dupe Butters into spilling his deepest secrets. The revelation that Butters is in possession of a video capturing Cartman dressed up as Britney Spears and making out with a Justin Timberlake cutout derails his plans and forces him to continue the ruse. While trying to find the tape, Cartman has to suffer the indignities of starvation and delivering a suppository for his master.

The brown sneaker paying homage to the episode comes out ugly, but accurately so in its depiction of the cardboard costume. Awesome-O’s face appears on the tongue, with his name spelled out just below across the tongue strap. Curly lace ends also call out Awesome-O’s exposed wiring, while metallic silver accents and a multi-color panel over the toe embody further details of the get-up.

This collaboration is low-key, well, awesome — Despite being far from the most hyped of Adidas’ creative partners, South Park is proving to inspire some pretty great kicks. The kickstarting Towelie sneaker set the bar high, and a subsequent "Professor Chaos" NMD R1 and now the Awesome-O Forum Low are having no problem matching it. Even the relatively plain “Stan Marsh” Stan Smith was solid, if only for the bridging of two Stans.

Fans of the Awesome-O Forum Low will be able to pick up the sneaker at 10 a.m. ET March 21 through the Adidas and Foot Locker websites. The $110 price tag makes it a relatively painless pick-up, and it even comes with a box depicting Cartman as Awesome-O and Butters as Professor Chaos.