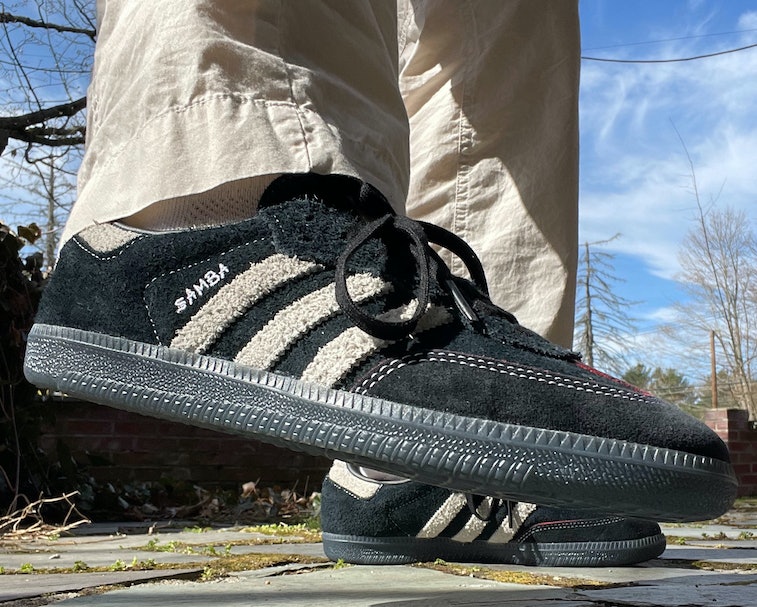 Adidas’ Samba ADV by Maite, designed by Belgian skateboarder Maité Steenhoudt, was crafted to celebrate women athletes and skaters — of which I am neither. Still, I think the updated silhouette is one of the best women’s exclusives to come so far this year.

The Samba model isn’t anything new — it’s been around since 1949 — and it certainly isn’t an in-demand silhouette like Nike’s Dunk or Air Jordan. Steenhoudt’s remix of the shoe gives it a fresh look though, and doesn’t tone the classic down to pink and beige shades usually seen on women’s exclusive. Instead, the sneaker boasts a hairy suede upper, translucent gum rubber sole, and red piping details, giving the shoe a functional and rugged look.

Dismantled details — Steenhoudt’s Samba joins a growing trend of weathered or worn-looking sneakers. Just look at Carpet Company’s pre-dirtied Dunk High, Nike’s tearaway Air Force 1, or Plessume’s yellowed Slam High bootleg sneaker, for example. What makes the worn Samba stand out from this crowd, though, is the fact that it’s a sneaker made by a woman, for women — and while the latter three pairs could all be worn by women, the chances of scoring a pair at retail price are slim.

With the sneaker world dominated by men, women are often sidelined: There’s a serious lack of women’s sizing in sneakers, an absence of female designers and collaborators (like Maité), and higher resale rates on smaller shoe sizes. Even women-exclusive designs are mediocre, generally sticking to pastel or neutral colors — as proven by a quick glance through Nike’s SNKRS. While Steenhoudt’s Samba certainly isn’t a vivid or outrageous design, it gives women the chance to join in on rugged and worn sneakers, deviating from the usual “prim and tidy” approach to women’s styles.

As functional as it is fashionable — Functional features, added by Steenhoudt to bolster her skating, only further separate the sneaker from the rest. A cup sole construction gives feet more support, translucent gum rubber soles enhance foot stability, and the shoe’s hairy suede upper makes it more durable. Like I said, I won’t be skating or sweating in these sneakers — but their practical additions make them so comfortable, almost as if the pair were molded to my feet. And as someone who likes to wear their sneakers, rather than tuck them away for safekeeping, the durability of the suede upper is a plus.

Steenhoudt’s more decorative details give the shoe a personal touch, too. Her handwriting appears on the sneakers’ lateral sides, with one foot reading “Maité” while the other reads “Samba.” A unique hidden red layer has also been added under the T-shaped toe, and gets exposed over time with wear — a feature that makes the shoe unique to the wearer and encourages beat-up kicks.

The Belgian skater has also added a hidden message to her skate crew — which owners of the Samba are now members of, in a way — that reads, “This Samba is made for dancing en veige.” After scouring the internet, I couldn’t find a translation for that last part, but I assume it’s something celebratory. Gold accents on the sock liner add to the message, nodding to Steenhoudt’s women role models — her mother and grandmother — with their names and birthdates.

Get you a sneaker that can do both — Adidas’ rugged Samba ADV was released in honor of International Women’s Month, but it celebrates women with more than just sappy notes and pastel hues. By giving women a sneaker that defies typical “feminine” design, and making it practical for sports and skate parks — places women are still fighting for representation — the brand is actually moving the sneaker game forward, rather than dumping a women’s exclusive model just for the occasion.

At $80, the silhouette is also accessible, and hasn’t been hyped up to extinction. Since the design varies so much for typical women’s designs, though, it’s sold out — unlike the other sneaker that dropped alongside it, which boasts a white and pastel purple base. Here, the sales speak for themselves.

With the women’s month behind us, though, we’re hoping Adidas (and other sneaker brands) keep up the energy. The only way to celebrate women is to make space for them in every aspect — not just light and delicate.