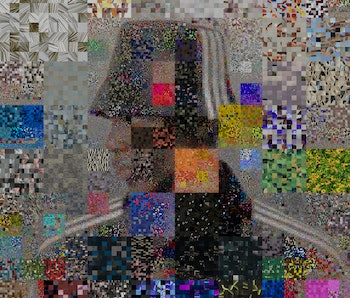 Prada and Adidas have unveiled their first collaborative NFT, a compilation of images crowd-sourced from 3,000 fans. Each person chosen was allowed to mint their own NFT featuring their photograph, and the final token proves that the sum isn’t always greater than its parts.

Digital artist Zach Lieberman designed the composite NFT, and by the looks of it he could have saved himself some time by plugging some 3,000 images into an online template. The distorted compilation forms a lookbook shot of a model in Prada and Adidas’ track jacket and bucket hat, and it looks like something Jostens would throw together to hang up in your school.

Fortunately, an appealing aesthetic doesn’t seem to be a prerequisite for success in NFTs — otherwise a bunch of unpleasant apes wouldn’t be worth so much money. The one-of-one token is now up for auction on SuperRare, with the bulk of the proceeds going towards climate-focused charities Slow Factory and UNESCO Sea Beyond. Those whose images help comprise the NFT will also get a split of the remaining spoils and will continue to draw from the profits on any secondary sales.

How did we get here? — Late last month, Prada and Adidas selected 3,000 fans to turn their own original images into an NFT that they’d mint as their own. 1,000 of those slots were reserved for owners of Adidas and Bored Ape Yacht Club’s tokens, the first foray into the metaverse for the former party, and another 500 were given to those who attempted to mint the NFT without success. The remaining 1,500 slots were then divvied up among users who registered their crypto wallet with Adidas for a chance to win.

The opportunity to create an original NFT should be lucrative, especially for those who didn’t need prior investment. Prada and Adidas allowed the users to mint the tokens for free, and the owners get to hold onto the intellectual property rights and can sell their NFTs at will. Add in whatever gains come from the composite NFT in its initial sale and beyond, and you’ve got a pretty sweet deal.

The biggest winners of all, however, are the users who submitted what appear to be low-effort webcam images — which you can make out if you zoom into the composite artwork. Someone may very well pay a small fortune down the line for what amounts to be an image of just some dude smiling, and that’s just hilarious and not at all a sign of how ridiculous this whole NFT phenomenon is.