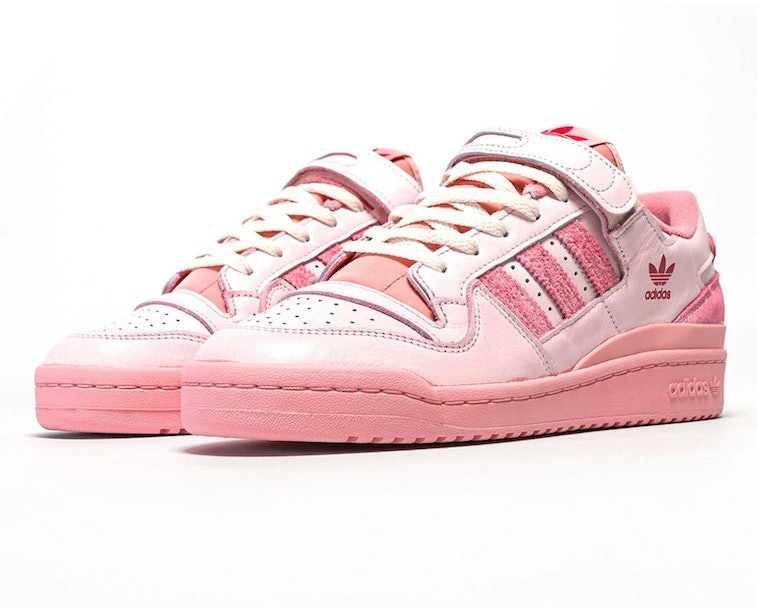 Adidas is offering a consolation prize to anyone who missed out on last year’s Forum Low partnership with Bad Bunny. The brand’s latest version of the sneaker, which arrives decked out in pink, looks incredibly similar to the “Easter Egg” collaboration originally released last April.

Much like Benito’s version, a darker pink dresses the sneaker’s shaggy suede Three Stripes and heel tab as a lighter shade covers its leather upper. A coral color — seemingly identical to the one seen on the “Easter Egg” version — decorates the shoe’s chunky rubber mudguard and sole unit. The only details missing from the Forum Low are Bad Bunny’s signature buckle and “Ojo” (eye) graphic, which here are replaced by Adidas’s classic Trefoil branding.

Take what you can get — Bad Bunny’s Forums have easily become Adidas’s biggest sneakers of the year, and resale prices prove it: His initial “First Café” pair is reselling for nearly $1,600, while the pink “Easter Egg” version resells for over $800. According to StockX, Benito’s low-top sneakers have become the most coveted non-Yeezy Adidas sneaker in the reselling site’s history.

For context, the collaborative sneakers typically retail for $160, but Benito’s huge fanbase — and resellers eager to profit off their demand — make the shoes extremely difficult to get ahold of. At the time of their release, making your own pair was easier than grabbing a real one. If you missed out on the “Easter Egg” Forum, or (perhaps justifiably) keep your existing pair in a glass box, Adidas’s pink Forum makes for a great alternative.

You can pick up a pair for $130, which in comparison to resale prices, seems like a steal. Retailers like Up There have the pink Forum Lows available but only in larger men’s sizes, leaving Bad Bunny fans with smaller feet alienated — at least for now. Adidas often caters to those who missed out on larger drops with restocks and lookalike kicks, meaning this rosy pair could appear on the brand’s website soon. With Bad Bunny’s new album out, we all deserve to have some pink Forums to perrear in.