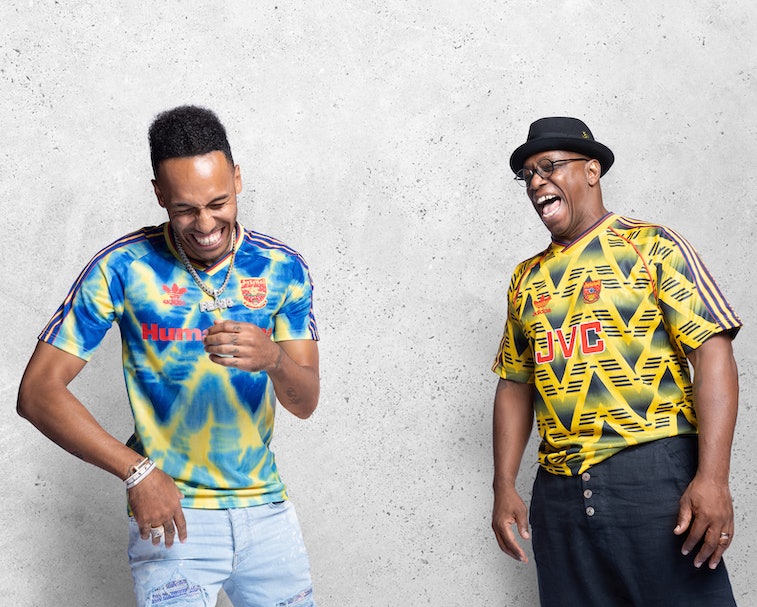 After letting Palace redesign the Juventus kit in a landmark collaboration, Adidas gave Pharrell the reins to design the uniforms for five of the world's top soccer clubs. Once again, Juventus has a colorful new kit to rock on the pitch, with Arsenal, Bayern Munich, Manchester United, and Real Madrid getting in on the fun.

The collaboration comes under Pharrell's Human Made line for Adidas, and all of the details have been made with a hand-painted effect, including the clubs' crests, sponsors, and the Adidas logo. All five jerseys will be worn by their respective clubs this weekend, with the exception of Bayern, which will don its kits in its next domestic club knockout game. Each is available now through Adidas and the clubs' own webstores.

Arsenal's shirt takes inspiration from its iconic "bruised banana" kit from 1991 to 1993 and has been redone to look hand painted with a bled out effect. It's a call back to not only when soccer kits were a lot more fun, but when Arsenal was coming off a domestic cup double.

The Munich jersey looks back to the club's kit from the exact same years that featured three massive stripes on the left shoulder. Pharrell's remix is the most muted of the collection, but the stripes get an acrylic paint update on top of a red shirt with the occasional white splotch.

The Juventus design looks to a shirt from more recent memory, the distinctive pink worn for the 2015-16 season that was the club's first with Adidas. Here, the color is washed out around the sponsor logo and replaces the black sleeve stripes with a darker pink that's less structured and tie-dye like stripe running across the chest.

Pharrell looked back to Man U's beloved snowflake print worn in away games from 1990 to 1992. The original design was born out of Manchester's house scene, and now it's been recreated using tie-dye for another counterculture spin.

Yohji Yamamoto designed a black kit for Real Madrid in 2014 that featured a dragon intended to represent glory, honor, greatness, and speed. Pharrell has brought back the mythical creature using water colors for a more hazy effect.