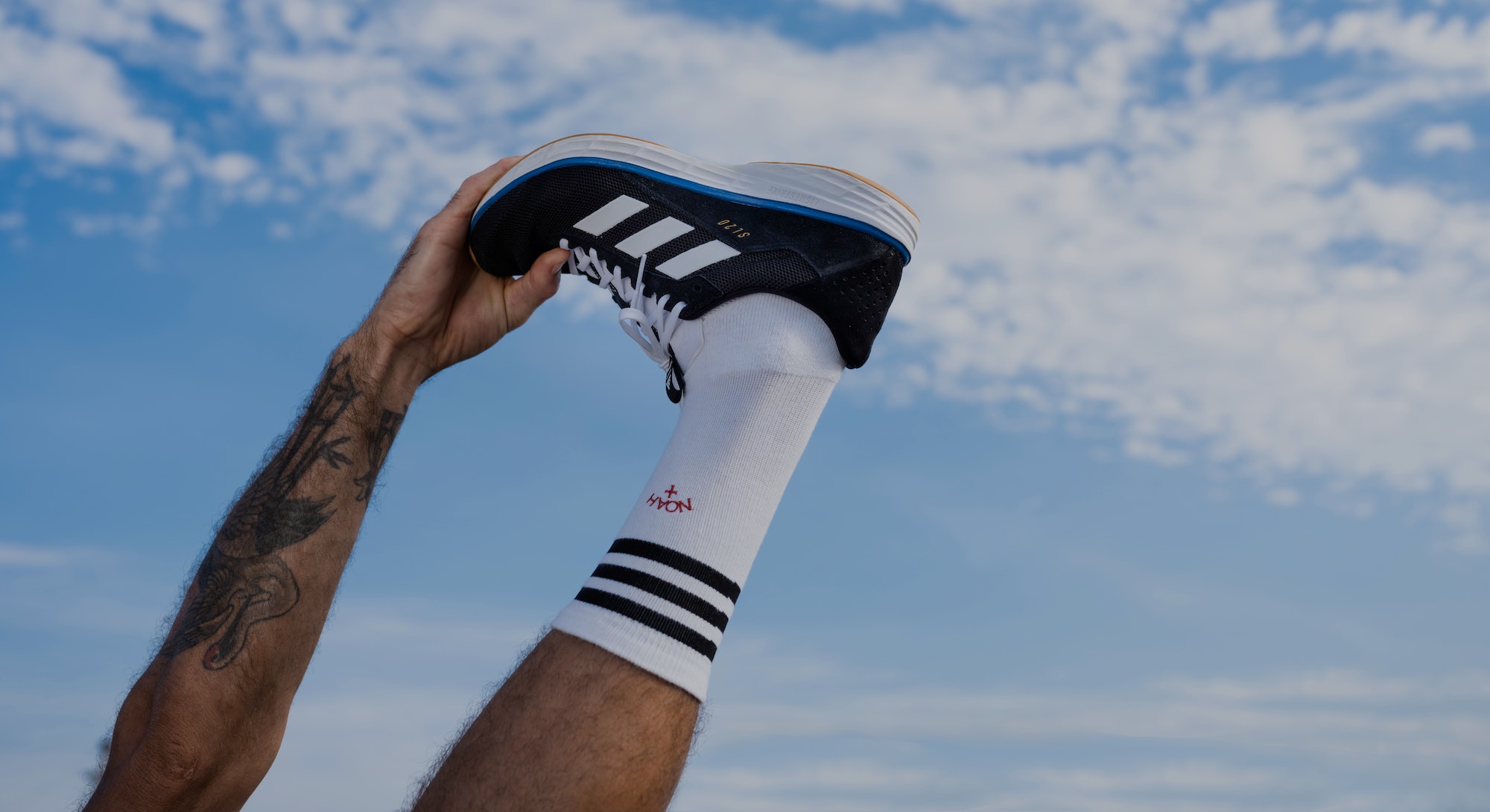 Collaborating with a sneaker giant like Adidas often constitutes a coming out party for a nascent brand. But for Noah, which is well established as a source for high quality menswear adjacent to street culture, it’s just another chance to expand its message.

Make quality product, spread awareness for the issues that the brand cares about most, and encourage purchasing only if you really love it — that’s Noah’s ethos, and its first collaboration with Adidas serves as an extension of it.

The two brands have partnered on a capsule made in large part from Adidas’ PrimeBlue material, which comes from recycled ocean plastic. It’s largely inspired by two loves of Noah founder Brandon Babenzien: running and beaches, specifically the ones where he grew up in Long Island.

“I know intellectually that it’s a big deal,” Babenzien says of the collaboration. “But we’re not really thinking of it like that. We don’t try to do the hottest sneaker on the market. We do what we like, and usually what we like is the unsung hero.”

Headlining the collection is a set of running sneakers, consisting of the SL72 and SL20. First debuted at the 1972 Summer Olympics, the SL72 was once a state-of-the-art running shoe that’s been adopted today as more of a lifestyle sneaker. More suitable for running is the SL20, an updated version of the silhouette launched this year. Under Noah’s stead, both sneakers will drop with a blue and green upper that evokes the ocean as well as in black.

“We don’t try to do the hottest sneaker on the market.”

The accompanying apparel — made up of a french terry sweatshirt, windbreaker, T-shirt, shorts, socks, and cap — also feature 30 percent recycled materials. Rounding out the collection, which launches on August 27, is a drawstring backpack.

The collection takes on the same retro, low-frills aesthetic of Noah’s in-house athletic gear. 100 percent recycled polyester shorts (also available in madras) feature wide stripes from the ‘70s, while the T-shirt looks less like the sweat-wicking, stretchable tops of today and more like any old tee. Completing the look is a set of striped crew socks straight out of a gym class from decade’s past.

“I’m not a technical person,” Babenzein told Input in an interview. “My shoes are the most technical thing I own because there’s no way around that. After that, I run in really basic stuff. And what we did was marry that with technical stuff like recycled nylons and polyesters, but it all feels regular. It doesn’t feel high-tech. There are a lot of people I meet who say they don’t want that stuff unless they’re racing.”

“We’re not big enough to develop this technology, and Adidas is.”

Another through-line for the sneakers and apparel is a scallop shell, a signal of the shellfishing industry in Long Island that’s been devastated by global warming. When fishermen went out for the yearly harvest last October in Peconic Bay, they found that the vast majority scallops were already dead. But beyond the impact close to home, Babenzein sees it as a symbol for all the issues caused by the ocean warming.

Babenzien was at the United Nations event in 2015 when Adidas unveiled its first shoe made of recycled ocean plastic in conjunction with Parley. He says the breakthrough has stuck with him to this day and that partnering with Adidas also provided the opportunity to work with one of his favorite brands from his childhood. “I’m excited that we got the opportunity to mess with this stuff,” Babenzein says. “We’re not big enough to develop this technology, and Adidas is.”

“One of the things I’ve learned recently is that big companies aren’t all bad.”

The Adidas collaboration comes just weeks after Noah announced it would be stocked at Nordstrom with a range of exclusive apparel. It was a surprising move for a brand that has prided itself on being small and subverting industry norms by speaking out about social and environmental issues, being remarkably transparent about its practices, and encouraging responsible consumption from the jump.

“One of the things I’ve learned recently is that big companies aren’t all bad,” Babenzien says. “It’s just like people — we’re not all good or bad. They’ve been demonized, and in most cases with like big banks or whatever, they should be demonized. But I’m trying to open my mind to this idea that if we can get in the room with some of these guys, we can push the change even further.”

Coming in the context of a pandemic that’s wreaked havoc on the retail industry, both partnerships are also an encouraging sign for the continued future of Noah. While labels and stores are being forced to shutter, Noah is still finding room to grow. And that’s especially reassuring when it involves a brand that continues to spark critical conversations with its clothing. For as cool as its clothes are, the best thing about Noah is what it has to say.