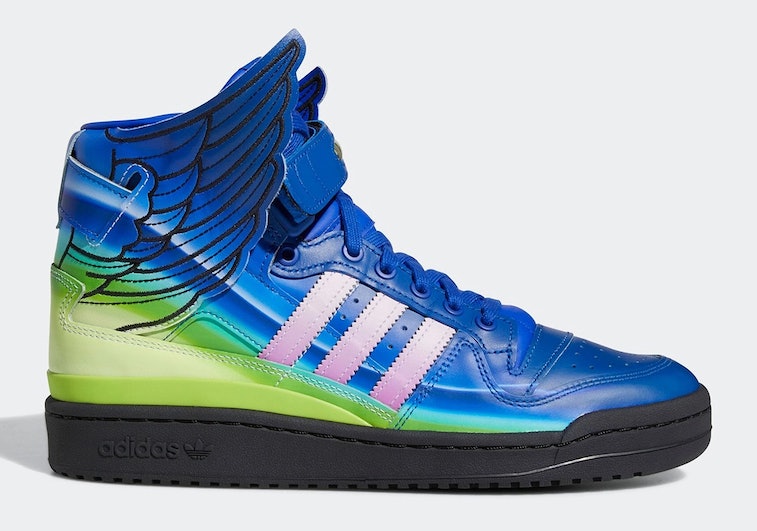 In a sneaker world obsessed with Yeezys and Nike Dunks, Jeremy Scott’s Adidas line offers a refreshing playfulness: The designer’s work is known for its vibrant colors, weird textures, and random add-ons like stuffed teddy bear heads and wings. Scott’s latest creation, however, has us wishing for less maximalism.

Adidas has unveiled a gradient version of Scott’s Forum Wings 4.0 sneaker, which debuted back in December in an all-white palette. The footwear takes clear inspiration from the designer’s original Wings line, reversing a set of wings on the shoe’s collar so that their tip points towards the toe rather than away. Subtle, yet still statement-making, the sneaker isn’t bad — but its new color scheme is too much.

Fly away — The previous, tonal iteration of the Forum Wings 4.0 allowed wearers to focus on its namesake, outlined in stark black. But the addition of a royal blue color — which streakily transitions from light blue to white to green by the mid-foot and heel — makes it seem as though all aspects of the shoe are fighting for attention. It’s hard to appreciate Scott’s signature Wings, or the Three Stripes logos that gradient from white to lavender.

Scott always goes big, but his latest sneakers cross the line between maximalism and overdone. Unlike his previous money-printed kicks or teddy bear slides, the gradient Forum Wings 4.0 doesn’t seem to know when to stop. Had the design been more simple — perhaps doing away with the gradient in favor of a solid color — other details on the shoe could be more of a highlight than a hindsight.

At the ankle straps, Scott has added Adidas-branded bubbles, filled in with yellow backdrops and blue font. The retro motif pairs nicely with Adidas’ Trefoil logo on the tongue, done up in a fluorescent pink color. Each detail is reminiscent of the ‘80s — the era that first welcomed Adidas’ Forum sneaker — but becomes overlooked when placed next to multiple gradients and a huge wing. Still, there’s hope that Scott might release multiple color schemes of the sneaker, preferably simpler ones.

Coming next month — All in all, the designer is creating sneakers unlike anyone else out there — so if you’re tired of two-tone Dunks or just love doing the most, mark your calendar for a March 23 release on Adidas’ Confirmed app. In line with Scott’s last Forums, the Forum Wings 4.0 will retail for $180, so be prepared to cough up some serious cash for sneakers that are anything but.