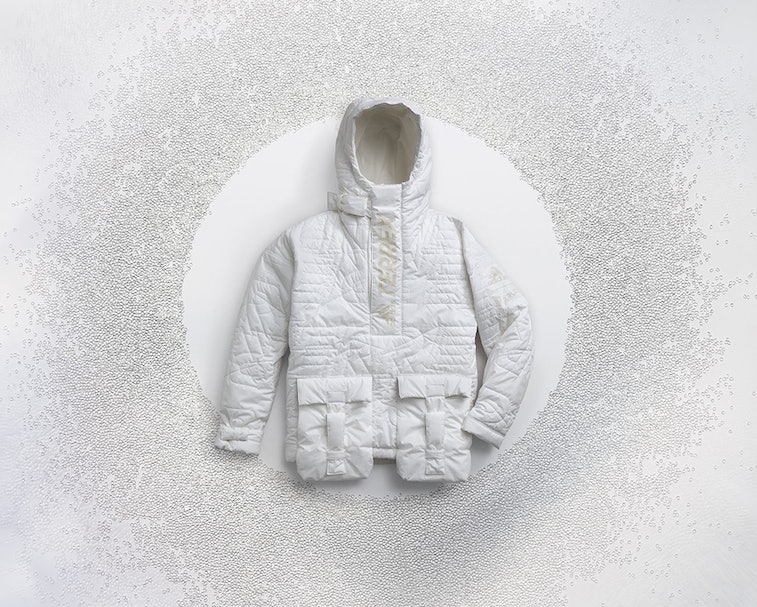 Through its Futurecraft.Loop line of sneakers, Adidas is making inroads on truly circular and thus more sustainable sneaker design. After going through a pilot program, Adidas released a fully recyclable UltraBoost this week that marks the widest availability yet for its sneakers that are designed to be returned eventually and made into a whole ‘nother pair.

Now, Adidas is ready to reveal that it isn’t stopping at footwear. The Futurecraft.Loop anorak is made entirely from a single type of recycled plastic, from the exterior to the insulation and even including the yarn. Without using any dye, the jacket shows the natural color of recycled polyester — and all the branding is done using laser cutting to avoid any waste. And just like the sneakers, it can be recycled into a brand new jacket once the original reaches the end of its lifespan.

“There are about 100 parts in a normal jacket, and the complexity is immense,” Birgit Freundorfer, design director for Adidas Outdoor, told Highsnobiety. “We asked ourselves how can we reduce this complexity by going mono-material and without adding any additional trims? We used the same inner and outer material, the padding is also made from 100-percent recycled materials for ease of recycling without deconstruction.”

Futurecraft.Loop could be a game-changer — While still a drop in the hat compared to Adidas’ wider output, Futurecraft.Loop is showing signs of promise for a more sustainable future. The brand’s first pair of fully recyclable sneakers were given out to select people in 2019, with the caveat that they must be returned. That first crop of shoes was then broken down and remade into new pairs, which were then put back into the world with the same instructions for return.

A Futurecraft.Loop Ultraboost was also given out last year to 1,500 people who were allowed to wear them for 21 weeks and were asked to give their performance feedback upon sending the shoes back. Presumably, those findings influenced the “Made to Be Remade” Ultraboost, which this week became Adidas’ first product of its kind to go on sale to the public.

“I feel as an apparel industry, we need to clean up our own products and not depend on recycled plastic bottles only,” Freundorfer said. “I think that's a really good first approach, don't get me wrong, but what can we do with our own products?”

You may have to change your idea of ownership — Freundorfer told Highsnobiety Adidas expects to release its recyclable anorak in summer 2022, and it’s still figuring out if the brand will opt for a subscription service or rental program. Either way, you may be purchasing a jacket with the stipulation that you must one day return it — an impermanence that may just be the future of sustainable clothing.