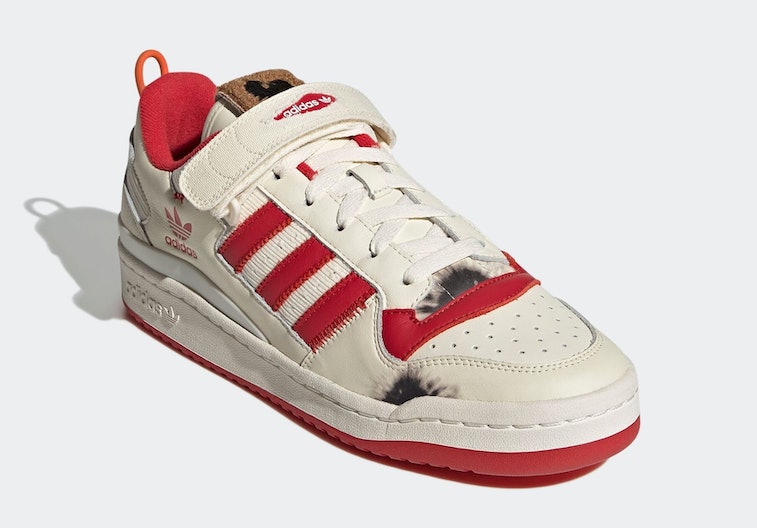 Ahead of the holiday season, Adidas has decorated its Forum sneaker with references from the classic Christmas movie Home Alone. Channeling Kevin McCallister’s on-screen kicks — which were, in fact, a pair of Three Stripes — the shoe flaunts shades of red and white similar to those seen in the 1990 movie.

Official imagery of the thematic sneaker surfaced this week despite no proper announcement from Adidas, indicating that a release is imminent. Already, people are shopping for the holidays early, not wanting to leave anything (or anyone) behind.

Packed with detail — Directly referencing Kevin’s own Forums, Adidas’ upcoming sneakers feature a cream base with red accents hitting the outsole, eyelets, Three Stripes, collar, and ankle strap branding. A red house on the lateral side of the left shoe nods to the one seen in Home Alone’s title, while miscellaneous red stitching makes it look like the sneakers have survived Kevin’s shenanigans throughout the film.

Burn marks near the front of the Forum reference Kevin’s fiery defense plan against Harry and Marv — AKA the Wet Bandits — which luckily enough, didn’t “burn down the joint,” as McCallister puts it. Graphic insoles offer a better look into the thieves’ adventure, bearing photos of Harry and Marv caught up in Kevin’s traps of shaving cream and television trickery.

Various versions of the insoles, as well as removable dubraes, help wearers customize their Home Alone kicks. An iron, maintenance van, fire extinguisher, fan, broken ornament, and can of paint can adorn the shoe’s laces, depending on which of Kevin’s plans the wearer decides to execute — or hopefully, just don in spirit. Tiny metallic “M” charms sit on the heel — perhaps as a further tribute to McCallister (or his actor, Macaulay Culkin) — as co-branded chenille tongue tags, inspired by the rugs in the film, finish off the thematic Forums.

‘Tis the season — Adidas has yet to announce the shoes, although a release date should arrive by November or December. As of now, the Home Alone Forums are set to retail for $110. Make sure to prepare for the sneakers’ arrival by finding the perfect ugly holiday sweater to pair them with.