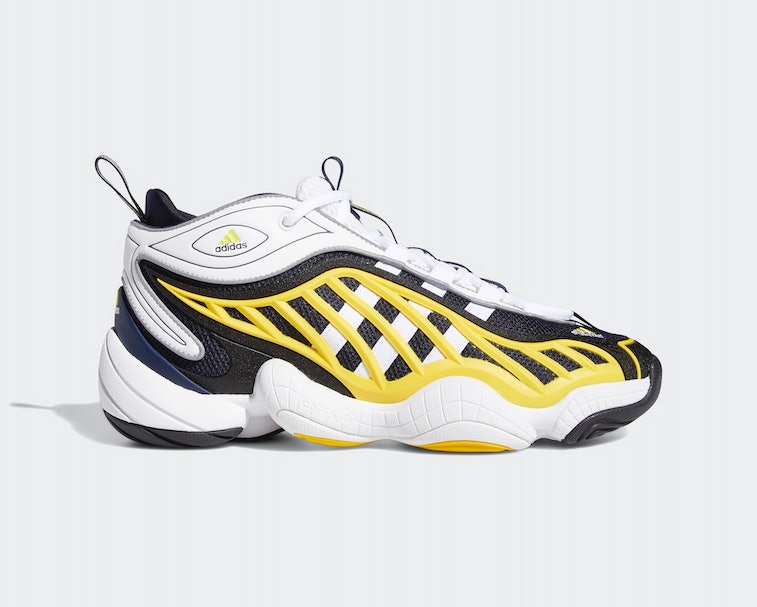 As chunky sneakers and '90s design cues become en vogue again, Adidas has had plenty to pull from its FYW line. Feet You Wear technology debuted in 1996 and is designed to mimic the natural curves and shapes of our feet. Frampton Ellis, an outside inventor, came up with the idea for a sneaker that would prevent ankle rolls and provide better stability overall.

The timing couldn't have been better for Adidas, as it had signed Kobe Bryant before he was even drafted. Bryant wore several Adidas models during his rookie year, including the EQT Elevation, one of the first Adidas shoes to feature FYW tech. That shoe would provide the basis of Bryant's first two signature models with Adidas, the KB8 and KB8 II, which have since been re-released as the Crazy 8 and Crazy 2.

Another basketball shoe to come from the FYW era, which ceased in 2001 because of licensing issues with Ellis, is the Intimidation. The caged basketball sneaker has been largely forgotten, but its most enduring legacy is in inspiring the Yeezy Boost 500. Now, it'll make its return for the first time — and in an environment that may just appreciate it more.

Look to the sole — The Intimidation's rubber cup sole unit is the very same as the one in the Yeezy Boost 500. West took the same shape and pressure points, updating them with Boost cushioning for an even more comfortable stride. With the benefit of hindsight, its modular sole and bubbly upper isn't nearly as weird as some of West's most recent creations, but it was a strange sight nonetheless when it debuted in 2017.

Adidas has also applied Boost to FYW shapes in its Crazy BYW (Boost You Wear) series — which is an underrated silhouette in my opinion — but the Intimidation opts for adiPRENE+ cushioning instead. TPU caging covers a mesh upper, while synthetic leather gives the shoe more strength in the support and collar. For its initial revival, the Intimidation arrives in a "Collegiate Navy" and "Wonder Glow" yellow that invokes the University of Michigan. But the most important detail of all is the return of the "Freddy" foot logo, which appears on the insole.

A no-fuss purchase you can get right now — The Adidas Intimidation has made its return without much fanfare and is available now through Adidas' site for $130. Most sizes are still available, making this a hype-free cop that should be coveted nonetheless. It's a relief when a worthy sneaker flies under the radar, so pick these up as a sweet escape from the hysteria that plagues this world of ours.