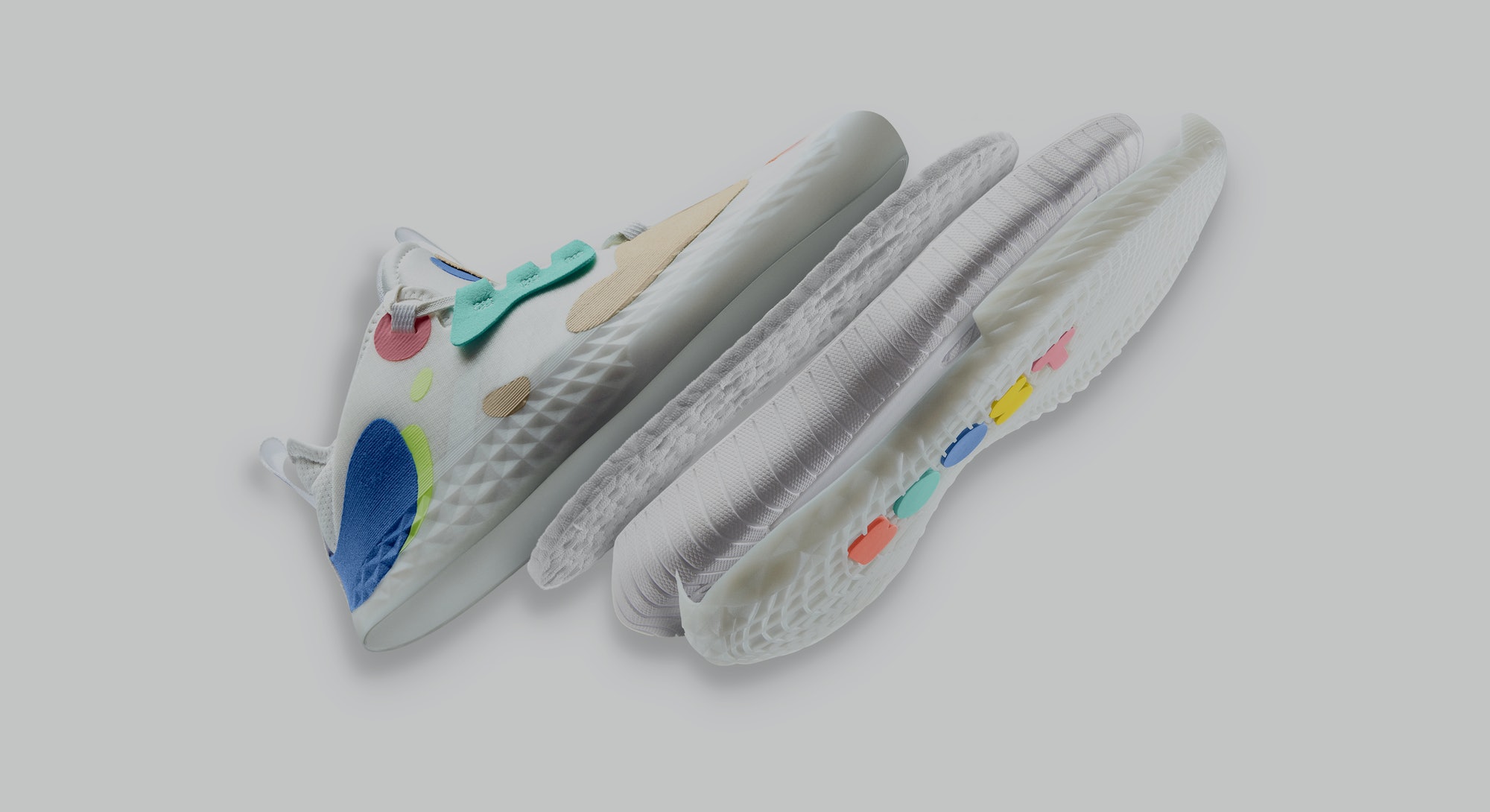 The Harden Vol. 5 marks a breakthrough not just for James Harden's line of signature sneakers, but for Adidas as a whole. Using a new design process called "Futurenatural," Harden's fifth signature shoe completely changes how sneakers are made.

The upper and midsole have been forged together using heat and extreme pressure coming from all angles, creating a sneaker that consists of just one final piece. This unique process not only differs in how the sneaker is constructed, but in how it ultimately fits. A more anatomical approach to the shoe's last, or mold, has been made possible because of the application of heat and pressure, with the shape informed by data from thousands of scans of basketball players' feet around the world.

A combination of Boost and Lightstrike cushioning, the latter of which features in the Adizero Adios Pro that was worn in the new record run for a half-marathon, joins with Futurenatural in allowing for a free range of motion. Harden's sudden cuts and stops made his style of play the ideal application for Adidas' new technology — a now rare instance in which basketball leads the company forward.

To discuss what makes the Harden Vol. 5 and Futurenatural special, Input spoke with Rashad Williams, senior director of footwear for Adidas Hoops.

Input: In the simplest of terms, what is Futurenatural?

Williams: Futurenatural all started around our goal to improve fit for the consumer and the athlete. If you think about it in basic terms, everyone needs a shoe that fits well, especially someone like James Harden. The fit needs to be great for a kid who wants to play all day on the blacktop or for James, who plays 48 minutes at the best of his ability in an NBA game.

So we broke it down by looking at the way shoes are made. If you know anything about shoes, the blueprint or foundation is a last, where the upper and the shape of the shoe is formed. We scanned over thousands of feet around the globe of basketball players and consumers to land at this great new kind of anatomical fit, like the best human foot shape we could. And that's when we start to dig down into how we build a shoe that fits this anatomical last.

That led us to working with one of our factory partners on machines that could create a shoe that fits on this last, and that's where Futurenatural is born. Futurenatural is our method of making a better anatomically fitting shoe.

“The technology gave us a great canvas where we can start to play with different overlays and different color blocking.”

How does this differ from how lasts were previously used?

Typically, in the entire shoe industry, the shape of a last hasn't changed for like hundreds as you know. Great cobblers in Italy created what they thought the shape of a shoe should be, and it literally hasn't changed at all within all companies. So we now have foot scans and shapes of athletes' feet. We already had Hardens' feet and other athletes' mold, but no one has really tried to be specific in creating an anatomical last.

What are the benefits of using pressure and heat for construction instead of other processes?

It gives us the ability to mold the upper in different places. It gives us the ability to have different types of surfaces where you may need it best, whether it's the ankle, midfoot, or forefoot. But then it also gives us the stability to create a seamless upper. We can literally have one piece of material. Once it's in the machine, the heat and pressure can mold it to our specifications. Then all we have to do is add our rubber outsole and traction. We can shape the shoe a lot better to hug the foot.

How do Boost and Lightstrike come into play after that?

The fit was our goal, but the stepping comfort has to be there, too. An athlete wants a great ride. I'll say Boost is the most comfortable foam out there. You feel Boost and you know what it is. Then what we did is we coupled it with Lightstrike. Lightstrike gives you this great responsiveness.

What we found with [Harden], his whole game is based off of the freedom of movement of his ankle, so we really tried to give him the ability there. That's one of the best things about working with Lightstrike. It's super light, but it gives you the responsiveness.

When you talk about an anatomical shoe, you've gotta bring up Feet You Wear and Boost You Wear. How has that technology impacted this shoe?

This is definitely something off of that tree. When we sit with our innovation team, that's always something that comes up because it was some of the most innovative stuff we did around natural motion and how athletes can perform better. And then there's the aesthetic that it gave because you had all these radiuses on the midsole and outsole. We definitely wanted to take some inspiration from there to build this shoe.

Are there any plans to apply Futurenatural outside of basketball?

I think that's one of the things that brands are always looking to do, but people are excited that basketball is taking the lead on Futurenatural. Traditionally, it's the other way around with running or something like that first. But we're really excited about what it can offer.

What was the process like working with Harden and bringing him in on this new technology?

With Futurenatural, it took a little longer than usual because we had to get the method of making together and ensure that it could hold up to [Harden's] standards. In previous models, he's worn Boost and Lightstrike. He was familiar with both of those foams, and then we gave him the opportunity with Futurenatural to give him a better sculpt and better fitting shoe. He was all for it. And the way the aesthetics are, this is the most uniquely James shoe we've had to date.

A lot of focus has been on the tech, and rightly so, but what's informed the aesthetics?

The technology gave us a great canvas where we can start to play with different overlays and different color blocking, but it was mainly James. Once we start rolling out some of these stories and giving more insight on the colorways, you'll find out. You'll see different callouts to his family, his friends, and his community.

Has the pandemic affected the design process for this shoe?

Traditionally, we have more face time — or should I say physical time? This time we had a lot more FaceTime, but before COVID hit we did have a lot of time with him. We work 18 to 24 months out in advance, so we did have time for our team to fly out to Houston and meet with James. He was gracious enough to have us meet at his house a lot.

He would come straight from practice, and then we could have our meetings, which was great because he could tell us how his feet were feeling, how his recovery was right after practice or a game. Our time with him was pretty substantial, but as you know, once COVID hit we got a lot more FaceTime than physical time.

And how did it effect the work within your team?

It's been challenging because it's been a lot of video. As changes and tweaks happened, we had to look at them on a screen or trust what the teams were doing. But for the most part with Futurenatural, we were probably around 90 or 95 percent done before COVID hit.