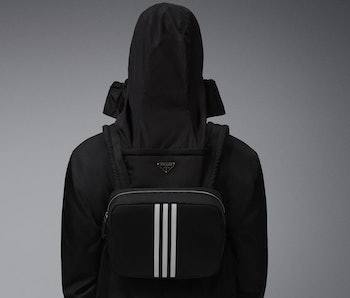 After making its debut NFT late last year, Adidas is continuing its expedition into the metaverse with Prada as a new partner.

The two collaborators, who first joined forces in 2019, are launching a campaign to create user-generated NFTs in a project called “Adidas for Prada Re-Source.” 3,000 fans will be selected to create and mint their own unique tokens using original and anonymized photographs. Each of these images will then be compiled by digital artist and coder Zach Lieberman into a composite NFT that’ll be auctioned for charity.

If you’re selected to create your own NFT, you’ll be able to do so at no cost using Polygon technology. The web3 campaign marks Adidas’ second NFT release, the first being a multi-pronged collaboration including Bored Ape Yacht Club, while it’ll be the very first NFT for Prada.

Who can get involved? — The Re-Source NFT campaign will be one of the first perks for owners of Adidas and Bored Ape Yacht Club’s tokens, which were released late last year. 1,000 spots are reserved for holders of Adidas' first NFT, with an additional 500 slots reserved for those who attempted to mint the tokens without success. If you’re not in either camp, you can register your digital wallet with Adidas beginning January 24 for a shot at one of the remaining 1,500 spots.

Once those who’ve been chosen to participate are finalized, users will be invited to return to Adidas’ site on January 26 and 27 to put their photograph through a filter by Lieberman to create their NFT. Each person who creates their own NFT will maintain full intellectual property rights and will be able to sell their token on the secondary market.

Lieberman’s composite NFT featuring all 3,000 images will go up for auction on the digital marketplace SuperRare from January 28 through 31. A majority of the proceeds will go to Slow Factory, a non-profit that educates marginalized communities in climate change innovations. Each of the 3,000 NFT creators will also receive a split of the profits — providing two sources of revenue with no cost of entry.

For some, this project will print absolutely free money, helping to snuff out the feeling of the grift that permeates throughout the metaverse.