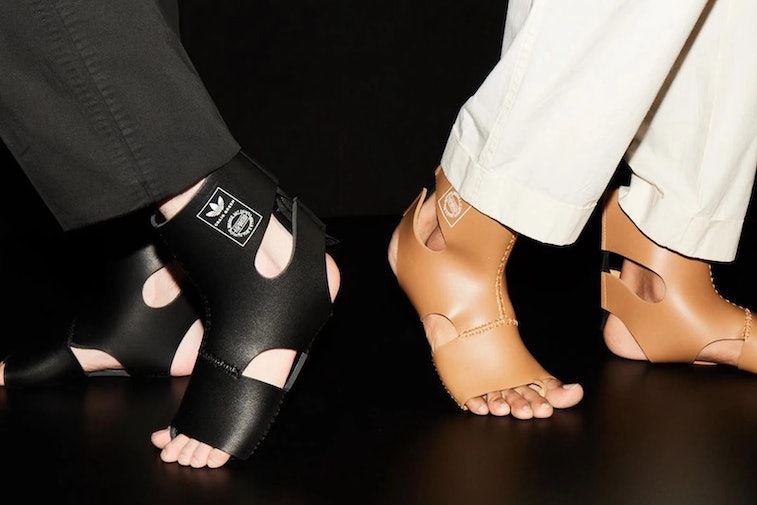 With Paris Fashion Week in full swing, designers are busy unveiling their best — and most experimental — ideas. So far, we’ve seen Comme de Garçons’ Nike Foamposite, Virgil Abloh’s Louis Vuitton Nike Foamposite, and Demi Moore for some reason (not wearing Foamposites). Amidst this chaos is British designer Craig Green, who decided it was time to make headlines with some footwear of his own. He shared his latest collaborative work with Adidas on Instagram, failing to describe what he had posted in his caption. The piece, which is part of the designer’s SS21 collection, looks more like a foot brace than a luxury shoe.

Green’s experimental shoe — if you can even call it that — features openings at the toes, midfoot, heel, and ankle. We’re not sure how it fits into Adidas’ catalog. Hypebeast is rightfully calling the piece an “orthopedic boot,” citing the silhouette’s uncanny resemblance to an ankle brace. Could this be Adidas’ attempt at luxury support?

Brace yourself — Green’s open-toed footwear comes in black, white, or tan leather, featuring heavily visible stitching that runs across the toe area and up the top of the shoe. Adidas and Green co-branded details can be found on the upper part of the ankle. For easy access into this leather foot cage, a chunky zipper can be found at the heel.

And as orthopedic as the shoe looks, it might not be supportive at all. Thanks to the piece’s gladiator-like construction, it has a completely flat bottom, giving your foot no ankle support. Not to mention, the entire shoe is made of leather with no additional boning or structure.

With openings by the toes and heel, we’re not sure where you would don a pair of these leather foot-sleeves, other than maybe a Hercules screening. Their construction makes them utterly useless, but of course, that’s beside the point — this is fashion.

Freaky footwear — Adidas is well aware of this fact, and these shoes only speak to the brand’s trust in its collaborators. The company has seen plenty of weird designs from its partners, ranging from Kanye West’s Yeezy to OAMC. This leather brace, however, definitely surpasses past oddities.

We don’t expect to see Green’s orthopedic boot trending on StockX, and not just because it isn’t a Yeezy Boost 350 V2. For now, the Craig Green x Adidas sandal is just a concept, with no actual plan to put these into production. With a few leather scraps, though, you could probably recreate them — but why bother?