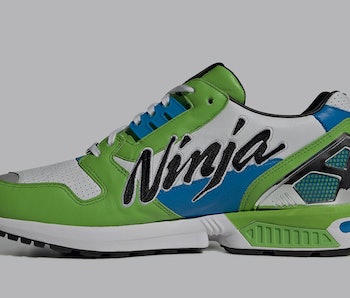 Adidas is bringing motorcycles into its ever-increasing list of collaborators as the Kawasaki Ninja informs two pairs of sneakers from the ZX line.

The ZX 8000 is every bit as exhilarating as Kawasaki’s iconic sportbike by combining electric blue with the motorcycle’s signature shade of neon green. Replacing the stripes on the sneaker’s lateral side is the can’t-miss “Ninja” logo, and perhaps the best detail of all is a chrome cage on the heel to invoke wheels.

A much more tame ZX 5K Boost will also arrive in black while maintaining similar chrome accenting. Adidas’ Three Stripes are left alone this time, while the Ninja logo is tucked into a rubber panel near the lateral side’s toe. The green detailing is also kept to a minimum, and if you look into the semi-translucent midsole you can make out an aggressive shark tooth pattern.

Don’t forget your license plate — One of the best details on both Kawasaki ZX sneakers is also the easiest to customize. The ZX 8000 and ZX 5K Boost come with their own sets of swappable lace dubraes with a metallic finish invoking license plates. “ZX” and “Torsion” branding is applied across each mismatched set — the latter of which calls out the technology Adidas debuted on the ZX 8000 back in 1998.

The Torsion system sees a built-in arch from heel to toe designed to provide support as a twisting motion is applied. Throughout the ‘90s, the ZX line featuring the tech would become popular throughout the U.K.’s rave scene, to which the Ninja’s bold colors provide a solid through-line.

Adidas and Kawasaki’s first collaboration is slated to release October 23 through the former’s website, with pricing yet to be announced. Because we’re still a ways out from the release, don’t be surprised if The Brand With Three Stripes unveils even more motorcycle-inspired kicks for the occasion.